Embark on an adventurous journey: beat match-3 levels, restore and decorate different areas in the garden, get to the bottom of the secrets it holds, and enjoy the company of amusing in-game characters, including Austin, your butler, and a funny dog!

Gardenscapes is a match-3 puzzle that plays like most popular mobile games of the genre. You touch an element on a grid, and drag it up, down, left or right. If 3 or more are aligned, a match will be made and they’ll disappear, if not, they’ll go back to their spaces and you’ll have to look for a match to be made. 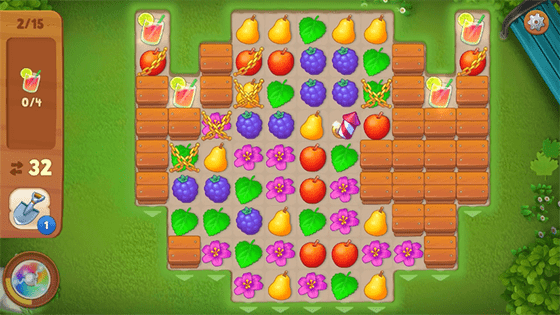 Whta makes this game different than most, is what happens when you match together 4 or more figures together. In most games, you create a line bomb that explodes vertically or horizontally taking away a whole row or column; but here, you create a bomb that affects its surrounding spaces, and the bigger the match, the more powerful the bomb. With a 4-match, you get a firecracker that explodes affecting a single space to each of its sides. If you create a match-5, no matter if it’s a line, or a line that has 3 figures vertically and 3 horizontal sharing the same figure in a T or X shape, you get a bomb, that explodes affecting 2 spaces around. With a bigger match, you get a powerful TNT stick, and if you ever manage to create a match-7, you’ll get a TNT barrel, that takes away a huge chunk of the grid. In order to activate an explosive, you just have to switch it with whatever, and another distinct feature of this game, is a Bomb Meter in the bottom left corner of the screen, which fills with every explosion. Once is full, you’ll get in the grid a rainbow sphere, that when switched, it eliminates all figures of the same color you switched it with. If you have many bombs on screen, and with one exploding you activate more, the rainbow explosion meter will charged up much faster. The level objectives are typical of a game of the genre, collect a certain amount of a specific figure, get rid of boxes or other objects in the grid, clear spaces covered by something until the whole grid is cleaned up, get a special item to drop down to the bottom of the grid… The usual. You also get to use a special shovel item to take away any figure on the grid when you want, and at the start of each level, you can select 3 boosters to help you, a couple of bombs, a rainbow sphere, or a dinamite stick. As you complete the levels, you’ll see the story advance and how you and Austin the butler keep on bringing the mansion’s garden to its former glory.

Gardenscapes features 3D certoony looking models over great looking 2D images that give the impression of being handpainted. The garden looks beautiful in HD displays, and it’s not static, you can see leaves and flowers blowing in the winds, water flowing from the fountain, birds, bees and even squirrels running around. And everytime Austin the Butler or another character works on the garden, you can see them performing the actions. 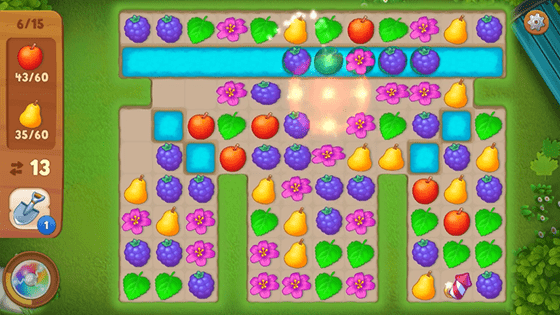 The story is told by characters shown in big very detailed portraits speaking through text. And when they show up on the garden, you can see them in 3D moving around and interacting with the enviroment. Everytime you build something in a new area or fix an old object in the garden, it doesn’t just appear or gets changed just like that, you can actually see workers constucting the new fence, or the Carpenter making a tree house. The garden is huge, and when you plant flowers or add something for the first time, you always have 3 different options to choose from, giving the game lots of visual combinations to have the garden just as you want. While you’re playing, the background is just a grass area and never changes, and the grid elements just change shape and move around, without new animation frames. But the explosions and rainbow effects look pretty good, and you’ll probably never get tired of playing over the same background given the addictive gameplay.

Gardenscapes tries to do a few things different gameplay wise. Overall it doesn’t geel like anything you haven’t played before, but that doesn’t mean it doesn’t hook you into going at a new level, since the controls and mechanics are excellent, and you can still move around elements in the grid while a match is being made, giving you a fast puzzle experience and the chance of creating greater matches and combos with the new figures falling down. 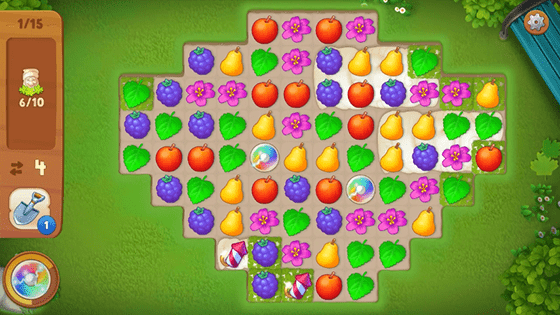 What makes this game unique, is the amount of effort Playrix invested in the story, characters, dialogs and making the garden look awesome. While it is not the core of the puzzle genre, working on the garden, getting to know the town’s people and seeing how they all interact makes everything lively and a very enjoyable experience, not common in titles that aren’t RPGs. The music is also very relaxing and fits the garden great, and you can tap on some objects to make them shake a little, and Austin can react to some actions, like if you shake a fower pot, he will remember to water them, or if you tap on an animal, it will get scared and run away. The garden is just filled with details like those that make you immerse yourself in it.

Value for your Money 98%

Gardenscapes is free on Google Play and the Apple App Store. You won’t see any advertising, and while you can buy golden coins to get boosters and items for your garden, is very easy to earn them just by playing, and the most explosions, combos and cascades you perform in a level, the more coins you get at the end. Also, if you have extra turns left, you’ll get a bomb or firecracker in the grid for each one, being able to earn much more golden coins, so a good player shouldn’t have to buy anything with real money here.

Gardenscapes is a perfect game for puzzle game fans. It has just enough changes to the core match-3 puzzle mechanics to make it seem like a fresh experience, but what really sets it appart from other titles in the genre, is the story, awesome graphics and just how complete the experience of taking care of the garden is. If you’re looking for a new casual puzzle to try out, download now. Pros Cons