One More Jump is a casual platformer where you take control of a square character that must overcome obstacles and reach the golden goal of each level, collecting diamonds along the way. 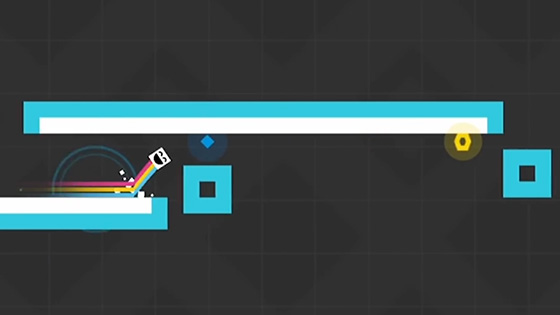 The square starts out moving automatically on the white side of a platform, and if it touches the colored parts, it will get destroyed, and you’ll have to start over. The only thing you do is tap anywhere on the screen to jump, sometime to a different platforms, and other times you reach the end of the road you’re taking, and have to get to the other side of the same platform you’re on, that also has a white road; gravity will change and the square will land upside down. In later levels, you’ll encounter perpendicular walls, and you’ll have to jump before reaching the colored corners, and gravity will change to the side. After a while, you’ll also find magnetic places that hold the square until you’re ready to make the jump, moving platforms where you must tap on the screen at the right time, and platforms that change position when you land on a certain place. There are also arrows that make you jump very high when you pass over them, and moving platforms you’ll get on, that will be advancing at your same speed, and you’ll have to avoid obstacles that will appear along the way.

One More Jump features 2D geometric visuals, that’s commonly used in casual titles of this same style. They look simple, but have enough use of color, patterns and special effects so it doesn’t look too dull. 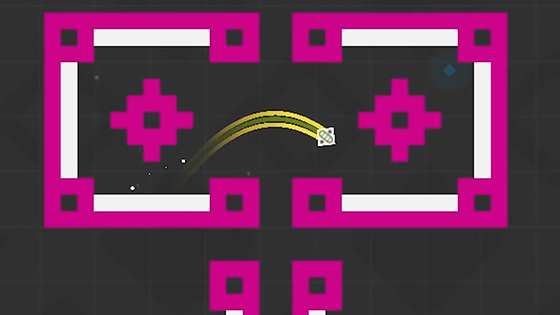 You’re always seeing the blockcharacter, which can be a little costumized, leaving a colored trail, over the white roads on colored platforms, all with a dark gray square pattern. It isn’t very eye catchy, but the animation is smooth, and most of the time the camera is following the action, but there are some levels where all takes place in the same static screen. When you jump, you’ll see sparks and tiny golden pixels exploding where you land, and that’s a nice touch that gives the game a little more visual appeal. Overall the graphics aren’t very complex, but they fit the gameplay just fine.

One More Jump features over 70 unique levels of increasing difficulty. While it starts out easy enough to beat the first levels on just a couple of tries, you’ll be getting pretty challenging stages that will need many attempts to overcome, more so if you want to gather the 3 diamonds on each level. 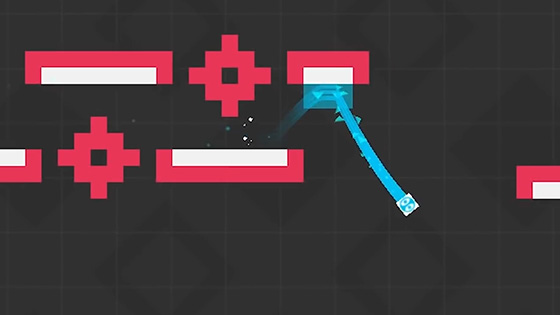 There’s also an endless mode, you can customize the square character, and the music is pretty good. The game isn’t as addictive as Geometric Dash or other popular titles in the genre, but if you enjoy a one-tap challenge, you’ll surely be playing for hours until you beat every stage.

One More Jump is free on Google Play and the Apple App Store. You’ll see a video ad after playing about 4 or 5 stages, but that’s to be expected. Other games like this one show you an ad every time you lose or win a level, but here you won’t see a banner ad every minute or so, it isn’t intrusive at all.

One More Jump is meant for casual user that want to play a one-tap game, but with higher challenge than usual. Every level is pretty unique and most gamers won’t beat them at the first try; and there’s a lot of replay value if you want to get all 3 diamonds on each stage. Check it out if you enjoy simple but hard platformers where you only tap to jump. Pros Cons