Dash your way through dozens of deadly traps and puzzles, but be wary: You have only 10 seconds to reach the exit of each room and Duke can’t stop moving without hitting something first.

In Pixels Advance, you take control of a round munchy avatar that is eating coins in a black space, while avoiding Space Invader enemies, shooting 8-Bit tanks and giant monsters. Your character is always moving and you just swipe your finger up, down, left or right to change its direction. 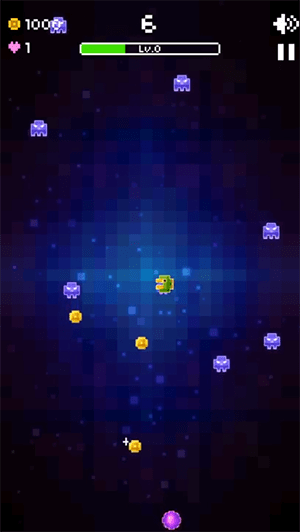 In the top pasrt of the screen you can see a green bar that fills a little everytime you collect a golden coin. When you completely fill it, you reach another level, more enemies will appear, and they will be stronger and deadlier than the ones before. Good thing you can collect power ups to eliminate them. At random times, on the level you’ll see some weapons you can pick up, that work for a limited time. There’s a flamethrower that automatically activates and burns everything in font of you, a machinegun that shoots spread bullets in 5 ways, a huge laser that takes out all monsters in a wide area, and something that works like the Power Pellet in Pac-Man, making you huge and invinsible, and able to eat enemy creatures just by passing over them. Just like in classic maze arcade games, when you reach the end of the screen and keep going, you’ll appear in the opposite side of the screen; so if you go all the way to the left, you’ll re-appear on the right, like in Pac-Man. And just like in that game, not only you can collect yellow balls, there are other items to pick up. Sometimes treasure chests will pop up out of nowhere filled with blue coins. These don’t give you bonus points, but are currency to buy new avatars to play with, extra lives, and stats like speed and more lasting weapons.

Pixels Advance goes for a retro low resolution visual style, and you can make out the squares in the characters at simple look, but there are a few added effects to make it more appealing to modern users. 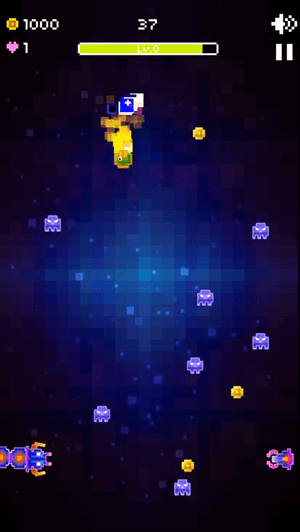 The background doesn’t really change, and it’s similar to an 80’s space shooter, with tiny shiny squares passing as stars, and a nebula in the center with a circular gradient of electric blue. The avatar and monsters have simple animation made of 3 frames, but they do blow up in a flashy explosion with special effects like sparkles and transarency added. They weapons look pretty cool, and while you see monstly blue-ish tones in the game elements, the yellow and red of the fire really stands out and makes the SHMUP part of the game quite appealing. There are many avatars to purchase in the game store, and while they are pretty tiny, you can quickly tell what they represent, like a certain jumping Italian plumber with a mustache.

The overall objective of the game is just to try and beat your record. Reaching a higher level, collecting more coins and getting a higher score. And that’s it. The aren’t any extra levels with a different background or something that truly looks different than the same level where you start. 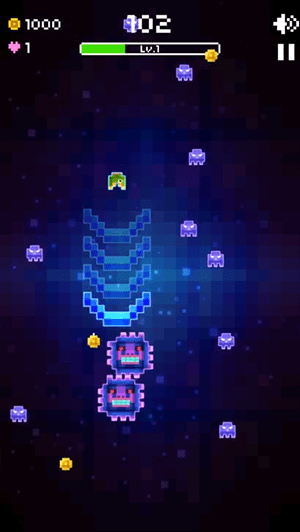 The gameplay is simple and mixing touch mobile gameplay with an old school arcade performs well enough, but just swipping your finger to change direction can become boring after a while. Maybe being able to stop, move with a virtual joystick or arrows, and having a button to activate weapons would’ve have made the game more interactive, hence more fun to play. As it is now, it’s an OK distraction, and it may appeal both retro gamers and modern casual users, but since overall you’re just playing the same level over and over with slightly higher difficulty (like the Arcades in which is based of) there isn’t that much replay value here.

Value for your Money 86%

Pixels Advance is free on Google Play and the Apple App Store. When you lose, you have a choice to continue by paying with golden coins or watch a 20 seconds video ad. You can purchase coins with real money through in-app transactions to level up your avatar or buy new ones, and you could earn enough golden coins to unlock everything just playing, but that will take too long for the average user.

Pixels Advance is a good mix of old school and modern mobile gameplay, and it’s recommended for both veterans and new players, but just beating your previous record can become repetitive quite fast, and since it lacks achievements or other stages, it may entertain you for an hour or two tops. Give it a chance, if you’re into retro arcade gaming, this may keep you busy for longer than that. Pros Cons