Take control of your Polar Bear and ride the snowball down the mountain. Watch out for the boulders, trees and wildlife. It’s a Polar Bear running on a giant snowball down a mountain, what more do you want?

Roller Polar is an infinite jumper where you take control of a bear trying to survive on a giant snow ball. The bear can only jump to avoid rocks, trees and animals that the snow ball takes, but can also collect coins to unlock other bears. 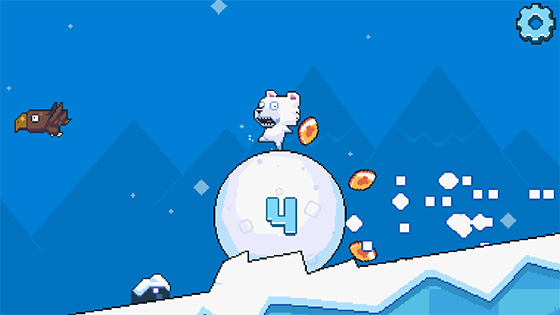 Tap the screen to jump, and tap again to perform a backflip that gives you an additional mid-air jump. Everytime you dodge an obstacle, you get 1 point. Besides the stuff that the snow ball picks up like beavers, reindeers, penguins and other cold wather animals, sometimes you have to avoid birds flying around, and after getting 15 points, you’ll find another snow ball and you need to jump on it, and this one is gonna move a lot faster. The overall objective is just to survive as long as you can, if you get hit by an obstacle or fail to jump on the other snow ball, it’s game over, and you can not continue by exchanging coins or something, you have to start over. At first it starts just as a casual jumper, but by the time you get 20 points, you’ll test your gamer reflexes to the max. The game is only about setting a higer record, but it has an addictive factor that may draw you in until you get at least 50 points.

Roller Polar feature great pixel art and animation, the animals look like out of a cartoon, are very expressive and have funny reactions to what’s happening in the game. 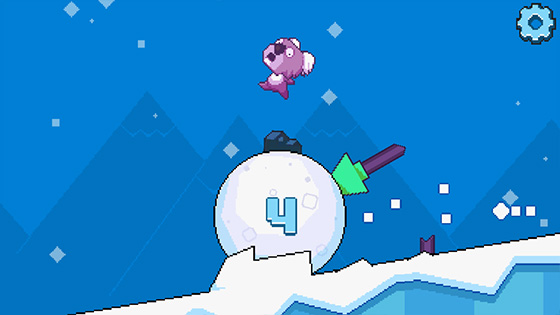 You can see snow being lift of the ground bahind the giant ball, and some other ambience details, but overall there are not many elements in the game, just a blue background with a few montains, your character on a ball and stuff to dodge. It’s worth mentioning that the setting changes from day to night, but the background could have used a little more variety. By any means, it doesn’t look bad at all, but it’s not Nitrome best work in the visual department, and you’ll see most elements in the game in just a few minutes.

Roller Polar is a simple casual arcade game where you’re only interaction is tap or double tap. There are not any additional challenges, or stages, just one infinite level, and while it’s fun for a while, after getting the record you’re aiming for, you may not play it again. 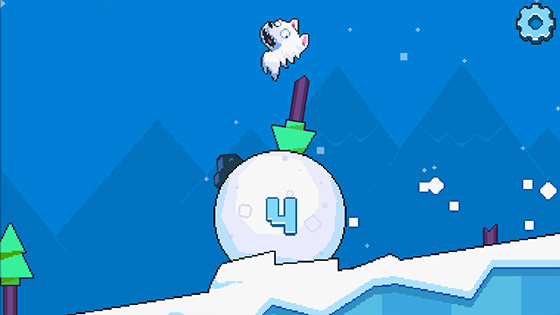 The chiptune music and graphics are well done, but gameplay wise it won’t keep you entertained for long. It’s a nice app to test your reflexes and you may laugh at the animals reactions, but since there are not achievements or anything to give you an extra challenge. It lacks replay value. It’s worth mentioning that there are 6 other bears to unlock, like the koala and grizzly, but you may get bored before collecting all the golden coins you need to buy all characters.

Roller Polar is free to play on Google Play and the Apple App Store, but you’ll see a banner advertising every once in a while, but it’s reasonable to see an ad after losing 5 times. There’s also an Ad Free version you can get for $1.50, and given que overall quality of the game, it may seem a little expensive, since you can find mobile games with more content for less than a dollar.

Roller Polar is a simple casual arcade game that will test your reflexes like few infinite jumpers do. But while the pixel animation is fun to watch and the chiptune music is a little catchy, it doesn’t offer enough content to keep you playing for more than a few minutes. It’s a good casual game to try out for a while if you enjoy one tap, double tap gameplay. Pros Cons