Forest Rescue by Qublix is a Match-3 Puzzle game where you help forest animals to fight against evil beavers that are destroying their homes. Power up their magic attacks by matching fruits and plants and help them restore peace by beating winning the hundreds of levels with unique challenges.

Forest Rescue is your average Match-3 Puzzle game where you touch a figure on the grid and move it one space up, down, left or right to switch it with the fruit, acorn, honey drop, leaf or flower in the grid. If 3 or more figures get lined up, a match is made and they’ll disappear. If not, they’ll go back to their own spaces. 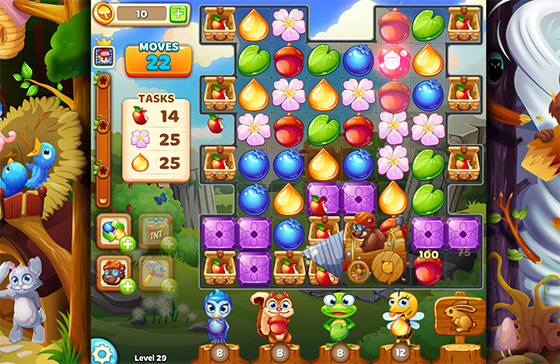 The objective of each level is to collect a certain amount of figures as shown in the left part of the screen. You have limited moves to complete your task or you’ll have to start over. In the lower part of the screen the forest animals will be collecting power from their own type of figure and throw a bomb figure at the grid once they fill their energy meter. This special figure explodes when included in a match, or when you just switch 2 bombs. The blueberries feed the bird, who gives you an horizontal bomb, the squirrel eats acorns, and gives you a vertical bomb, the yellow bee gives you an X-Bomb, which explodes in 2 diagonal rays of light, you need to match honey drops to get this one, and finally the green frog gets power from the leaves, and gives you a bomb that explodes affecting the spaces surrounding it. There are other boosters you can select to use when you want in the lower left side of the screen. There’s a mole that gets into a drill vehicle and takes out a whole row, a hammer that lets you disappear any figure in the grid, and a power up that lets you make a switch even if no match is made. As you advance you’ll encounter obstacles in the way like baskets with apples, which can be switch, purple runes that can’t be moved, and figures that have butterflies on them, and you’ll be asked to match them until you get a certain amount of them to beat the level. Also, there are boss fights where you have to defeat the boss beavers by matching figures next to them, but they’ll have special helmets that will protect them from matches of a certain color. Overall is just standard casual puzzle with the power ups you’d expect from a game like this, but just with a forest animals theme, that has also been used several times by other games in the genre.

Forest Rescue features a 2D hand-drawn art style that looks like a children’s fairy tale book illustration. The characters are very colorful and you can see shading and shining in their design, but they’re not very expressive or have many animated movement. 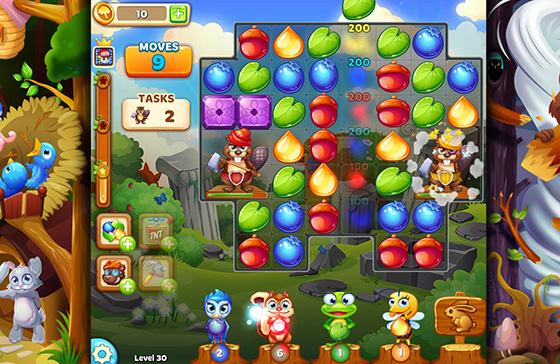 The figures in the grid look pretty good and they disappear with fancy light effects, and you can see how the energy of the fruits and such goes to the animals below the grid. The boosters also feature nice explosion animations and the way more figures fall down and fill the grid again looks smooth and bouncy like a kid’s cartoon. In the boss fights, you can see the beavers gradually becoming more and more damaged, and when you attack them with a match you can see clouds of dust, sparks and stars floating around them. It’s also worth mentioning that in the world map, every time you complete a level, the animals build a house over it, and it’s a small detail that makes the whole game come alive by giving the characters more actions even when you’re not playing.

While Forest Rescue looks better than your average mobile puzzle, gameplay wise it doesn’t offer anything you haven’t seen before, and actually if may be a little slow-paced if you’re used to playing modern match-3 games. 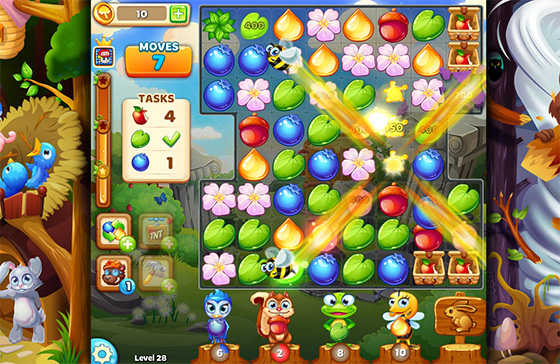 There are hundreds of levels to play, and as you go on you unlock new animals and power ups, but after about 30 levels you may feel that you’ve seen everything the game has to offer and then look for something else. While there’s a story and concept adapted for the game, it’s not really something interesting, and the pretty graphics won’t keep you playing for hours. It’s your standard puzzle, a good one, but you can’t really call it among the great popular ones available now. house over it, and it’s a small detail that makes the whole game come alive by giving the characters more actions even when you’re not playing.

Forest Rescue is free on Google Play and the Apple App Store. It doesn’t show banner or video advertising, and while you can purchase boosters and extra turns via in-app transactions, they’re not necessary to enjoy the whole game. Still, for 5 extra turns when you lose, you have to spend 20 golden coins (the game currency) and 15 coins are worth $1. Maybe it’s a little too much to pay over a dollar for just 5 moves.

Forest Rescue is a nice option if you’re looking for a casual match-3 puzzle game. The forest theme is adapted with a pretty visual style meant for young players, and the gameplay is pretty simple, but it just gets repetitive after a while. If you’ve been playing games of the genre for a while, you won’t see anything new here, and after 20 levels you may leave it at that and look for another title. It’s only recommended if you’re bored and looking to switch figures just to pass time. Pros Cons