Play pixel version of the most addictive puzzle game ever. Enjoy the colorful graphics and chiptune music in the style of Nintendo game console. Warning! This puzzle game is incredibly addictive.

In 2048 pixels you’re objective is to reach that number. You have a grid with tiles, starting at number 2, slide your finger on the screen left, right, up or down to move all the tiles all the way to an edge of the grid. If two tiles with the same number touch, they’ll merge into a tile with the added number, so 2+2 = 4, 4+4 = 16 and so on. 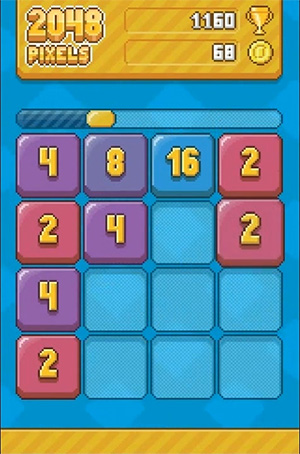 After each move, another tile with number 2 will appear at a random space in the grid, so try to merge tiles in every turn. As you go on, you’ll have less space and it’ll become harder to make the right move, so plan ahead. While the concept is quite simple, and has been use before in games like Letter Monsters, this is an addictive puzzle that will have you trying again and again to get a higher number tile. After getting 256, thins start getting quite hard.

2048 Pixels, as its name says, features pixel art, like something out of a 2D Nintendo console. Each tile has a distinctive color, with a big yellow number so you can see its value. 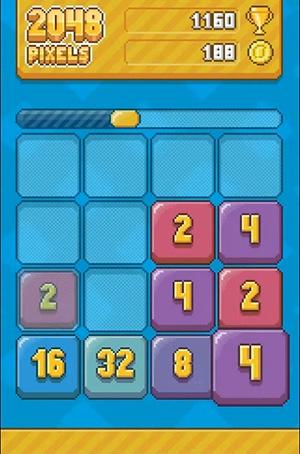 The animation is quite simple, all pieces slide to the side you want quickly, and the merging animation is fast and nothing fancy happens, like sparkles or shine or something. When a new tile appears in the grid, is just a transparency animation. The background is a blue pattern slowly movin around. It looks better than just a flat color and it gives a little more “life” to the game, since you only see squares and numbers.

2048 is a modern classic, and there are many clones available in mobile stores that add little to zero improvements to the formula. And while 2048 Pixels feature a distintive visual style, you’re basically playing the same thing as the others. 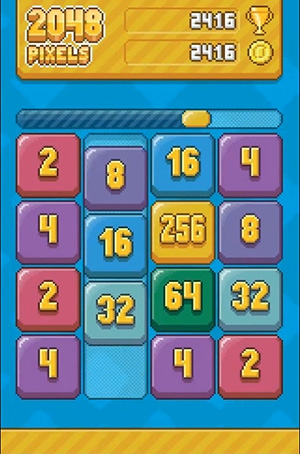 You can see your current score and the previous one on the top of the screen, and there are leaderboards to compare your records with players all over the globe. The music is also a nice chiptune tune, but besides that and the pixel art, not much has been done to really stand out among other 2048 games.

2048 Pixels is fre on Google Play. You won’t see banners on top or at the bottom of the screen as in other similar games. You’ll see an ad after losing a play, but that can take several minutes and is to be expected from this kind of apps.

2048 Pixels is a fun and addictive puzzle with graphics and music that will be liked by Retro Game enthusiasts and simple yet challenging gameplay that is way different than the match-3 games that you’re problaby already tired of. While there are many 2048 clones out there, you may want to try this one in particular if you enjoy the look of classic videogames, just remember that after getting the 256 tile things get HARD. Pros Cons