Embark on an endless snowboarding odyssey. Journey across the beautiful alpine hills of their native wilderness, through neighbouring villages, ancient woodlands, and long-abandoned ruins.

Alto’s Adventure is essentially a snowboarding game where you capture alpacas, collect golden rings, perform tricks and combos, and use power ups to travel greater distances and get a high score. 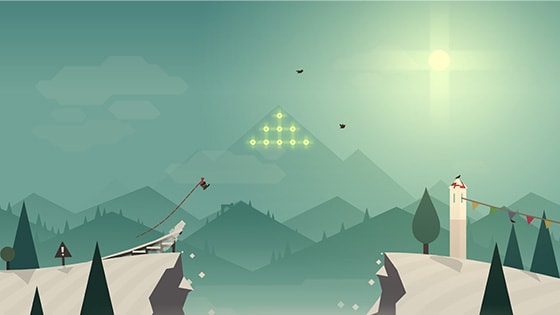 At the start of the game, Alto jumps onto his board and starts sliding down the hill. He will continue to move forward all the time, but you can gain speed by performing tricks such as summersaults or grinding on the building roof edges and power lines. You’re only interaction in the game is to press anywhere on the screen to jump, and keep your finger touching the screen to start rotating backwards. It may sound simple, but as you go on, you’ll notice that timing is everything. The level is procedural generated, which means that while you may see many common game elements, no 2 walkthroughs will be the same, so you must be extra careful to see ahead of you in order to jump at the right time. When you’re just starting out, the camera will be closed to Alto, but as you gain speed, it’ll zoom out so you can see far ahead. Each time you play, you get 3 missions to complete in order to gain extra points. They can be objectives like capturing 3 alpacas, performing 2 summersaults, stay in the air for 3 seconds or reach a certain distance. When you crash into a rock, fall down a pit or land on your back in the snow, the game will be over and you’ll have to restart. With the coins you collected you can upgrade your power ups, making the magnet that attracts coins last longer, or the blue feather give you a higher altitude when you collect it.

Alto’s Adventure has been called “a work of art” in the visual department. If has a unique style not commonly seen in games, which looks like a  painting in motion. 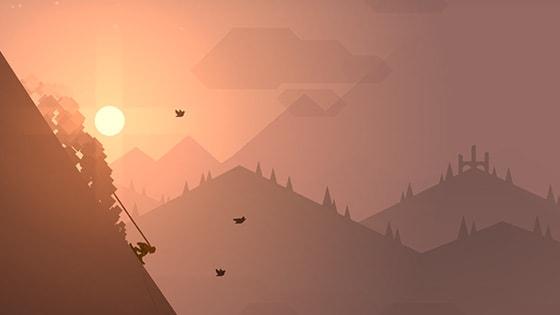 The backgrounds aren’t very complex, but some buildings in the villages and different elements of the alpine hills are actually in 3D, and you can notice the models changing perspective when you pass next to them. There are many layers of mountains with trees and other objects sticking out that you can see in the scenario; some are even animated, like birds, clouds, snow falling down and even shooting stars. You can play at different times of the day, which can make the same spot look entirely different depending on the position of the sun, since this game has dynamic lighting condictions, and also the weather changes, so you can be snowboarding with a clear sky one moment, and the next you’ll be in the middle of a blizzard or a thundr storm.

While Alto’s Adventure is not exactly an original gameplay formula, it’s so well executed that you’ll be playing again and again. Everything from the graphics, to the music and the “flow” of the game is of the highest quality, so you may play for over an hour without noticing just how long you’ve been at it. 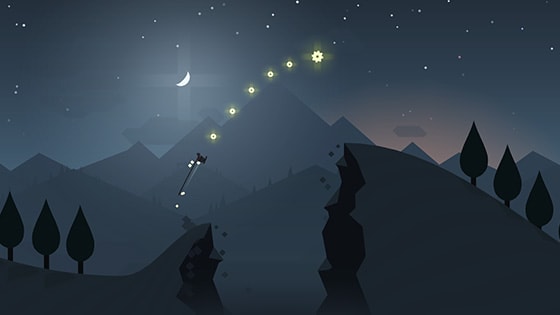 There are many infinite runners that have a level generated at random, but most of them feel pretty much the same, since they repeat the same obstacles way too often and it’s basically the same terrain; but here you’ll feel like if you start on top of the same mountain, but each time take an entirely different path. There are over 180 different objectives to complete while you play the main level, and you can also compete in the leaderboards trying to take on the best trick combo, highest score, and farthet distance reached.

Alto’s Adventure is free on Google Play and the Apple App Store. While playing normally you won’t see any advertising, but you may see some advertising after you lose and go back to the title screen, which is to be expected from these kind of games. There’s a premium version with no ads, and also gives you one revive per play, and if you’re enjoying this game and plan to play much more, it’s totally worth it.

Alto’s Adventure is a fresh new entry into the procedural generated adventures. Everything here is of the highest quality, and it truly feels like nothing you’ve played before. The overall atmosphere is relaxing and a true work of art. There is room for improvement in the upcoming sequel, but you should definetely check out this snowboarding title wheter you’re a casual player or a runner genre enthusiast. You won’t be dissapointed. Pros Cons