Running Fred is a 3D runner platformer with the camera behind the character, a redhead kid being chased by Death, or “Grimmy” as is called here. Fred is always running, and you move him to the sides by tilting your device left or right. To jump, you tap on screen, and you can tap a second time for a mid-air jump. If you jump on to a wall and keep the screen pressed, you’ll perform a wall-run for a short time. There are also Blue Arrows on the floor, that give you a Turbo Boosts when you run over them. 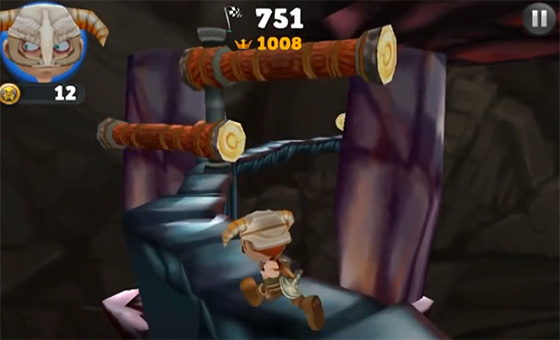 Besides the Main Missions, you can play the Endless Mode, or Challenges that appear from time to time. There are many obstacles to overcome on the levels. Some slow you down, like bumping into furniture, boxes or wooden barriers, others stop you and take some of your health away, like crashing into a stone pillar, and there are many dangerous stuff that can kill you, like giant blades and steel spike balls, and of course, falling into pits. The overall objective of each level is to reach the door at the end and escape Grimmy. You can collect coins called “Skullies”, which you use to upgrade your abilities, such as to last more time wall-jumping, or you can buy other levels and costumes for Fred. Golden Coins are worth a Skullie, but you need to collect 5 Silver ones to earn a Skullie. If you finish the level with 4 silver coins, yo uget nothing. Also, when you lose, the distance you covered can turn into currency, so you can power up or buy an item and try again. To help you on your missions, you can buy items such as the magnet to attract coins, a turbo device on your back, a shield that protects you from hazards like fire and spike traps, or an extra life to continue where you die. There are also Treasure Boxes, and Mistery Boxes, that contain Skullies and Items, so search for them. Sometimes they’re pretty well hidden or hard to get.

Running Fred features average 3D graphics by today’s standard for a mobiel game, like an early PS2 title. The animation is OK, and Fred has fanny expressions and reacts to each obstacle or death trap accordingly. There are many ways to die in the game, but instead of looking overly gruesome, like a rated M game meant for adult players, it’s a strange mix of humorous violence with cartoony looking blood, like a game meant for players on their late teens. 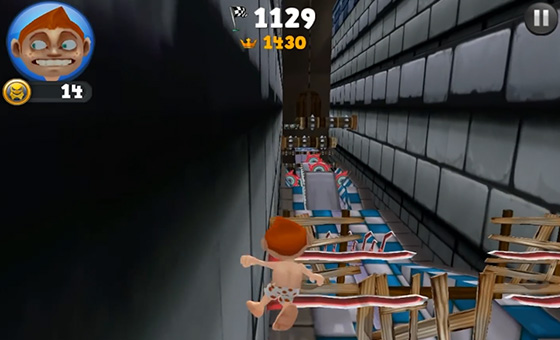 The game looks a little too dark sometimes, but you won’t have any trouble seeing what kills you and what it’s a collectable item. There are even some hints, like a red cross on the floor that warns you about a falling death device when you get closer. Every level has unique dangers, like lava pits and fire on the Caves, blades and maces at the Manor, poison gas and electric stuff at the Lab, and so on. Instead of a traditional energy bar, you can see Fred’s face in the upper left corner of the screen, which shows his overall status. Then you bump into things or hit a non-deadly trap, you’ll start getting bloody. When you see him in pretty bad shape, it’s time to be extra careful.

Running Fred has many levels for you to play, with varied settings that offer different obstacles to overcome, and each one has unique music, which is a pretty nice arrangement, and not often seen in this kind of games. 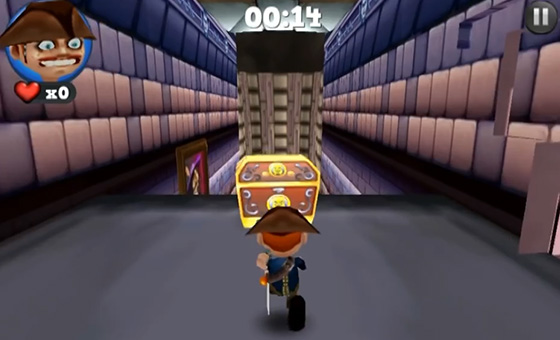 You can play Classic Fred, missions that you can complete in about one minute each, Endless, which have difficulty settings, and Challenges, that are pretty hard, meant for advance players. There are hidden treasures so exploration is a part of the game, and you can come up with strategies to collect lots of skullies, or try to get a Gold Rank at the end of each level. Graphics could have been a little better, and after playing 3 levels in each setting, you may feel that you’re playing the same mission with slight changes, but still is a pretty good option for fans of the runner genre.

Value for your Money 30%

Video Ads show up way too often, so if you get annoyed pretty fast by them, you may not enjoy this game at all. At least you get some skullies after each ad, but still, you may see a 30 seconds ad, play for less than a minute, and then see another one… You see 2 of them just by browsing aroudnt he game’s menu, before you even get to play a mission. So keep that in mind before downloading it for free on Google Play of the App Store.

Running Fred is a 3D good runner, and a nice choice for fans of the genre. If you don’t like infinite levels, and want to try out missions with an actual goal to get to, this one is for you. Just keep in mind that video ads can get pretty annoying fast. Pros Cons