Sweet Sins is an original kawaii infinite runner where you lead Lust, Gluttony, Greed, Sloth, Wrath, Envy and Pride on their journey through redemption!

Sweet Sins: Kawaii Run by the makers of Happy Hop: Kawaii Jump is an infinite runner where you take control of one of the 7 Deadly Sins in their way through hell, avoiding obstacles, fighting demons and collecting stars along the way. 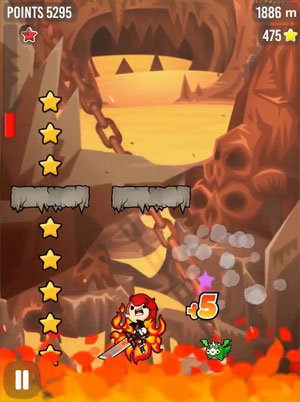 Your character moves up automatically, and she can be in the middle of the screen, or you can swipe your finger left or right to move to the sides. When you see a rock platform, you can move aside or tap on the screen to do a quick attack, where she tackles forward. This only works with weak platforms, since later on there will be unbreakeable obstacles made of metal. If you bump into an obstacle, you’ll lose speed, and the flames of hell below you may get you. If you get burned by the fire, you’ll lose your life, and have to start over… Unless you win an extra life in the roulette game that appears, in which case you’ll continue with your adventure. Besides platforms to dodge or destroy, some blocks will have fireballs around them, you’ll find hard platforms with spikes that send you all the way down with one hit, and winged demons that can attack you with thunder bolts. You can attack enemies or just avoid their attacks, but also you can find a thunder items that gets rid of all the enemies and obstacles in the screen. Finally, you collect stars to unlock new characters and power up your initial sin. As you level up you can become quicker or get a speacial ability, like a new long rage attack that you can activate tapping a new icon on the lower right corner of the screen. Besides yellow stars, there are pink and green ones that are worth more, so try to get them, but they will be a little harder to reach. Also, there’s a magnet item that attracts them to you.

Sweet Sins features hand-drawn 2D graphics. The characters look round and cute, and have a childish appearance, making it a family oriented game. And the way they’re adapting sins really fits them, like Sloth is a girl with payamas sleeping, Wrath is a mad warrior, and Glutony looks like a stawberry cupcake. 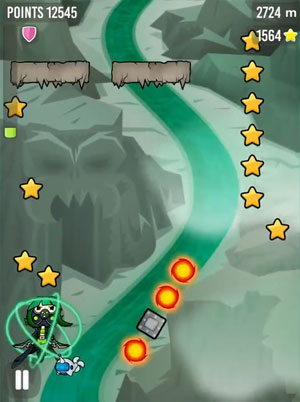 The animation looks OK, nothing too fancy, but the enemies move around and react when they see you, and their magic powers have some transparency and shiny effects to make the visual experience more enjoyable. The backgrounds look nice, and even if it is supposed to be hell, and you see rocks and caves with the shape of skulls, they don’t look really scary, and have bright colors that fit the overall theme of the game. Also, when you change stages, you’ll pass through something more resembling heaving, and the backgrounds will be flashing colors and rainbows at high speed, giving the game more visual appeal.

Sweet Sins has everything you’d expect from a game of the genre. Obstacles to avoid, enemies to fight, items to collect, power ups to use and many unlockable characters. 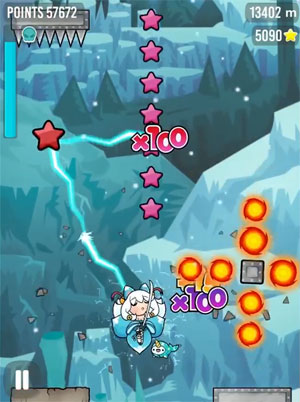 Besides the Sin you’re controlling, you can have 2 Miimos from Happy Hop helping you out. They boost your abilities or give you extra stats, like they can double up the number of stars you collect at the end, or amke you 5% faster. The roulette game and miimos add something extra that’s not that common in this kind of games, and while it has good music and voices, they’re not really outstanding. Overall, Sweet Sins is a pretty good game, but not really the best endless runner you can try right now.

Sweet Sins is free on Google Play and the Apple App Store. You’ll see an ad once in a while when you lose, as it’s expected from this kind of games. You can also buy stars with real money to unlock new characters and miimos, since with normal gameplay it may take a really long time; but it’s not necesary to spend cash here in order to enjoy the full experience.

Sweet Sins is a nice runner with cute visuals, simple gameplay and an interesting kiddy interpretation of underworld beings… It’s a good game in general, just not really that great, but entertaining enough to play until you unlock all 7 sins, and maybe try and get all the miimos. Check it out now, it’s free. Pros Cons