If you enjoy infinite runners/jumpers, check out the new twist to the genre with Sky Hero by Kokonut Studio. Help our Sky Hero fulfill General Barbas’ last wish and make it to safety, dodging saws carried by birds, cannon balls, rogue mustached barrels, and more craziness.

Sky Hero is an Infinite Faller where you tilt your device or touch the left/right part of the screen to move a soldier to the sides in order to avoid obstacles like saws carried by birds. 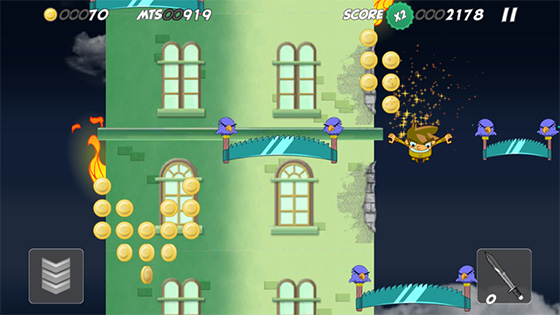 The overall objective is to go down the greatest distance you can, while collecting coins and performing certain actions to increase you score. In the top of the screen, there’s a giant fire monster trying to catch you, if it touches you, you lose a life. Enemies and obstacles in your way don’t really kill you, what they do is slow your fall, so the fire monster can get near you to finish your fall. If you get hit once, then avoid getting hit for a while, you’ll make some distance between you and the flame boss, so you can get hit again without worrying about losing your life immediately. Just be careful to dodge the fire boss when he starts getting dangerously close to you. In your way you’ll also find spheres with a flashing “?” sign that are random power ups you can use. There’s a magnet that attracts coins, a speed booster that makes you fall twice as quick for a while, an armor that lets you take hits without slowing down, a green Irish costumes that makes coins woth double, and so on… Besides the power ups you get with normal gameplay, you can buy boosters in the game store, like a 500 mts Start, a Revive Heart to continue when the fire monster catches you, a quick fall you can activate whenever you want and so on… You can also buy costumes, like animal suits and funny hats, but they’re only aesthetic. The are missions you can complete while playing the endless level like “Fall 1000 mts”, “Collect 1 Power Up”, “Get hit 3 times”, and when you complete 3 missions, you get rewards such as costumes or boosters to equip and use in the next play.

Sky Hero features a 2D hand-drawn art style that looks like a common web flash game. The characters aren’t very complex and have large areas of plain color, you don’t see much shading or shiny spots on them, but the animation it’s nice and the the soldier changes quite a lot when activating power ups, like becoming Super Man when he gets an invicible booster, and the background changes accordingly too. 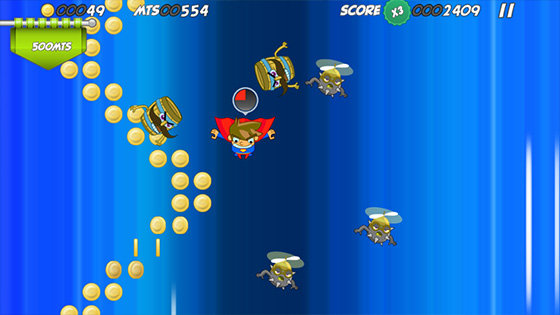 The background is just a building behind you, and at the beginning you just see a castle wall with windows, but after falling a few hundred metters, you start seeing stuff like the enemies destroyed a section of the wall and the inside is exposed, so you can see what the floors look like. And also, some details in the night sky change a bit, like the clouds, stars and other elements. The main character is very expressive, and has a lot of costumes, each when pretty well animated, you can see his clothing moving in the wind and he reacts to hits in pretty funny ways. The enemies just move around without changing much, but sometimes they pass by so fast that you really don’t pay that much attention to them. Overall the visual experience is just “fine”, it works for the game, but nothing really noteworthy or memorable.

Sky Hero has the gameplay elements you expect from similar titles like endless runners and infinite jumpers. There are a bunch of obstacles to overcome, power ups to use and coins to collect to buy clothes and animal costumes, and of course, achievements to make things more interesting. 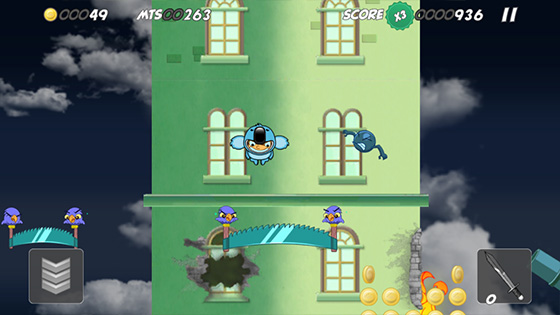 There’s a story told at first with a comic strip, and a little animation plays at the beginning where you see soldier John jump from the roof with the fire monster flying over him, and there’s also a profesor that gives you hints on how to play, and text bubbles appear when you accomplish a level mission, break you previous distance record and stuff like that. In total there are 60 missions to complete, and there are other 2 levels to unlock besides the default castle.

Sky Hero is free on Google Play, with normal gameplay you will see no ads, but when you lose, you have the option to watch a video ad to revive, but only once per game. In the game store you can buy packages of coins and boosters with real money, and some are quite expensive, like a power up that gives you double coins forever, it’s worth about 8 dollars… But it’s not necessary to purchase anything to unlock stuff at a steady pace, the game feels balanced enough to unlock stuff with normal gameplay.

Sky Hero is a nice option if you enjoy endless runners/jumpers, and you want to try out something similar, but with a twist, falling. It has all the elements you’ll come to expect from the genre, but doesn’t really innovate the gameplay or has graphics and music that are on par with the quality of the most popular apps. It’s OK to try for a while, if you have the time you may feel like getting 10 or 20 achievements, but it’s not the kind of addictive game that’ll make you try to get everything it has to offer. Pros Cons