Stay on the wall and do as many zigzags as you can. Just tap the screen to change the direction of the ball. Try not to fall off the edges! How far can you go?

ZigZag is an endless one-tap rolling game where you take control of a ball on a road that advances automatically and the only thing you do is change direction, left or right, by tapping the screen. 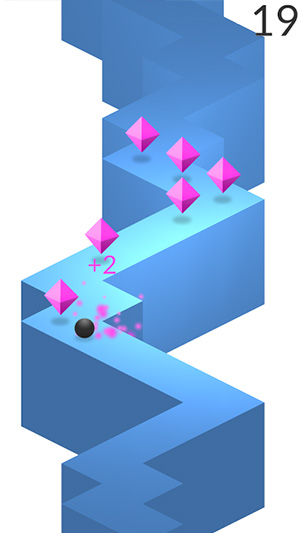 Every time you change direction, you get one point, but there are cristals along the way that give you 2 points when you collect them. As you go on, the road behind the sphere will begin falling down, and the road in front of you will be random generated and keep on going until you fall down. With the cristals you collect, you can buy new balls, like a bigger silver sphere that weights more so it moves slower, giving you more time to react before having to change zigzag again. There are achievements to get such as getting 1000 points or collecting 20 crystals in one go, but overall it’s just an arcade game where you only play again to try and break your previous record.

ZigZag features a minimalistic design, you only see the ball, crystals, the score counter on the upper right corner of the screen and the road that’s made of rectangular prisms over a blank space. 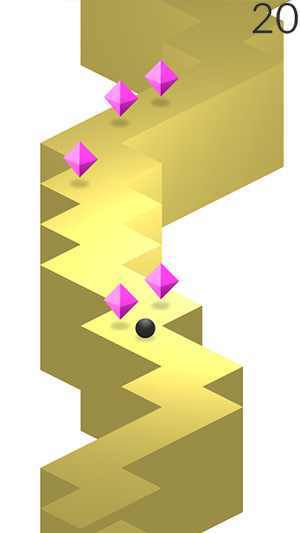 Every few zigzags the road changes color, and you can notice that it’s shiny in the spot the ball is, and darker on the edge of the screen, but there’s nothing much going on. The only special effect you see is a little explosion of pink shapes when you collect a crystal, and that’s about it. The visuals definitely fit the style of gameplay, but it’s not really something you’ll remember.

ZigZag has simple yet addictive gameplay, and it will test your reflexes to the max. At first just trying to survive enough to get 20 points is quite hard, and you’ll keep trying again and again just one more time, but as far as endless runners go, it doesn’t have much going on for it. 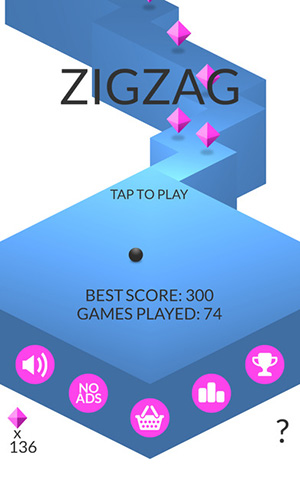 There are games with the same gameplay, but are much more memorable because of their setting, music, characters and such, like Splashy Cats, which also has alternative roads, obstacles, animated backgrounds and dozens of costumes to unlock for your cat. ZigZag just doesn’t have anything to keep you going after a short while, and only users that are really into this kind of one-tap apps will keep playing for longer that 10 minutes or so.

ZigZag is free on Google Play and the Apple App Store. As usual with endless runners, it shows ads after you lose a few times, and it can be a little annoying if you’re not very good and lose every 10 seconds, but doesn’t really interfere with the gameplay. If you go for a really high score and enjoy the game for a long time, consider buying the ad-free version.

ZigZag is a simple endless arcade game to test your tapping reflexes in a random generated road, so every play is different. While it can get addictive trying to break your record at first, after a few minutes most players will look for something else to play, since its minimalistic design, lack of music and one-tap control gets old fast for the common user. Check it out if you just want to pass the time, or you want to test your reflexes to the max, getting 100 points is not easy at all. Pros Cons