Lumber Jacked by Everplay is a retro looking platform adventure with challenging levels that offers a nice experience for fans of classic 2D sidescrollers.

Lumber Jacked is a classic 2D sidescroller platformer like the popular mascot games in the 16-bit era. The controller is really simple, you have arrows for moving left and right, a button to jump, and another button for a dash punch attack. You can also jump in mid-air and use the Punch for a final dash while up in the air. The objective of the game is just to reach the end of the level. Along the way you’ll encounter enemy beavers, spikes to avoid, wooden boxes blocking your path, that you can destroy or use to reach higher places, and moving platforms to reach with your triple jump. 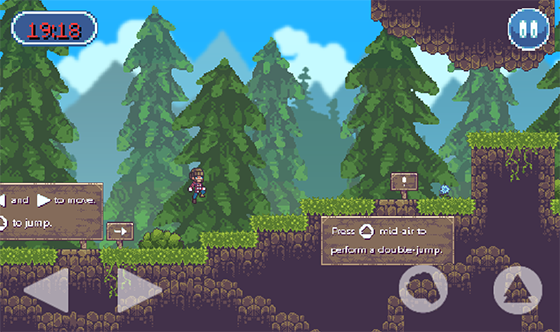 The control works great, after getting used to the position of the buttons on the screen, you’ll be playing just like if you’re holding a console controller. Your character can jump on walls, and after attacking a beaver he can make a mid-air dash again. The levels are short and the faster you beat them the higher your score, but just reaching the end of a level will be enough of a challenge for most players.

Lumber Jacked has a Retro 2D look. The pixel art looks like a mid 90’s console game and it’s nicely animated. There aren’t any fancy effects, just classic pixeled style design. The backgrounds are well done and all elements of the game have a certain charm to it, like the Ninja and Armored Beavers, the Blocks with Faces, Piranhas and moving platforms. While the backgrounds look nice, the game could use some variety. There are forest, caves and rivers, and that’s about all you see. After 30 levels you unlock another world with a different setting, but after a few minutes of playing, the backgrounds get kinda repetitive, and even if it is a lumberjack in the woods, more variety in the backgrounds certainly wouldn’t hurt the game. 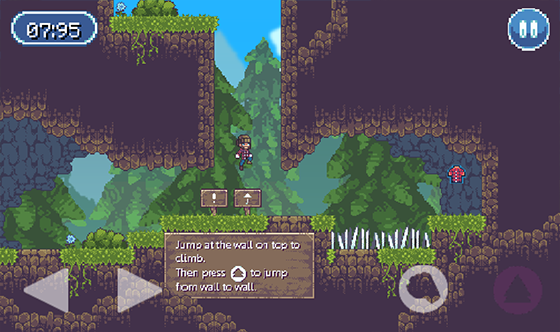 The gameplay is just perfect, with 60 levels for you to beat. The levels are cleverly designed, and they’re a real blast to play for fans of retro 2D platformers like Mario and Sonic. For those looking for an extra challenge, getting a ‘3 Star Rank’ is gonna take quite a while. The game challenges you to beat the level under a certain time, and in order to beat the record, you’ll be playing the same level dozens of times. For expert gamers looking to get 100% of the game, there’s a red ‘lumberjack shirt’ item hidden in the levels that’s very difficult to get, more so if you intend to beat the time record. 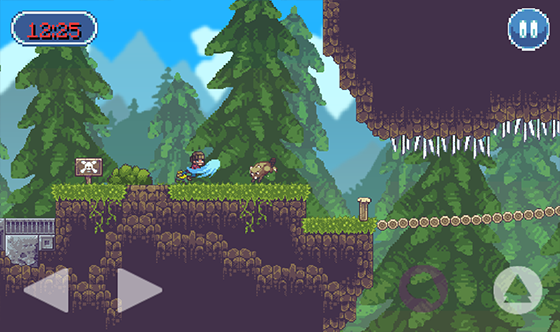 Where the game really lacks, is in the music department. There’s only one song playing for the whole game, and while the tune is OK, it’s kinda short. By 20 levels you may consider turning it off and playing while listening your own favorite songs streaming from your PC or something.

You can buy Lumber Jacked on iOS for less than a dollar. If you enjoyed sidescroller action platformers in Sega and Nintendo consoles back in the day, 99 cents is totally worth it. Over 60 challenging levels that should keep you entertained for at least a few hours. Speed Runners should totally check it out now. There’s a free version on iOS, Lumber Jacked: Wood War, that doesn’t show any intrusive ads. Tt does play a video after you lose about 5 or 6 times in a row, but it really isn’t anything you won’t put up with if a dollar is too expensive for you. The Android version on the other hand, is free, but it has video ads that play way too often for your enjoyment… It’s OK for a little while, but Download the iOS version if you can.

Lumber Jacked is perfect for those gamers looking for a console quality platformer on mobile devices. The control works great, the gameplay is smooth and it really doesn’t have anything to envy 90’s 2D platformers. Pros Cons