Marble Legend by easygame7 is a different kind of Match-3 puzzle game that will test your aim skills and shooting speed. Eliminate all marbles before they reach the end of the rail to discover the treasures hidden in the magic forest levels.

Marble Legend is a Match-3 game that kind of mixes the classics Puzzle Bubble and Magical Drop. In the level, there’s a rail of colored marbles that are coming out of a cave at the edge of the screen and going to another cave found by the center of the stage. You have a marble cannon, and when you shoot and connect 3 or more of the same color, they disappear. The objective of the game is to eliminate all marbles before they reach the end of the rail. 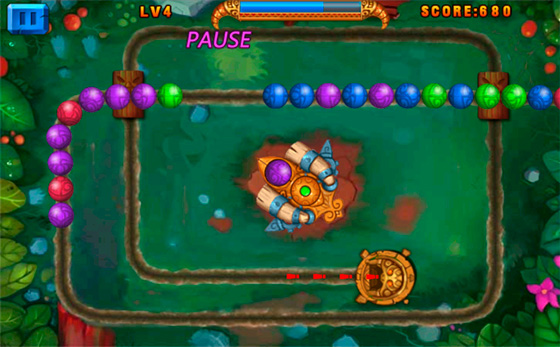 To control the cannon, you touch the screen and drag your finger around to aim, when you release your finger, you shoot the marble. You have one marble ready, and can see which color is going to be the next one. Besides the regular shots, you can get power ups such as arrows that destroy single marbles, a thunder attack that eliminates many marbles close by, a bomb, and a rainbow marble that that takes the color of the one it connects with. When you eliminate marbles in the middle of the rail, the ones in the front will go back, and when they crash into the ones in the main marbles, the whole rail will move back a little bit. If the front marbles and the back ones are the same color and your perform a match when they connect, you’ll perform a combo to boost up your score. Other power ups include Pause, that freezes the rail for a moment, Slow, that decreases the speed for a while, and Aim, which makes your cannon project a “laser sight” for precise aiming. At the end of the level, you’ll get extra points for time, combos made and overall performance.

Marble Legend looks nice and colorful, with a hand drawn green forest look for the background, with details such as rocks, leaves, flowers and spots without grass for a more realistic look. 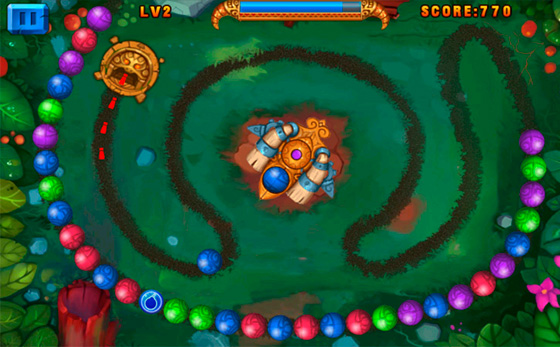 The marbles have a pseudo 3D look accomplished by a sort of aztec pattern and light reflection effect. They’re rotating and react just right to the cannon shooting at them. Special Marbles that give power ups have a glowing icon to be distinguish among the rest, and the special effects such as electric shocks and explosions, while not mind blowing, really add to the visual experience.

Marble Legends is a game formula that started with Puzz Loop back in 1998. It was followed by Magnetica on the Nintendo DS and some other mobile clones. In general, this game doesn’t really innovate or add anything original to the formula, but the touch controls are simple, the power ups and score system are perfectly executed, and there are many levels to keep you entertained for a while. 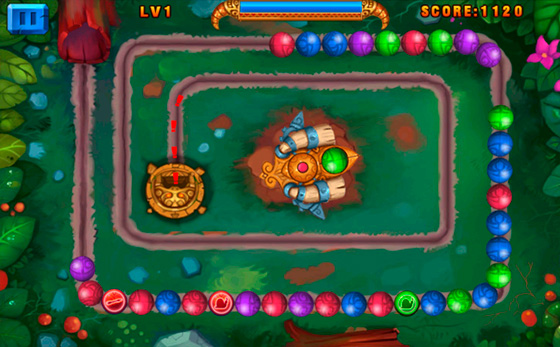 One complain is that there’s only one song playing through all the levels, and it doesn’t change if the marbles get close to the end of the raild, like in other games. Also, other games of the kind have a story mode with cartoon characters and stuff. So while Marble Legends has excellent gameplay and can get pretty addictive, there are other similar games that just have more to offer for the single player.

Marble Legend is free to download on Google Play. There’s always an amazon banner ad showing at the right edge of the screen, but that does not interfere with the gameplay at all, and you won’t even notice it, so check out the game if you enjoy match 3 puzzles, it’s free.

Marble Legend is a free puzzle with perfect touch controls and many levels to keep you entertained. It has pretty graphics, and while it could use different music and maybe a story mode for more variety, it’s worth downloading to check out if you enjoy the genre. Pros Cons