Unleash the power of Magic Talismans in this Mythical Adventure. Match legendary gems to help the Divine Oracle in her relentless search for the lost jewels.

Lost Jewels is a Match-3 Puzzle that works by touching and switching gems witht he next one up, down, left or right. The difference it has with most games in the genre, is that colored gems don’t need to be aligned to make them disappear, they just need to be close to each other so the match is made. Also, the objective here is not to make points, and you don’t get a rank according to a score, your mission can be to destroy blocks by making matches next to them or over them, and to make treasure chests fall to the bottom of the grid by getting rid of the gems below them. 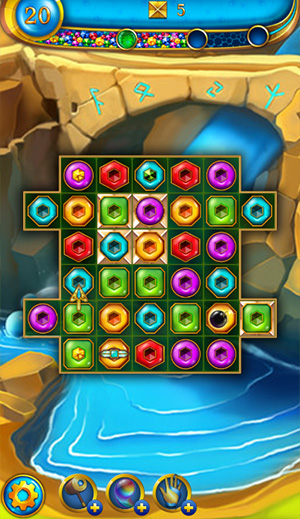 On the upper part of the screen, you’ll see a bar where the gems you match get collected. You get a rank at the end depending on how many gems you disappear. You have a limited amount of moves you can make, and when you complete your stage objective, the remaining moves will become extra jewels on your gem bar. Depending on the number and position of the magic gems when the match is made, you can get a special jewel. If you align 4 vertically or horizontally, you get a straight ray that destoys a row or column. If you align 4 in another shape, you get a thunder jewel, which destoys gems of the same color of the one you swich it with. If you align 5 gems in a way that the match has 3 vertical and 3 horizontal ones, you get a destroyer jewel, which makes disappear a whole row and column. There are also boosters and special items you get while leveling up after beating stages. Like a hand that let’s you destoy any gem you want, a hammer to destoy rock block easily, or a gem bomb that explodes when matched, affecting the gems close to it. If you fail a level, you can buy extra turns, and at the beginning of each level you can choose up to 4 booster items to aid you in your mission.

Lost Jewels features a 2D art style that has a realistic approach. Characters have a 50’s movie poster style, like if they took a model and made her into a drawing with life like proportions, which is called rotoscoping in animation. The world map also goes for a realistic look, but with added fantasy elements for a unique design. 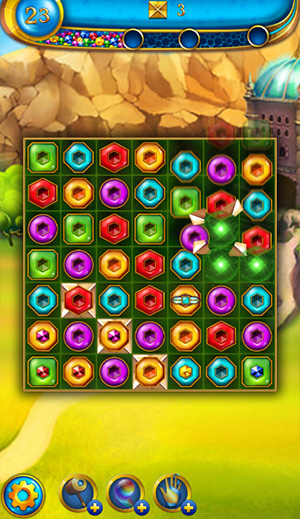 Once you play on the stages, you’ll see a simplistic dark grid with gems over it. It doesn’t look as eye catchy as other games in the genre, but the magic effects look quite nice like lighting and fire and sparkles when they disappear. But most of the time, there’s not much animation going on, and also the background is not animated, and it appears to have less overall quality and a more cartoony look than character portraits. The visual experience here is on the level you’d expect on a game of this kind, but it is not memorable at all, in the way that there are many mediocre games with a similar look, and it sure doesn’t stand out. Graphics here get the job done, and that’s about it.

Lost Jewels feature hundreds of levels, and the main objective has a couple of variants to keep things a little fresh, that and the way you don’t need to align gems to match them adds a little originality, but that gets old fast if you’ve played enough puzzles. 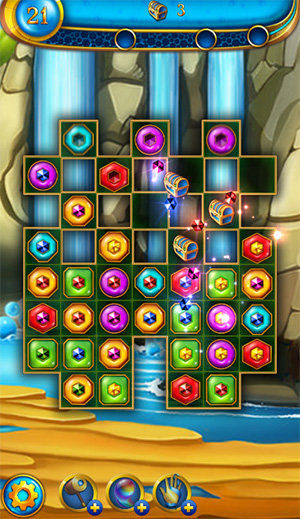 It is certainly entertaining, and if you’re looking for a casual match-3 game, it’s a nice option. But there’s nothing that will keep you going for more than half an hour at most, since it lacks something that really makes it stand out from the mayority of the puzzles you can download in your mobile device. It’s the kind of game that you play when you’re bored, but if you have anything else to do, you won’t take a second look at it. It should be said that the setting changes every 10 levels, and there are many magic effects to see, but since the gameplay gets repetitive pretty fast, pretty effects and drawings won’t really keep you playing any minute longer.

Lost Jewels is free to download in the Apple App Store and Google Play, but there are in-app transactions and the prices may seem a little expensive for a few extra lives or a special item. They have discounts regularly and the game shows you banners about it every few stages, which can get a little annoying.

Lost Jewels is a simple to play casual Match-3 game with some pretty visual effects that should entertain fans of the genre for a little while, and that’s about it. For a seasoned puzzle player, it doesn’t really offer something truly original and it doesn’t has a “hook” to keep gamers going at it for more than half an hour. Download it if you’re bored and have nothing better to play, since it may at least entertained you for a dozen levels. Pros Cons