Help Bloo Kid to rescue his girlfriend from the hands of Evil in this fancy retro-style “one-screen” platformer. Jump and run your way through 84 action-packed levels spread across SEVEN unique worlds.

Bloo Kid is a one-screen platformer where you control a hero that most recue his girlfriend from an evil wizard. To do so, you must defeat all enemies in each stage by jumping on them. 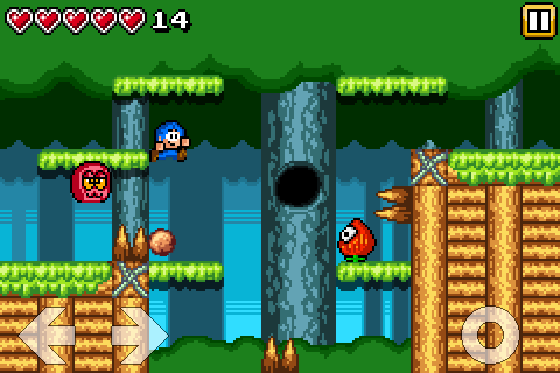 You move around Bloo Kid by pressing the arrows on the bottom left part of the screen, and you jump with the “O” button in the lower right corner. The longer you keep pressing, the higher you’ll jump, so you can just tap for a short leap, or hold to reach far way and high up places. When you start a level, enemies will start appearing in waves, and you’ll have limited time to jump on them to defeat them. Once you get rid of a wave, you’ll get more time and new monsters will appear in the stage. Once you eliminate them all, a Golden Star will appear on some spot of the stage, and you’ll have a few seconds to collect it. You get one Star for the Level Rank just for beating it, another one collecting the star item at the end, and the third one by winning without taking any damage. You have 5 hearts which allow you to take 5 hits before dying, and there aren’t any items to regain your health back, so be careful. At the beginning, enemies will be just green blobs moving around slowly, but later there will be monsters that can jump, run and shoot or throw projectiles at you. Also, there will be traps in the levels such as spikes or lava. Everything will start pretty easy, and you’ll even wonder why would the game give you 5 hearts if you don’t even need a health bar, but just wait for the real challenge to come… At the end of every world, there’s a boss fight, and you’ll have to jump on it several times to slay it, but each time you manage to damage the big monster, it’ll become transparent and invulnerable for a few seconds, but still being able to attack you, so be patient.

Bloo Kid features 16-Bit pixel art. It looks like an early Sega Genesis or Super Nintendo game, with simple animation and few colors being used for the backgrounds, which aren’t very detailed, but you can make out what everything is supposed to be. 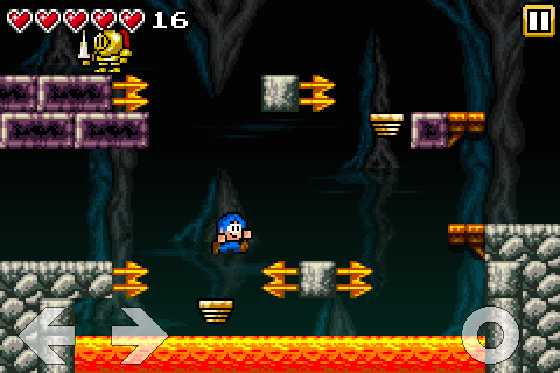 Since the game has low resolution and there isn’t scrolling, it becomes a little boring to look at after a while; some games try to mimic the look of the GameBoy and Consoles from around 1990, but they have more moving elements and add a few modern special effects to make it more appealing to players of today. Bloo Kid may only appeal to retro gamers, and even they may think that it could have better visuals. At least there are many settings for the levels and types of enemies according to where you are.

Bloo Kids features 84 levels across 7 different worlds, so there’s enough variety in what you’ll see, and while it all starts out very easy, by level 8 you may lose all your 5 hearts in a stage, and after advancing some more, you may have to try several times to beat a level. 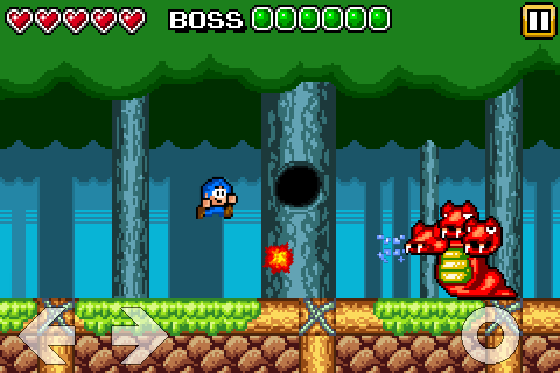 Each stage has a unique design, and there will be moving platforms and other dangers besides the enemies. Sometimes you’ll find yourself trapped between blocks or have to wait for the right time to jump at an enemy walking inside a tunner or something, with just a gap to jump on and land on the monsters with perfect timing. The music and sound effects are OK, but the lack of scrolling and not collecting items for score in a platformer makes for a not so enjoyable experience. There aren’t any achievements or power ups, and just jumping on enemies gets pretty repetitive soon. Even Mario could shoot fireballs or use a hammer first adventures.

Bloo Kid is free on Google Play and the Apple App Store. You’ll see a video ad after losing some times, just like every other game of this type. You can buy the ad-free version if you really enjoy the experience and want to finish all the 84 levels without interruptions, but at the same price there are games that are better in every single aspect, so try it out for a while before making the purchase.

Bloo Kid is a simple game based on the single screen a platformers of the early 16-Bit era, but just jumping around and defeating monster by landing on them becomes boring fast. You could play Snow Bros which has bigger levels, power ups, tons of items to collect and much more content. Bloo Kid, feels pretty average, and while it’s meant to be played by old school games, even they may find it too simple; but it’s still an OK free option to pass the time, so consider checking it out if you’re feeling “Retro” today. Pros Cons