by: Smart Games 4U

Juicy Dash by Smart Games 4U is a casual match-3 puzzle game with great visuals and simple gameplay that you can just pick up and play round after round. Take a good look at the grid, combine the fruits into smoothies and create cascades for a great score.

Juicy Dash is your typical match-3 puzzle game with a switching mechanic. You touch the fruit you want to move, and move your finger left, right, up or down, and it will change places with the fruit that’s in the space. If not match is made, they will reset places. If 3 or more fruits are lined up togeter vertically or horizontally, they will disappear, and new ones will fall to the grid from above to take their place. 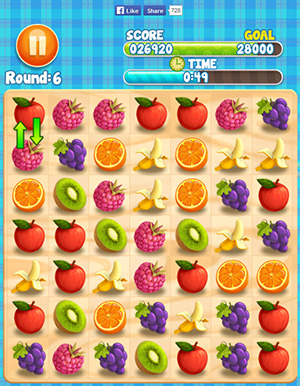 The game is divided by rounds, each one has a Score Goal you have to get within the Time Limit, if you fail you have to start all over again. If you make a 4 Match, a smoothie will appear, and when you switch it, it will make a whole row or column disappear. Also, if you manage to make a 5 Match, a Clock icon will be made, which adds 15 extra seconds in your round’s time. The way to get lots of points, is by creating “cascades”. When you make a match, and the fruits fall down, if a new match is made, then a Combo will start. Them ore Matches in a Row you make, the more points you’ll get per fruit disappearing. In a regular match, you get 40 points per fruit, in the 2nd one, you get 60 points, in the 3rd match of a Combo, you get 80, and so on. As you go on in the game, a new fruit icon will appear (banana) and a nut, which can not be matched, but you can get rid of it by making it fall down to the last row. You can also destroy a nut by using a smoothie explosion its row or column.

Juicy Dash features a hand-drawn style that seems to be inspired by tradicional paintings you often see hanged on the walls of kitchens and restaurants. They have a sort of realistic look, with proper lighting and composition, but using vivid bright colors, it’s certainly an art technique not often seen in casual mobile games. 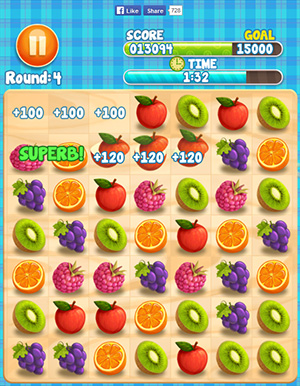 You won’t see much animation in the fruits, but that’s not really something to complain about. They bounce nicely when falling down, the disappearing effect is nice and simple, and the Points and Cheerful words that appear when making Combos. like “Superb!” adn “Awesome” are nicely animated. The grid has a wooden texture, and the fruits cast shadows on it. The rest of the screen shows a soft blue squared pattern, common for a tablecloth. The bars that show you the score and time look quite nice, and the text, while not mindblowing in its design, and just works and fits the game perfectly.

Juicy Dash is a nice looking easy to play Match-3 Puzzle, and while it’s a good entertainment for a while, that’s about it. It doesn’t add anything to the gameplay formula, it doesn’t try to innovate in anyway, it features the same setting and background music, and it doesn’t have anything to mix up the Rounds like items, obstacles in the grid, characters, a world map or different settings to change the playfield. 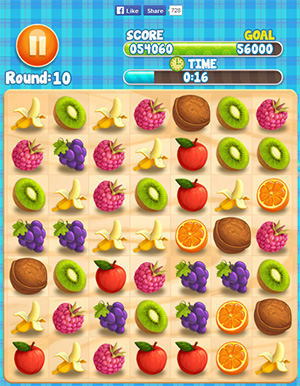 The only thing that stands out of this title, is the visual style. Everything else is just plain average. It’ll be fun for a few minutes, maybe you’ll try another playthrough the first time you lose, and that will be it. It doesn’t offer anything else to get you going for a 3rd play, like achievements or power ups or something to unlock and keep you going. Breaking your previous Score Record, isn’t that much of a motivation to keep playing.

Juicy Dash is free to play on the Apple App Store, and while you’ll see some advertisement, it doesn’t interfere with the game experience at all, and you can completely enjoy the gameplay experience without spending a dime.

Juicy Dash is just your average free Match-3 mobile game. While it does look better than many games of the same genre, it doesn’t really stand out gameplay wise, but it’s still a nice choice if you’re bored and looking for a little game to spend a few minutes. Check it out if you’re a fan of this kind of puzzles. Pros Cons