Beat Stomper is an action arcade game, simple one – button control with endless fun! Jump, Hold, Stomp. It is born for you, and you are born for it 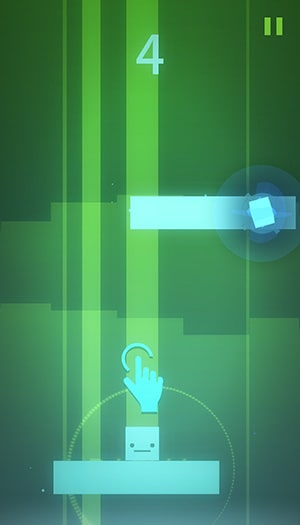 You’ll always see 2 platforms in the screen. The one you’re standing on at the bottom, and one moving to the sides above you. In order to jump, just tap anywhere on the screen, and once you’re in the air, tap on the screen again to make a stomp, and fall down quickly. If you miss the platform and fall down and hit the starting place, you can try again, if you don’t land on anything and fall at the bottom of the screen, game over. When you jump, you can touch the screen and keep your finger on it, in order to slow down time and calculate the best time to perform the stomp. This doesn’t late more than 2 or 3 seconds, so use it wisely, and try to jump one you think it’s the best time to be just in the center of the moving platform. The tiny square dude can bounce on the lest and right borders of the screen, but it’ll land and stick to the platforms even if it falls right on their edge. Also, some platforms have a shiny cube that gives you a boost, and sends you flying up 20 platforms, but you need to land right on it in order to activate it. Every 4 playthroughs, you’ll get “Big Body Mode”, and square dude will become twice as big, making it a little easier to land on the platforms. As you go up, the platforms you jump on will start getting smaller and move to the sides faster and faster, so it becomes increasingly more difficult.

Beat Stomper uses mostly geometric figures bouncing around with a neon light visual style, with colors changing as you advance from violet glow, to blue-green hues to black and white. 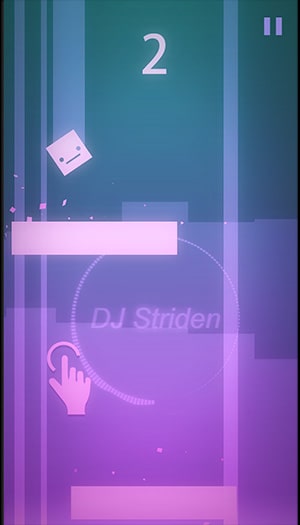 In the first level you’ll see mostly rectangles in the background moving up and down like a volume meter in a DJ Mixer. At Level 2 you’ll see rotating triangles and other shapes rotating in the back, and when you get a 20 platforms boost, you’ll see a very cool looking speed effect applied as you advance at blazing speeds to the top. It’s worth mentioning that the “Matrix Movie” effect for when you wait a little bit before stomping has a “negative photo” filter applied to the whole screen, and the animation of every element slows downs and then resumes at normal speed in a very smooth way. While you don’t see very complex elements in the screen, the explosions, use of glow, neon color and everything else is like “watching” music, to it is a great experience only found on a rhythm game.

Best Stomper features 9 songs, and you don’t need to pay anything to unlock them, you can listen to them just by playing and meeting the requirements for new levels. 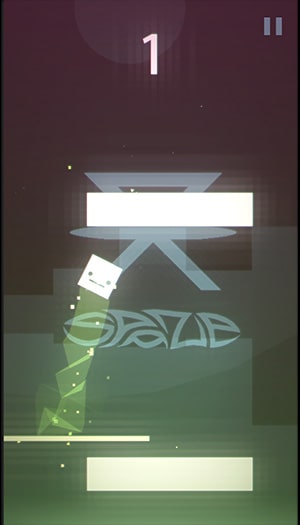 The gameplay stays the same, but the way the background changes to visually show you the mood of the track is praiseworthy. It may remind you of Geometry Dash in a way, since everything moves to the beat. There aren’t much challenges besides the main “jump. stomp. repeat” basic objective, but it can be quite addictive to try and reach just one more platform. It would’ve been nice to change the square look just a little bit, like similar games do, but overall the “record breaking” arcade style works great given how well done the music fits into the overall experience of playing.

Best Stomper is free on Google Play, with video ads showing after a few game over screens, and it costs $1.99 in the Apple App Store. You should definetely check out the free Android version before purchasing the iOS version, since there are similar games available for iPad and iPhone for 1 dollar or less, and not everyone will buy a game just for the music alone.

Beat Stomper wouldn’t be such a successful game (5 Million downloads) if it wasn’t for the way it makes you feel like in a great Night Club with an awesome DJ. The gameplay in itself certainly isn’t enough to keep you going for a long time, but this is a simple tap title that makes the graphics and soundtrack get your attention in a very nice rhythm package. Check out the free version, if you really love it, consider spending two bucks on the premium app. Pros Cons