Monsters Busters is a great looking 2D Puzzle Game featuring addictive gameplay in hundreds of levels. Enter the Puzzle Tower and eliminate all the colorful monsters in each floor, and be careful with the Boss battles and Hero Missions.

Monster Busters is a Puzzle based on the gameplay formula of the classic “Tetris Attack”. You have a grid filled with monsters of different colors, each representing an element such as fire, water, wind and thunder. To match them, you touch a monster, and move it up, down, left or right, so it takes the place of the monster in that space; if 3 or more of the same type align, they’ll disappear and you’ll earn points. 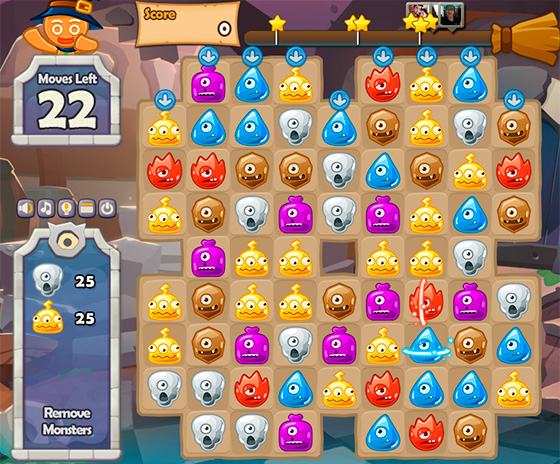 Everytime you make a match, monsters above the now empty line will fall to take its place. If when this happens there’s a new match made, you’ll perform a Combo, and boost up your score. Also, if you make a 4-Match, you’ll create a ‘bomb’, which is a special monster that will explode vertically or to the sides, eliminating a whole row or column. If you manage to make a 5-Match, you’ll create a Magic Hammer, that when used, gets rid of all monsters of one color in the grid. Some elements create a circular ‘bomb’, which destroys all monsters in a 3 spaces ratio. In the game’s story, you’re in a tower fighting enemies, and every floor has 2 or 3 rooms. After beating a floor, you get a Treasure like Monster Bombs, Extra Turns or some other upgrades. Every 6 levels there’s a Boss Fight, that takes damage when you make a Match just next to it, and if you have good performance, you get Special Hero Missions to earn more points and items.

Monsters Busters features great 2D art and animation. Everything is colorfull and the special lighting and fading effects when the monsters disappear and bombs explode look pretty good. Also the Story and Tutorials are nice to look at, and highlight where to go next and what to do with glowing effects so you’ll know what your next action should be. 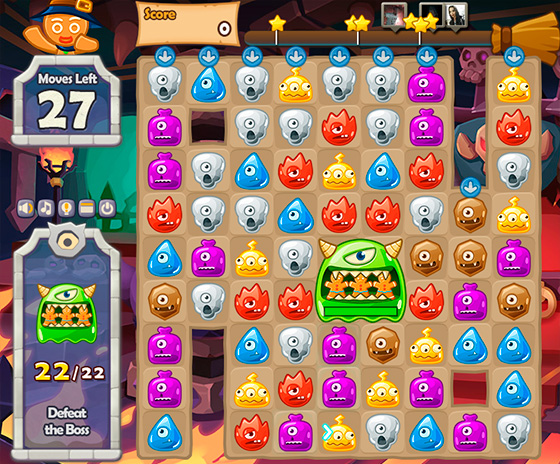 If after a few seconds you haven’t made a move, a Special Animation in the grid will show you what move you could make. It’s also worth mentioning that one you touch a monster, it will start moving around and making poses depending on its element. Also, the bomb effect depends on the element, like the wind created a tornado, or the water created an ocean wave. Finally, the bosses are pretty big and talk to you saying “Ouch” or “You won’t beat me” using comic dialog bubbles. They take noticeable damage, for example, the first green blob boss takes a redish color, and you can break it’s horns and teeth. Overall Monster Busters is an excellent looking 2D puzzle, and has nothing to envy the most popular games of its kind.

While Monster Buster doesn’t really innovate the genre, since there are many similar free mobile games with the same gameplay mechanics, it stand out form the rest with it’s great graphics and animation, sound effects, music, treasures to collect, boss fight and variety in missions. 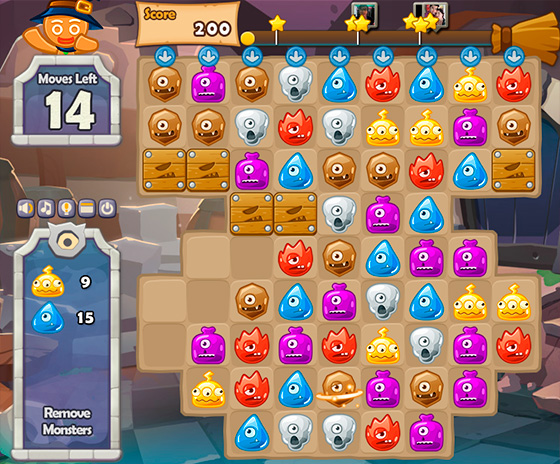 To make things interesting, in some levels you just need to reach a certain score withing a certain amount of moves. Other times you need to remove a certain number of a specific kind of monster, like eliminating 20 thunder and 20 water types. And there’s a Special Mission that has Frozen Spaces, and you need to free them by making matches on them. The RPG element in the game, is the way you earn items by winning a level with 1, 2 or 3 Stars. There’s a score bar on top of the grid telling you how many points to get for a 3 Star Rating, so even if a level can be beaten by anyone, veteran puzzle players have an extra challenge, or you can go back and try getting a higher rating in a level, increasing the game’s replay value.

Monster Busters is free to play on iOS, Android, and there’s even a web browser version on Facebook that you can play on PC. But even the in-apps transactions are kind of expensive. You can get a package of bomb monsters, magic hammers or some extra items for a dollar or so, and can be only used once on a level, which may seem like a little to much. Also, when you lose you can try again or buy 5 extra moves for 99 cents, that can seem expensive for most players.

Monster Busters is a great choice for any puzzle fan. Nice colorful 2D Animation, addictive gameplay and variety of missions will keep you going for quite a while. So invite your friends over, you’ll get a few items to keep on going fighting the monsters in the tower. Pros Cons