Beat Rush is your new addiction! With this brand new beat-based action platform game, you will challenge your skills and see what you’re capable of. The gameplay is as simple as one touch jumps and hops. You just need to rush forward in tune with the amazing beats the game offers.

Beat Rush is a rhythm based action platformer where you have to avoid spikes, lava, circular cutting saws and other dangerous traps while collecting golden coins by jumping to the beat. 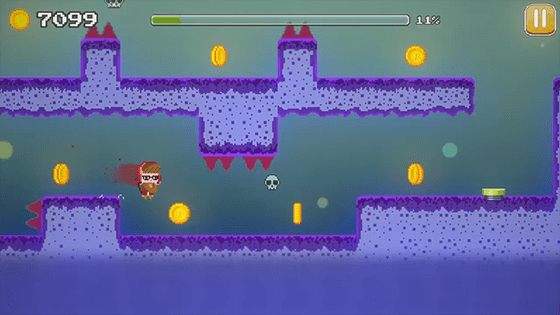 When the game starts, touch the screen to start running, and you’re chaarcter will never stop and just rush forward. You only need to tap anywhere on the screen in order to jump, but sometimes you’ll find trampolines that will send you about twice as high as your normal hop, and also a JetPack that will make you fly through the level. To control its flight, touch the screen to go up, and let go in order to descend. Besides the common traps that kill on touch, there are trampolines that you should not take, that will send you to spikes on the ceiling, and also big “up” arrows on a neon column that change gravity, and make your avatar fall upwards and run upside down until you pass another neon column with a “down” arrow. There are alternative paths to take in a level, that may have different difficulty and more or less coins to collect. With them you can unlock new characters in the store, or exchange them to use the latest checkpoint you activated when you lose. The levels are long, but there are green flags scattered along the platforms that let you continue your adventure when you die, but you have to pay a certain amount of coins, and the farther a flag is from the beginning, the more expensive it’ll be to continue from there.

Beat Rush features a colorful 8-Bit pixel art style that seems to look for a dance floor visual style. The avatars look square-ish, but you can see that they’re pretty detailed for their low resolution, and you can make out they’re accesories like headphones, glasses, necklaces, earrings and such. 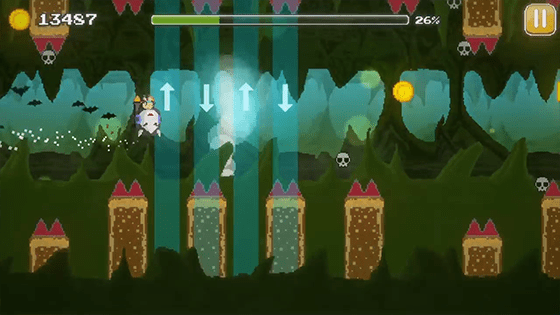 The backgrounds look OK, a little too monimalistic, since elements in the stage aren’t very detailed, but you have no problem distinguishing what kills you. To make it even more obvious, you see a warning in the form of a skull icon before a trap, so you know when you must jump. The platforms where you move around have good lighting, but the layers at the back look dark, and get blurry as they go deeper. There’s also a black front layer to better give you the impression that you’re underground. Most character leave a trail of transparent light or sparkles to show off their movement, and some have other unique stuff around them, like a frog that has flies following it, or an archer girl that’s leaving arrows floating behind.

You can tell that Beat Rush is pretty much a clone of Geometry Rush, and it doesn’t really try to do things differently. But the main aspect of the popular minimalistic rhythm platformer, is actually jumping to the beat, and that’s something that just does not feel very well done here, the music is rarely in sync with the platforming, and you have to actually see ahead to plan your jumps, not only follow the music to “feel” when to tap. 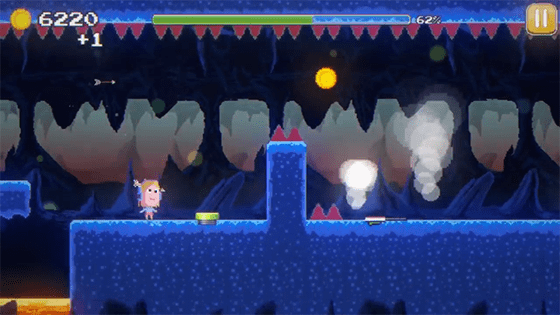 The music is just OK, not really very catchy, and you’ll probably won’t like to listen to it outside of the game. It is not the kind of memorable tune that gets stuck into your head and you’d download for $0.99 on iTunes. The challenge is pretty good, but since the level design doesn’t seem to have been made with an actual rhythm in mind, it’s way more difficult than Geometry Dash, since the music doesn’t give you a hint on when to jump; and probably that’s why they added the skull icons to warn you about the upcomming trap. What this game has going for it, are the pop culture references in the unlockable characters. Some of them are actually pretty well designed and you may be playing again and again in order to buy another one.

Value for your Money 87%

Beat Rush is free on Google Play and the Apple App Store. You can choose to watch a video ad to activate a checkpoint when you lose, and given the fast-paced gameplay, that can happen  quite often. You can also buy golden coins through in-game transactions for continues and extra avatars, but if you’re a good player, it doesn’t seem like it will take too long to unlock more characters, in comparison with similar games.

Beat Rush is a good choice if you’re looking for a fast and extremely challenging platformer. Overall, it does have better graphics than the game its based on, but the music, which should be more important in this kind of games, is not better, and when you play, it just does not feel like the jumps are in sync with the rhythm, which is whay made the most popular title in the genre a great title. Check it out if you enjoy runners with night club music. Pros Cons