Soapland is full of a mysterious foam but nobody knows why. Enter this adventure puzzle, slide soaps and unveil the secrets as you remove the foam on your way. Will you be a soap star and save the day?

Scrubby Dubby Saga is a Match-3 Puzzle where you line up colorful figures, but instead of touching and dragging one single figure, you move a whole row or column to the sides. 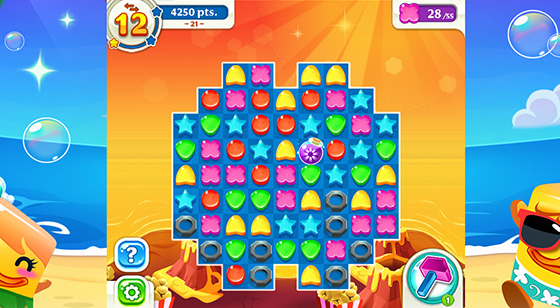 Depending on the level, there are different objectives. You start out collecting a specific type of figure by lining them up. Then the grid will be covered in soap and you have to clear the spaces by making matches on them, and later there will be obstacles on the grid such as metal rings and blocks you must eliminate by disappearing figures next to them. The metal rings move along with the whole row or column, the blocks stay in their place while you’re dragging the figures, and there’s another special obstacle, a steel cross over a figure, that doesn’t let the whole row or column move. To get rid of it, you need to use the trapped figure in a match, and then that figure will become free and you’ll be able to use it in a match. When you make a 4 match, you create a magic formula that explodes vertically or horizontally, and you don’t need to match it, just tap on it twice to activate it. If you manage to make a 5 match, you create a bomb formula, which takes out the figures surrounding it. When you put two formulas next to each other, you combine it creating a more powerful one. To create an X-Bomb, put one vertical or horizontal formula next to another one. If you combine a bomb booster with a row or column formula, you’ll create a special Triple Bomb, that explodes affecting 3 rows or columns. Besides the bomb formulas, you also have a tiny hammer that can take out the figure in the space of your choice, anywhere on the grid. Just select it and then tap wherever you want. You must finish collecting figures or clearing obstacles before you run out of moves, and you’ll get a 1-3 Star Rank depending on your score at the end.

Scrubby Dubby Saga features a nice and colorful 2D hand-drawn art style. You can notice shining and shadows on the figures, and when they disappear they leave behind a trail of bubbles, which looks really well animated. 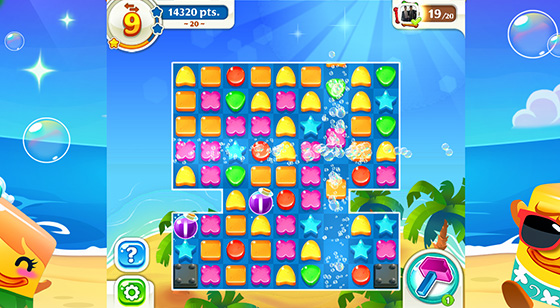 The background is static, but it has a nice design with many gradient colors, and it isn’t blurred out like in other games. The grid is just a light blue/dark blue checkers board, nothing too fancy, but once you start draggins around the rows and columns and making matches, you’ll see pretty light effects and all the figures move very smoothly.

Scrubby Dubby Saga tries a different approach to the classic Match-3 formula, and while it starts out in a unique way when you’re learning how to play, after a while it doesn’t feel much different than the average puzzle you can find available for mobile devices. 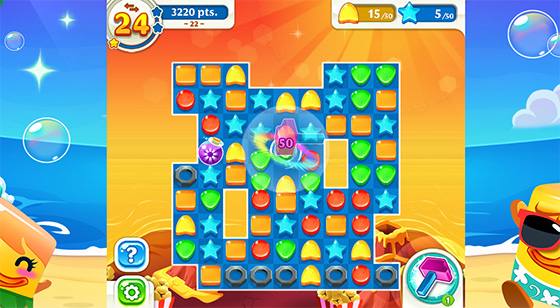 Gameplay wise, at first you may think it’s a pretty original puzzle, but besides moving whole lines instead of just one figure, it doesn’t really have anything you haven’t seen before. It lacks a story, there are very few boosters to use, the backgrounds don’t have characters and seeing only objects moving around makes it feel a little “lifeless”. It’s a good game, but after 20 levels, it becomes repetitive, only big fans of the genre may want to keep playing.

Scrubby Dubby Saga is free on Google Play and the Apple App Store. You won’t see any advertising so you can enjoy the full experience, and it really isn’t a very hard game, so you won’t need to spend real money to buy items or turns in order to beat later levels. It’s a nice casual game you can try out right now.

Scrubby Dubby Saga is a nice choice if you’re a casual player looking for a puzzle, but don’t want the same old common gameplay of just moving around one figure up, down, left or right… While it’s a good game, it’s not really excellent, everything just works out and it’s an OK experience to pass time, but nothing really makes it stand out among the sea of puzzles you can try out for free. There are many more popular games of the genre which are more addictive and have way more content to offer, but if you want to try out the whole moving around whole rows or columns gameplay, download it now, it won’t cost you. Pros Cons