Ninja Up! is an addictive pixel-art infinite jumper that will keep you busy avoiding helicopter enemies and UFOs trying to reach the highest point possible.

Ninja Up! is an infinite jumper, which means that your objective is to reach the highest point you can. You do this by drawing a line in the screen with your finger, creating a rope for the ninja to fall on to. Depending on the lenght of the rope, the ninja will jump really high (short rope) or just a little bit (long rope). The angle of the line and the place where the ninja lands also affects the direction of the jump. The ninja can bounce around the side edges of the screen, and every time you tap the screen, the previous rope disappears and a new one begins drawing. You lose if the ninja gets to the bottom of the screen or if he crashes into an obstacle. 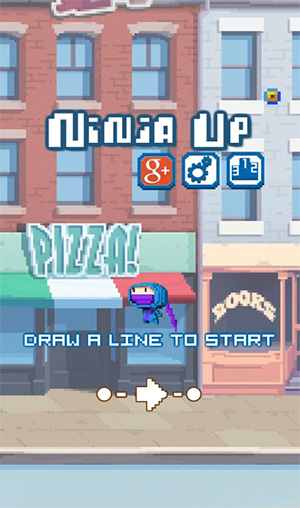 Enemies appear about a hundred meters in the air. They’re helicopter ninjas you should avoid. Just hitting them won’t make you lose, but if you touch the propeller, you’re done for. If you hit an enemy, you’ll lose momentum and start to fall quickly, but drawing a line at the last moment can save your life. Overall the gameplay of Ninja Up! a simple concept, but it’s very addicting. Is not easy reaching 200 meters, and you’ll be coming back to get even higher no matter how many times you try again and again.

Beatiful pixel art, with nice animation, detailed backgrounds and nice effects added when jumping, crashing and bouncing around the screen. The characters appear to me made in 3D out of voxels (cubes) but converted into a 2D sprite for an overall classic 16-Bit look. 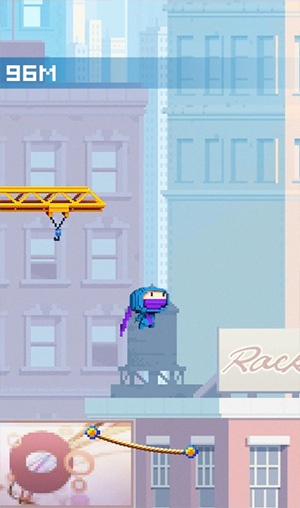 The ninja has many facial expressions and moves depending on what he’s doing. If you have many straight high jumps in a row, he’ll start gaining momentum, and a special effect like breaking the sound barrier will appear. Next he’ll start spinning and the screen will get a set of animated lines to give the ilusion of high speed, action japanese cartoon style.

Ninja Up looks kind of simple at first glance, but it’s a lot deeper than it seems at first. The graphic style is made up of great looking pixel art, the voice and sound effects really add to the overall experience, and the gameplay mechanics work just great. The music is your typical old fashioned japanese tune, like the ones you commonly hear on classic Martial Arts Films. It’s the only song in the game, but it doesn’t get annoying. 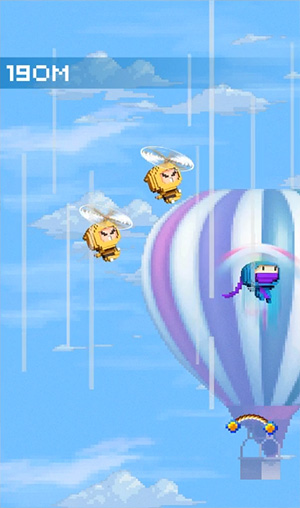 The background keeps changing no matter how high you are. Buldings, flying balloons, clouds, the stratosphere, UFOs in space… Theres a very detailed scenery for you to watch. Also, there are achievements to get. Every time you play stuff changes places, and even after getting to 500 meters, the addictive gameplay will make you coming back to reach an even higher record. Ninja Up also has a nice sense of humor. Everytime you lose, a text appear telling you the reason of your fall, it’s always something funny.

Ninja Up is free. Download it right now, you’ll have a blast. There’s a little non-intrusive ad shown about every 5 tries, but given the overall quality of the game, is not something to complain about. Also, there aren’t any in-app purshases and you can get a Super Jump at the start of the level just by inviting your friends to try the game.

Ninja Up! is one of the best free Infinite Jumpers the App Store has to offer. Is not the kind of game you’ll be playing for hours, but its addictive gameplay, beautiful classic game graphics and nice music will keep you trying again and again until you reach hundreds of meters high (which is not easy at all) Pros Cons