One Tap Hero by Coconut Island is an adventure with simple control, but complex gaming mechanics once you get into it. So be ready to help the white hero saved his girlfriend turned bear from the evil wizard.

One Tap Hero is a platformer where you take control of a white cartoon dude that walks automatically, and you conly interact with him by making “One Taps”, hence the name. When you tap the screen, the hero will jump, but if you keep your finger on the screen, the jump will be higher. There are red arrows that tell you where you should tap, and “?” balloons that give you tips. Also, there are walls marked with a green arrow, that change the direction the hero is walking to. 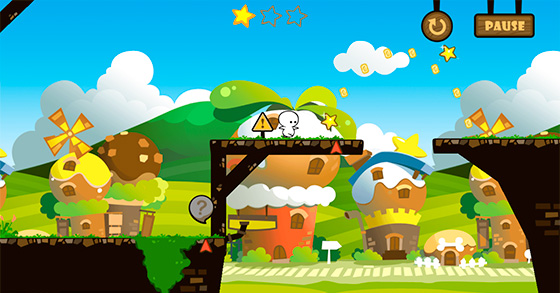 The story says that an evil wizard turned the hero’s girlfriend into a bear, so in each level, the objective is to get to her. But for an extra challenge, you can collect coins to unlock costumes, stars for more completion percentage, and some levels have a big golden key you can grab to open secrets levels in every world. Besides jumping, sometimes the hero will pass close to objects he can interact with, such as levers that open gates, or stairs, a comic balloon will appear over his head, and when you tap, he’ll interact with the object. Finally, there are trampolines to make giant leaps, and even portals to teleport, you enter a purple one, and come out of a green one. As far as One Tap Platformers go, this game offers well tought levels based around thinking a proper strategy to collect everything and beat the level, and is not based on reactions or perfect timing. But if you still find a level to hard, there’s a “3 Star Item” you can get so you can skip levels with perfect score.

One Tap Hero features 2D animation similar to Web Flash games. The character looks kinda plain, but it’s nicely animated, and elements in the front layer, such as coins, don’t have complex design or color grading, but move around nicely and give the impresion of a living cartoon world. 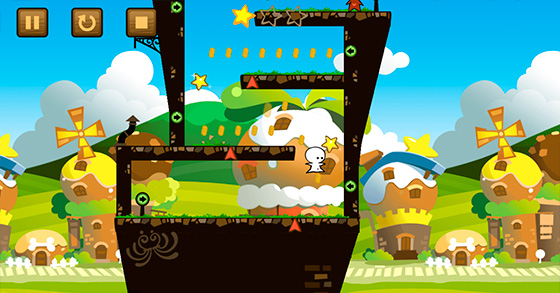 The background layer looks more eye catchy, with colorful houses, montains and clouds featuring smooth light/shadow effects, and even moving elements such as rotating windmills. It’s also worth mentioning that the story is shown via a visual novel, and looks like a children comic, with everyting told by drawings and not relying on text.

There are many mobile games where the player’s interaction is just tapping once here and there, mostly to perform only a single action, but One Tap Hero has such a simple control on a ‘more complex than it seems’ gameplay. The maps are well planned so you don’t get bored, having to plan and act at the right time, with so much tapping to do to interact with the enviroment. 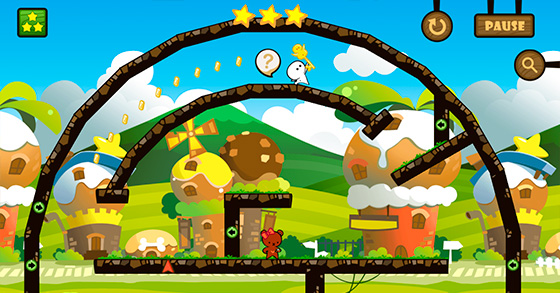 It isn’t as had to reach the end of each level, but for hardcore gamers, coins, stars and golden keys are there for the extra challenge, and with 4 Worlds with 20 regular levels and 5 unlockable ones, you’ll be entertained for quite a while.

One Tap Hero is free to download and enjoy on Google Play. You’ll see a small ad banner in the lower left corner of the screen at all times, but it will not get in your way when playing, and if you’re playing on a tablet, you won’t even notice that is there.

One Tap Hero is one of the best automatic runners/platformers out there. Even if it starts out with only jumping as the only interaction, it becomes more like an adventure game and you find out how challenging it can get if you plan to beat each level 100%. Many levels to play and unlockables will keep you entertained for a while, so check it out if you enjoy sidescrollers. Pros Cons