QBert Rebooted by Sideline Amusements is the classic 80’s Arcade Hit brought back in its original form, and in a new modern look adapted for touch controls. Its puzzle gameplay mechanics are adapted in a nice way for today’s mobile devices, so check out what made this title a popular Coin-Op over 30 years ago.

Qbert is a classic Arcade game brought to modern mobile devices. The objective of the game is to move the yellow/orange round character ‘Q*Bert’ to all the platforms on the level. In the original game, you had a joystick and jumped around by tilting to the desired direction, but here, you tap with your finger on the platform you wish to land. 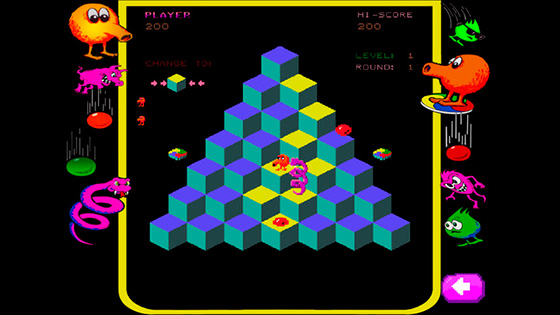 You can collect crystals for points that are on some platforms, and the faster you beat a level, the higher your score. Still, you have a time limite, so you should hurry up. There are enemies on the levels you should avoid. The most common one is a purple snake that jumps around just like Q*Bert, if you touch it you lose a life. Q*Bert can’t attack, but there’s a special rainbow colored platform you can use at the edge of the level. When you jump on it, it will take you to the top platform of the stage, if a snake was following you, it will jump to the platform after you, just to fall to the void when you’re traveling upwards. You can choose to play the classic game, or QBert Rebooted, which features 3D graphics based on the characters appereance on the recent movie ‘Pixels’. While the gameplay stays the same, here the platforms have a hexagonal shape, so you can jump around in more directions. Also, the platforms are quite bigger than the cubes on the original game, so you won’t have any trouble tapping on them. On the classic game, you may touch 2 platforms at once by mistake, even while playing on an iPad.

The original game features classic 8-Bit pixel art. The background is black, characters have little animation, and the stage is made up of cubes that change color when you land of them. Overall it has very few colors, and while it was an OK visual style at the time of its release, nowadays is not very appealing, unless you’re a Retro Game enthusiast. 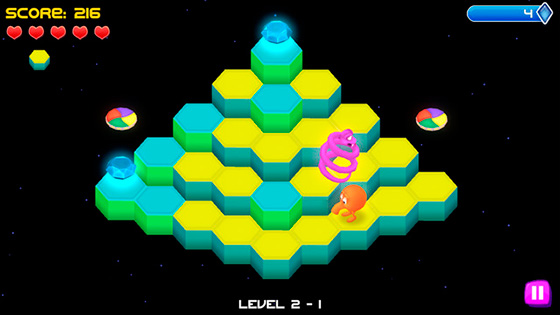 The rebooted 3D graphics have a very smooth cartoony look. The characters are nicely animated, with Q*Bert and the enemies bouncing around when they jump, and the platforms moving a little bit when they change color and characters land on them. Also, the background has a night ski look with  shining stars moving from the center of the screen to the sides. It’s much more colorful and appealing for players nowadays, but it does keep the overall visual look of the original game.

Here you have two games at once. You get to experience the classic Q*Bert game, with the only change being the control scheme, and you can also try the reboot, which is the Q*Bert formula with improvements for a better overall experience for modern users. 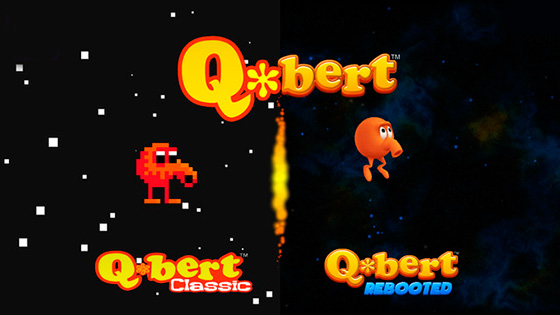 The Rebooted version, besides the improved graphics, has more levels and the touch screen works way better on the bigger platforms it has. As Extra Content, you can buy new costumes for Q*Bert, like the ‘cubic’ look it has on the movie Pixels, a Halloween theme, or versions wearing many different funny hats. It’s a small detail, but welcomed for thsoe that like collecting content.

QBert Rebooted is free to download on the App Store. As usual with these games, you’ll see a 30 seconds video ad after each level, and you can also buy costumes and app-free version with in App-Transactions. It’s a good game, but most players will just try it out for about half an hour. If you enjoy it for a few hours, consider supporting the developers.

QBert Rebooted brings back the classic 80’s Arcade game in it’s original form, perfect for Retro Gamers, but the ‘rebooted’ 3D version is adapted perfectly for mobile devices and nowadays players. The overall gameplay formula is timeless, still fun today, so try it out now on your tablet. Pros Cons