Boom Dots it’s an eddictive One-Tap Arcade style game that will test your reflexes to the Max in your way to the High Score.

The objective of the game is to tap on the screen in order to launch the dot in the bottom of the screen, and hit the big dot moving side to side in the center. The target doesn’t move at the same speed in every turn. Some games have increasing speed, but here, it’s just random. So it’s not a good idea to tap just at the beginning of every turn, sometimes the target will be moving really quick, and the next move will be abrely moving at all. You don’t have all time in the world. At the bottom of the screen. there’s a floor with spikes that’s getting closer and closer. If you take too much time to make your shot, game over. Also, there are spikes in the top of the screen, so if you miss your target, bye bye dot. 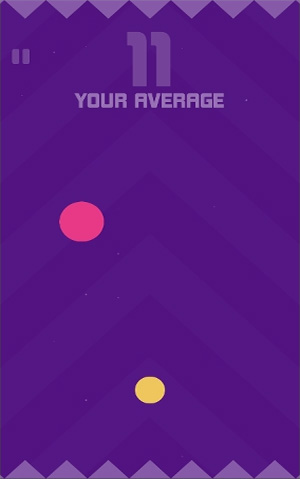 You get 1 point for every dot you hit, but you can get more points if you hit them right in the center. If in your first move you manage to hit the target right on the middle, you get 5 points. If you take a little longer to get a bullseye, you get 3. The game is an endless level and you’re going for a High Score, but there are ‘Missions’ to complete for an extra challenge, like getting “3 Perfect Hits”, last 20 seconds or reaching a certain number of points.

There’s nothing particularly eye catching in Boom Dots. It has pretty minimalistic design… Just circles, triangles and plain text in the front layer; for the background, you see an arrow pattern, and a few white dots to give the impression of an old Space Arcade Shooter. It’s animated and it flashes with every hit, but you won’t see any fancy lighting special effects. 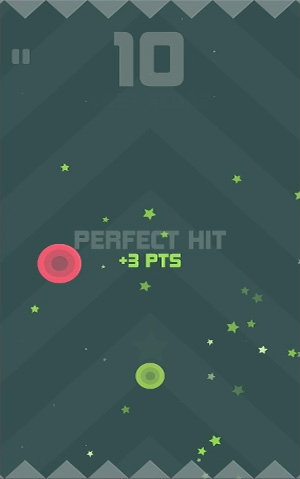 You see a explosion effect with stars appearing when you hit a dot, and after completing a few missions you can select different designs like donuts, hexagons and other figures other than circles, but that’s about it. If you’re looking for an eye candy 2D game, this is not what you should download. 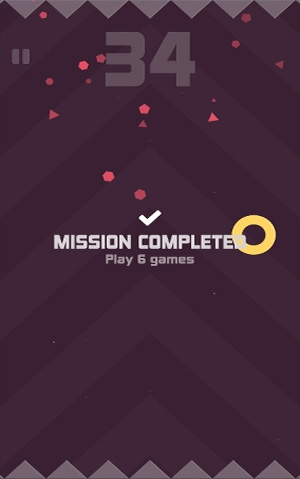 The focus of Boom Dots is its addictive gameplay. At first it’s gonna be hard just hitting 10 targets, but once you get the hang of it, reaching 50 or more will become your average score per play. If it was just an Infinite Level, 5 minutes of play would be enough to put it down, but it has “Missions” and unlockable dots designs, and that gives the game replay value, so you may find yourself hitting targets for more time than you’d expect when you started playing.

Boom Dots is free on Android and iOS but it does show a video ad every minute or so. You’ll see about 3 commercials in a 5 minute play through, but you can skip them after 5 seconds, and they don’t really feel annoying, unlike some games where they appear every time you lose a level. You can buy the “Ad Free” version if you wish to support the Developer. A few minutes of playing should be enough for most people before moving on to another game, but the gameplay can get pretty addictive for those looking of a great one-tap challenge.

Boom Dots is a simple Arcade style single-tap reaction game with addictive gameplay that will test your reflexes in the same way High Score Coin-Ops worked back in the day. Most people will be fine just getting 50 points and leaving it at that, but there are 200 missions to complete if you get hooked. Pros Cons