The ultra popular Rhythm-based Action Platforming series has a new entry! Jump in, brace yourself, and get ready for a real challenge! This won’t be easy…

Geometry Dash SubZero is a new entry in the challenging rhythm/platfomer hybrid where you must survive as a square character jumping over obstacles such as spikes, razor sharp objects such as saws and monsters trying to eat you. 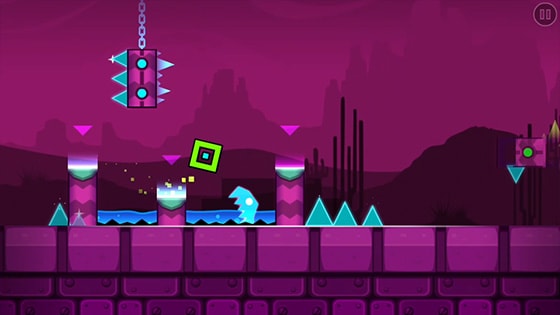 In each level your objective is the same, to reach the goal at the far right of the stage. One you start, the cube advances automatically, and the only thing you do is tap the screen to jump. Sounds simple, but sometimes is best to not jump in order to reach the next platform, and there are also golden trampolines to step on to perform a huge leap, and yellow rings to take for a mid-air jump, making this runner more advanced in level design than most. An original feature of this series, is that the stage is building itself as you go, making it very unpredictable since by watching the right side of the screen you can’t tell for sure what’s coming. Also, the difference between this game and the rest of the franchise, is that here the screen zooms in and out, and in some sections you can fall into a pit and land to a very different scenario, throwing you into an unexpected set of obstacles. Apart from jumping, there are blue trampolines that shift the gravity, so you’ll be moving while on the ceiling, and there’s another portal that shifts your direction, and you’ll be traveling to the left side of the screen while the scenario changes. Besides the square, sometimes you get into a plane, and here you touch the screen to gain altitude, and release your finger to go down. This parts of the game are easier than the rest, but aren’t made to be taken lightly, since a new obtacle can appear at any time.

Just like the name implies, contrary to Geometry Dash Meltdown which primary makes use of tones of red, this edition of the game features tones on the cool color spectrum, so you see more blue, green, purple and black. 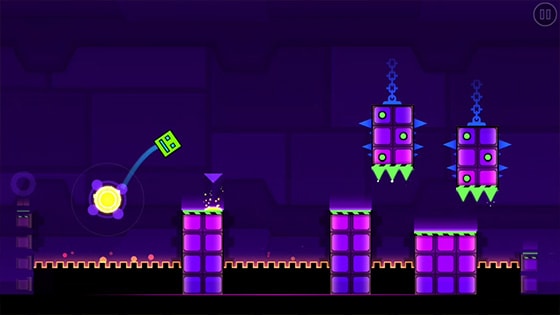 While the game uses mostly geometric shapes, it’s actually very eye catchy, and makes use of gradient colors, transparency effects, glowing elements and bright light sources to create a very visual rich experience. The animation itself isn’t very complex, since the square just leaps and turns 90 degrees in the air, and the elements on the screen just appear by moving as they are into place, with no animation frames or moving parts on most of what you see. Still, what makes this title visually appealing is the use of light effects, that makes it look like a giant Las Vegas neon sign, and with everything lighting up in sync with the beat of the music, you’re in for quite a espectacle.

Geometry Dash SubZero comes with 3 very long and challenging levels, with more coming soon according to the developer. The level design is praise worthy and the music is superb, but besides reaching the goal in these 3 levels, there’s nothing much that gives it replay value. 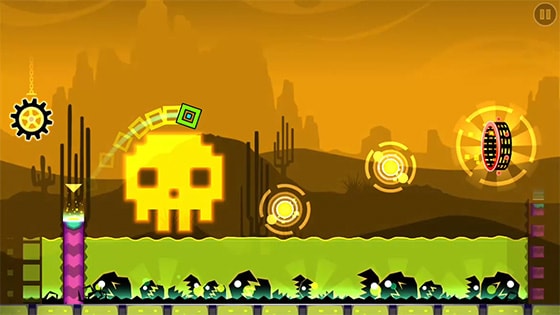 An avid player of the runner/platformer will love the fast-paced challenging action here, but after beating the levels that come with the free edition, it is unlikely they’ll stay and try to unlock new figures and planes to play with. The paid version comes with a level editor and you can play levels made by users all other the world, so that version has potential for unlimited gameplay. There’s also a practive mode that has checkpoints so you can continue almost in the same place you lost instead of starting over from the beginning. The problem is that some checkpoints are poorly placed, and it may take you several attempts to pass an obstacle that is so close to the checkpoint when you continue.

Geometry Dash SubZero has a free version on Google Play and the Apple App Store, and there’s even a web browser version. Ie you’ve enjoyed the previous entries of this series, be sure to download it; but only if you beat the 3 levels and are really hooked into it should you consider the paid app.

Geometry Dash SubZero succesfully continues the series of fast-paced rhythm platformers with the characteristic level design, challenging gameplay and great music. Even if you haven’t tried the other games in the franchise, you should check out this new entry and see why it has millions of users eagerly awaiting for a new sequel every year. Pros Cons