Robot Thief by Omega100 Studios is a 3D Adventure Game about exploring ‘El Dorado’ ruins. Try finding the exit of each level quickly, but beware of the dangers of the levels.

Robot Thief is an exploration adventure game seen in a Top-Down view. Here you take control of a little robot that’s exploring some ancient ruins for treasure a la Tomb Raider. The robot controls just fine with a virtual twin stick. You use the left one to walk around, and the right one to move the camera. 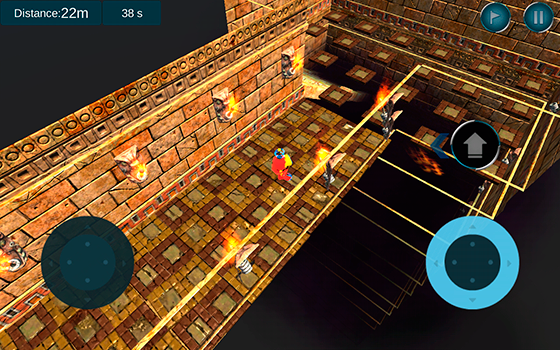 The game works in ‘Go from Point A to Point B’ missions. You start a level in an open space of an old Aztec Temple or something like that, and need to find your way to the treasure. There will be many obstacles trying to make your journey come to an end, moving walls, electric traps, statues that throw fire or arrows, huge stone balls trying to make you a cyber tortilla, and fake floor boards that make you fall to your death… Or more like premature deactivation. As an exploration title, is just midly entertaining, it feels like a mediocre 3D game that came out in the mid 90’s. Back then, it would have caught the attention of people because of the graphics, but nowadays, there are just many more games in the same style with more actions to perform and that offer more content. You’ll possibly beat 2 or 3 levels and then leave it at that.

Robot Thief looks OK, nothing really spectacular, but on the level of “what you’d expect” for a mobile 3D game nowadays. It is certainly not ‘blocky’, the textures on the floor and walls look pretty good, effects such as fire and electricity have a nice visual look and animation, and the models of elements such as statues and treasures look just fine. But that’s about it. 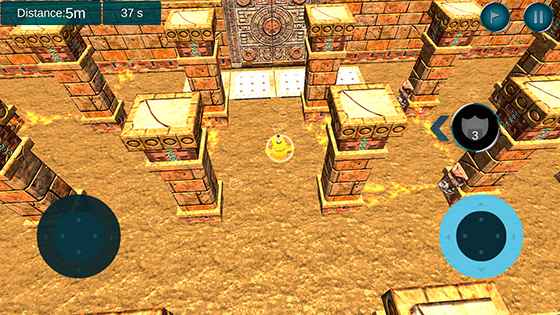 It should be said that the story is told by a Visual Novel, and the panels look great. The drawing style and color are great quality and you’ll probably spend a little more time after you read the dialogs to appreciate the art. But back to the game, it’s a nice effort by the developers, but there are some really cool looking 3D games on mobile nowadays, and Robot Thief is best described as ‘average’.

Robot Thief is a pretty simple and straight forward game, just move around while avoiding dangers, but there are a few power ups to collect, such as a golden armor or a shield that lets you take extra damage. You can also unlock new robots with the gold you collect, and there are Google Game Achievements you can get. 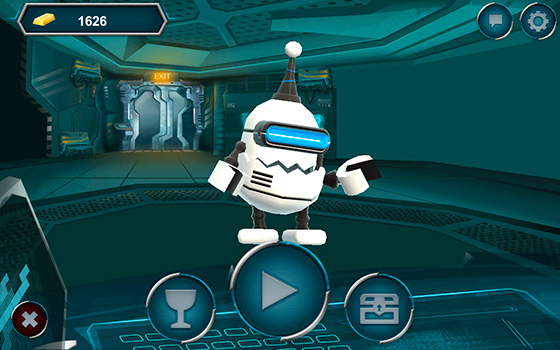 The music is fine, but nothing really memorable, and so are the sound effects. This game shows that the developers thought out of everything and even added some extras, so the game runs just fine and it gets the job done, it provides you with entertainment, but it’s just not that fun, and you can find 3D Platform Adventure games that are similar, but surpass this game in every aspect. Taking into consideration that it was created by a small studio, they made a good job, but if you’re looking to have some serious fun with a Top-View 3D title on your phone, you’ll probably skip this one.

Robot Thief is completely free on Google Play. You won’t see annoying video ads or banners every minute like other titles, and you don’t need to purchase anything to enjoy the game. Try it out, you don’t lose anything.

Robot Thief is a mediocre game. While everything is taken care of, and you can’t really call it a “bad” game, it just does not stands out in any aspect. Sure, there are some really bad games on Google Play, which Robot Thief beats on terms of overall quality, but to say that a game works, doesn’t necesary means that is fun for more than a couple of minutes. Still, is free, so you can go and try it out for yourself. Pros Cons