Surf as far as you can. Through the oceans, caves, snowy hills and deserts full of sand. Check how fast you can swipe up and down, try the double swiping with both your hands to reach the high score. Remember – in Surfingers the waves are under your control.

Throw2Rio is a sports game based on the Olympic event “Javelin Throw”, where the objective of the game is to run to build up speed, and send the pole projectile flying as far as you can before stepping on the fault line. 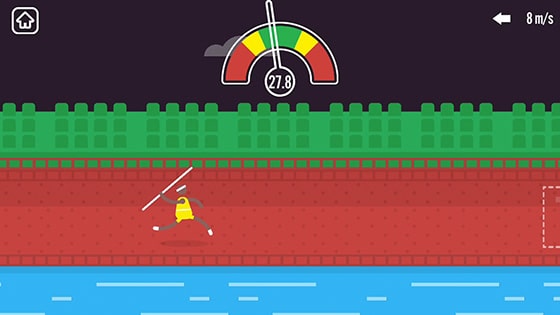 Just like Konami’s classic Arcade series from the 80’s “Track & Field”, this title has a simple approach to the way you control the build up run and throw. At the start of the first try, a speed gauge appears in the center of the screen, and you make the needle move up by touching anywhere on the screen, and let go so it goes back down. Your objective is to keep the needle in the green section of the gauge, which can be troublesome given how quickly it moves as you press and let go of the screen. Once you get into the throwing area, you set the angle of the throw by pressing the screen, and when you let go you’ll launch the javelin at the set degrees. It shouldn’t be too low or too high, but there’s also a wind indicator in the top right part of the screen that you should take into consideration. With no wind, a good angle for a throw would be about 45 degrees, with the wind in your favor, maybe around 50-55 degrees, and when it is against you, about 40 degrees will be better for your try. If you step into the fault line, you’ll lose this turn and get nothing, so be careful. After your first throw, you’ll get another try, and in the runway you’ll see your previous attemp distance, as well as your best record. After your 2nd try, you’ll see how well you did compare to other competitors, and get a medal if you were on the top 3.

Throw2Rio has simple 2D graphics that actually look like children doodles on a coloring book. It has a minimalistic design that maybe be based on classic Olympic Arcade games from the 8-Bits era, but in a “smooth” webgame style. 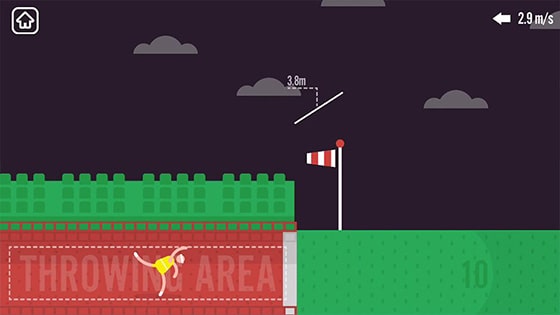 The background is just a dark sky, the green fields, the redish track and a little blue river in the bottom of the screen. At least it isn’t just flat color, as you can see a dotted pattern in the runway and throwing area, but overall, it’s just overly simplistic. You can choose the country you want to represent to change the colors of your uniform, but the athete is basically the same rounded “stick” figure with very little animation. But it’s worth mentioning that the javeling physics work pretty great, and the way gravity and winds affect it is seen in smooth animation, and also the distance counter that appears on top of it.

Throw2Rio doesn’t have much to offer besides just trying to break your previous record, and it can be entertaining to try and win at least a bronze medal, but overall, track and field games available for the old 8-Bit Nintendo were a lot more interesting and fun to play overall. 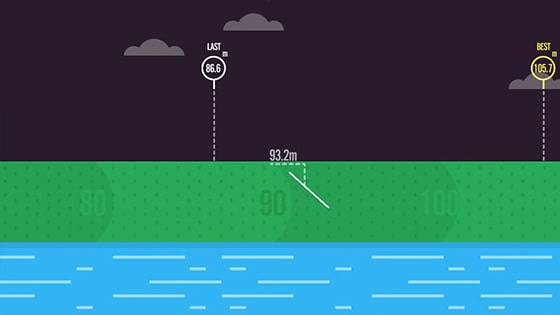 The music and sound effects are forgettable, and while given the minimalistic overall design of the game it really doesn’t matter, it could improve many aspects to keep the user attention a little longer.

Throw2Rio is free on Google Play and the Apple App Store. It displays ads now and then, but that’s to be expected. You can get the ads-free version for 99 cents, but given that there aren’t any real challenges besides the main mode and “duck hunting”, the average player will probably just try a few throws for free and leave it at that.

Throw2Rio is an average sport casual game. While there aren’t that many javelin throwing games, you can find titles with a similar approach to launching something, with better graphics, audio and stuff to do besides just trying to break your previous record. You should play it only if you want a very minimalistic and simple to play game to kill some time. Pros Cons