Wind Runner Adventure by Joymax is a beautiful looking action platformer where you collect treasure in fantasy worlds at high speed. While it has simple One-Tap gameplay just for jumping, you can climb, slide, rappel, jump in mid-air and use elements in the levels to go flying at high blazing speeds. Can you collect all the stars?

Wind Runner Adventure is a one-tap action game where you take control of the runner Chloe who is searching for treasure in a fantasy world. Just tap on the screen to jump, and tap again for an additional in-mid air spinning jump. 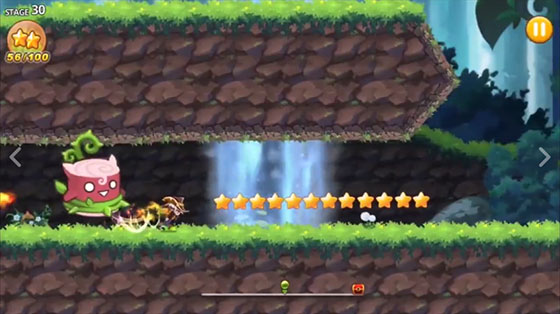 Along the way you’ll find hooks on ceilings to advance while hanging on them, and on walls to climb up. When you get to a wall without hooks, you’ll begin sliding down, and when you tap the screen, Chloe will jump to the opposite side. Sometimes there are two walls close together and you can go all the way up by jumping between them. You can also move on ropes, some times by hanging on them, and other times by using a rappel, which makes you go fast. The overall objective of the game is to collect stars scattered around the stage, and get to the end of the level. You’ll lose if you fall into an abyss, bump into an enemy or touch spikes. Like in many sidescroller platformers, you can jump and land on the head of enemies to get rid of them. You can equip a magnet to attract the stars close by and a shield to be able to take one hit without losing the level. If you lose, you can watch a video ad to continue if you’ve reached the checkpoint in mid-level. If not, you’ll have to start over. Along the way you’ll find trampoline mushrooms that will send you flying a long distance, and can use them to reach the big stars that are worth 10. In the top left part of the screen you can see how many you collect. In each stage there are 100 stars, and your Star Rank when you beat a level will depend on how many you have when you reach the goal. Just by completing a level, you get 1 Star Rank, if you collect 40, you get a 2 Stars Rank, 70 gives you a 3 Star Rank, 95 for 4 Star Rank, and you need to get them all for a perfect 5 Star Rank. Depending on your star rank, you’ll get a treasure box when you finish a level, that will have golden coins you can use to purchase costumes for the characters. You unlock the 2nd character at level 10, and the third one when you reach level 20. 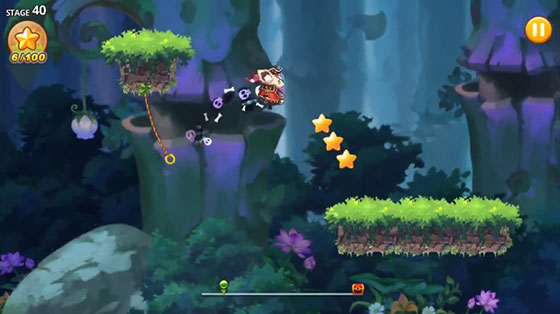 The character animation is nice, you’re always seeing movement, and the enemies have facial expressions depending on your actions. One thing that doesn’t look very good, is that when you turn around, the hero suddenly becomes a mirror image, and that’s it, there are no frame of animation that let you see your character’s front like in Mario World and other classic platformers, it just suddenly flips over, which seems weird at first. The backgrounds look great, they’re pretty detailed and you can see many layers of elements that give you a good dept feeling. You’ll see some special effects such as flashes and shiny sparkles when you collect the stars, and they’ll go to the top left corner to be collected in the star counter. The shield and magnet give the character a nice looking aura of distorted flashing light, like a force field, and the costumes make you leave a colorful trail that depends on the character, for example, pirate Chole has a trail of little black and red skulls.

Wind Runner Adventure has dozens of beautiful levels in many different settings, 3 heroes to choose from with lots of costumes and many variables to the run-tap-to-jump gameplay to keep things interesting as you go collecting stars. 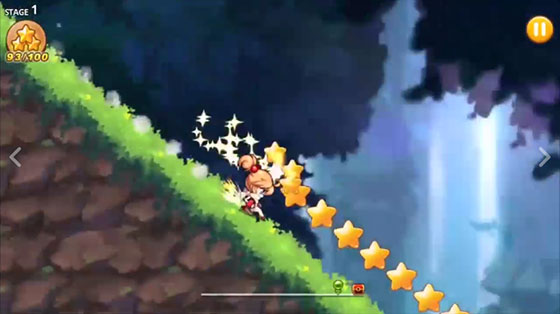 On each level you’ll find alternate paths you can take so you may want to try the same stage twice to see if you collect more stars by going the other way. Things like not taking a mushroom trampoline, or jumping down a cliff to realize there are platforms below, add replay value to the game. And since you can also climb, balance on ropes, use rappels, slide down steep hills and hang on ceilings, is a more complete experience than similar platformers when you just avoid enemies. The gameplay is quite simple, but the excellent graphics along with catchy music the voice work, make for a runner experience that may keep you going for quite a while.

Wild Runner Adventure is free on Google Play and the Apple App Store. You’ll only see advertising at the end of a level if you wish to earn a few more coins, or if you lose to be able to continue at the check point. Just by playing, it’ll take some time to be able to buy costumes, so if you want to support the developers, you can buy a package of in-game coins to purchase the extra stuff, but it really doesn’t affect the gameplay experience.

Wind Runner Adventure is a nice sidescroller with simple tap-gameplay that may get the attention of casual player, but has enough elements to attract old school platformer gamers. The graphics are pretty awesome, and while just getting to the end of each level is not very hard, the real challenge is to collect all 100 stars in every stage, so there’s ome replay value. 2 characters to unlock and lots of costumes to get may keep you playing for quite some time. Definetely recommended if you enjoy runner games. Pros Cons