A legendary Dragon is haunting the lands. Towns are set ablaze, and its magic power resurrects the evil creatures of the world. A hero is needed to travel to the corners of the lands and slay the beast to restore peace. All while collecting gold and treasures to level up and get strong enough to complete the quest.

Loot Hero DX is a sidescroller adventure game where you take control of a knight slaying hundreds of enemies. A dragon has aweakened and you must defeat it to restore peace to the kingdom, and in your way you must face hundreds of monsters. Just keep going right, destroy them, collect the coins they leave to upgrade your weapon and armor, gain XP and level up to get stronger and complete your quest. 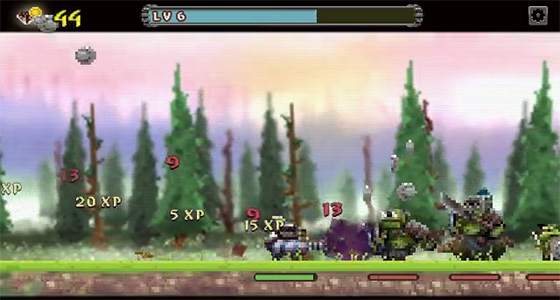 The gameplay is simple. Just more until you encounter an enemy, and then you’ll clash. You’ll do damage depending on your Attack Power, and lose HP depending on your Defense. If you’re lucky, you’ll do a Critical Hit, which you can also upgrade.You can see your Hit Points in a green bar below you, and the monsters have a red bar. When you’re not attacking, you’ll start regaining health, and you can also get Red Potions which some monsters drop, and they restore some health points. On the upper left part of the screen you’ll see how much gold you have. After a wave of enemies, you’ll get to an Inn where your HP bar is refilled, and you can upgrade your abilities, and also change your walking speed. The objective of each level is to go right until you reach the Boss, and once defeated, Mission Complete, and you can go to a new area. As a casual game, it works just fine, when you encounter strong enemies, it’s better to go back to collect gold and level up, and then continue your quest. Sometimes you find a Yellow Potion that makes you really powerful for a short while, so instead of going back you can continue to regain health at the next inn.

Loot Hero features nice Pixel Art. The main knight actually changes with every upgrade, and you can see how the hero’s lance changes and becomes bigger when you level up attack, and can get a steel drill or metal spiked ball at the tip. The armor changes color when you get more defense, and the walking animation raises more dust when you upgrade speed. 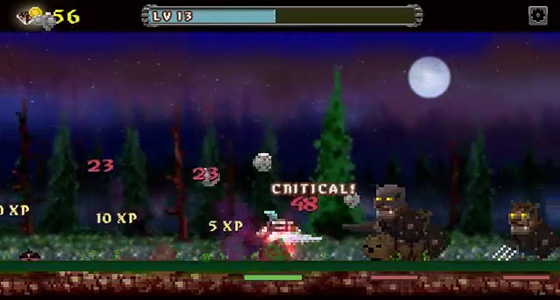 There are many different setting for levels, such as forest, desert, caves, snowy mountain and the like. Each place has unique monsters, like in the forest at night, you can see a full moon at the background, and you fight werewolves, and in a bamboo forest inspired in China, you see ducks riding panda bears. Each level has unique enemies and scenery elements, so even if the gameplay is too simple, you’ll want to continue the adventure just to see what more you find. Beside the tradicional pixel based animation, you’ll see some light, fire and transparency effects, which make for a pleasant visual experience. The experience points, silver and golden coins, diamonds and items move around the screen in a nice bouncy way, and the background has 5 layers of parallax scrolling, for a 3D look.

Loot Hero is entertaining enough to finish all levels and slay the dragon at the end, but it’s a really short adventure and gameplay wise you basically just walk left or right and that’s it. The level up and collecting aspects of the games are a nice addition, but since you interact so little in the actual action, maybe it won’t keep your interest that long. 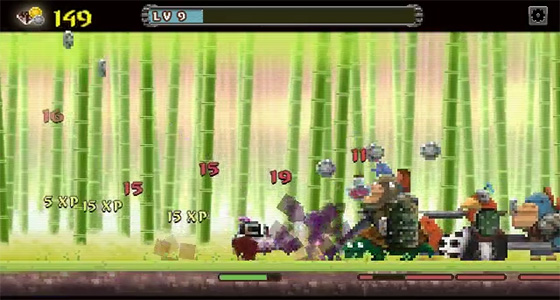 The graphics are really good with a unique pixelated design, and there are many enemies and other stuff to find, which may keep you going to see what new content you find out later on. It’s also worth to mention the music, which is made up of great catchy chiptune soundtracks, that even got released on an OST thanks to plaers requests. But still, the gameplay itself could have been better, requiring more interaction from the player, like in the similar mobile game Slayin’

You can get Loot Hero DX for $0.99 on the Apple App Store, or download the free android version, which of course it’s loaded with ads. For less than a dollar, it’s a nice experience, and it is worth the effort that the developer put into it, but if you’re looking for a challenging game where you actually play, and you test your reflexes and control ability, this one isn’t for you.

Loot Hero DX is an interesting concept, gameplay wise is too simplistic and it may be boring for some players, but its nice graphics and animation, along with catchy retro style music, will find a place in mobile gamers devices. Play the free version if you can, and then decide for yourself if it’s worth spending 99 cents on the full experience. Pros Cons