Here is a new and addictive time-killer app! Check out Retro Runner 8Bit. It’s an endless runner game with a nostalgic 8-bit style. Get as far as you can while dodging obstacles.

Retro Runner is a high-speed sidescroller game with an 8-Bit style that will test your reflexes to the max in an endless random generated level. Just tap to jump at the right time, avoiding bottomless pits, spikes on the floor and ceiling, razor sharp metal saws and other deadly traps along the way. 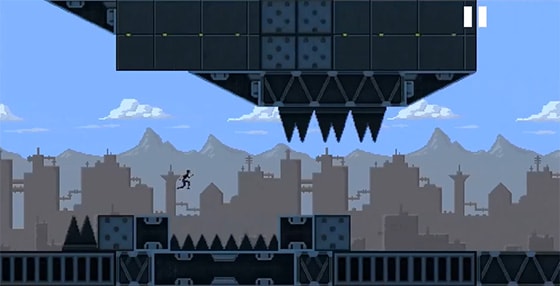 The pixel character runs at the same speed all the time, and once you start playing, the only thing you need to do is to tap on the screen ir order to jump, and survive as long as you can. Of course, you can’t really memorize the level layout to advance a greater distance the next time, since elements in the areas will slightly change each and everytime you play. Sometimes a trap will be right next to the other, so the right timing when leaping over the air will be of extreme importance. Also, the guy you control looks extremely small, but that’s because since it’s running so fast, you have to see far ahead to what’s coming from the right side of the screen to be able to react on time. When you die, you only see the distance traveled, and have to start over to try and get a few meters more. Like old arcade titles, your only goal is to achieve a greater score the next time.

Retro Runner features pixel art 2D visuals, it goes for a graphic style that reminds of home computers platformers from around 1990. There aren’t many elements in the levels, and the main character doesn’t do anything besides running and jumping, but for old school gamers, that’s enough. 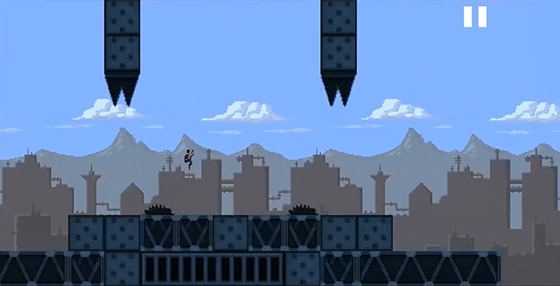 There’s parallax scrolling to give the feeling of dept, and while you only see the silhouettes of factory buildings and a simple landscape at the background, given the simplicity of the game, it fits just right, and this way you can quickly notice the platforms where you can jump on to, and the traps you must dodge. The only thing moving besides the main character are the metal saws, and you see no reacting from the running man when you hit something. It would’ve been nice to see different movements by the runner like in some parkour inspired runners such as Vector, since modern players may not like the stiffness of the pixel man displayed here.

Retro Runner doesn’t have you collecting items, activating switch or anything else besides avoiding things that kill you, and only by jumping. This game doesn’t try to do anything complex, and keeps things simple but challenging, since the level scrolls so fast that you’ll feel like you’re playing a Sonic title. 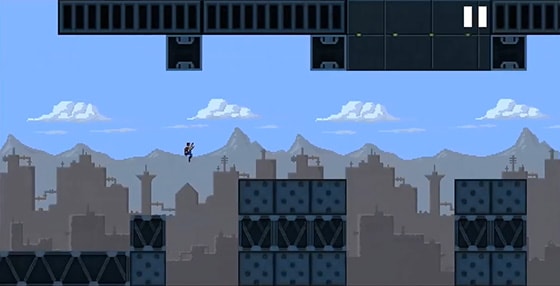 The music is a nice chiptune that really takes you back to the first years of 16-Bits platformers. It doesn’t loop so fast that it becomes annoying, and it really helps to set the “retro” feel; but you won’t hear any sound effects. There aren’t any achievements or anything extra to make you keep playing after you get bored of the main mode. A casual player may just want to reach the middle of the 2nd area and that should be enough, but runner game enthusiasts that really like to test their reflexes in fast-paced titles, will find this pixel adventure to be quite addictive.

Retro Runner is free on Google Play. You’ll see some advertising when you lose, but that’s to be expected from this kind of games. If you’re a bad player, you’ll probably find the video ads annoying, but if you really try to get a new record everytime you play, you won’t find the advertising intrusive at all.

Retor Runner is a nostalgic title, and any retro gamer that likes the challenge of old arcade titles will enjoy it, at least for a while, but its simple presentation may not be of the taste of the modern mobile user. If you’re looking for a challenging high velocity platformer with a random generated level, and don’t mind the old looking graphics, check it out. Pros Cons