You control Mario by tapping as he constantly runs forward. You time your taps to pull off stylish jumps, midair spins, and wall jumps to gather coins and reach the goal!

Super Mario Run has many elements from the franchise classic console games, but it’s mostly just like a regular sidescroller mobile runner where you advance automatically and just press the screen to jump, the longer you keep pressing, the higher Mario will jump. 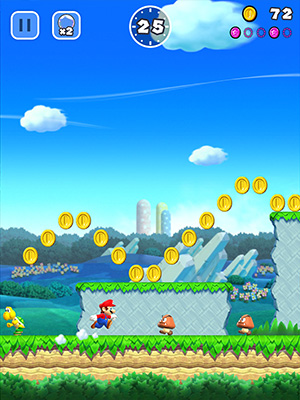 The objective of each level is just to run to the right until you reach the goal. Mario is capable of leaping over small enemies and obtacles without havingto tap the screen, and he can also perform wall jumping and grab on to ledges of platforms. Like in his first NES game, if you get hurt, you become little, and by punching “?” Blocks from below, you may get a mushroom to eat it and become big again, in this state you jump higher and can break brick blocks. Along the way you can collect golden coins that you can later use to buy items and buildings for the Mushroom Kingdom. Hidden in the level there are 5 Special Pink Coins, that you need to collect to be able to enter in Bowser’s Castle, which is the 4th Level of each World; and once you collect all 5 pink stars, you can try and get other 5 colored special coins, which will be placed in other parts of the level. This gives an extra challenge to each stage, boosting the game’s replay value. Each level has many alternate paths to take, and power ups besides the mushrrom like the Star Man, which make Mario invencible and faster for a while. There are also special blocks like a red block with a pause button icon, that makes Mario stop until you tap on the screen, 2 fast forward arrow blocks, that if you tap while you’re on them, makes Mario jump really far to the right, and there are blocks with arrows to the left, that make Mario jump backwards when pressing the screen. Besides normal world levels, there are Toad Races, where you compete against a Toad trying to get to the goal faster, collect more coins, and also impress an audience by performing more acrobatic stunts. Getting toads impressed in this mode let’s you buy buildings for the Mushroom Kingdom, and can also unlock Bowser’s Castle if you can get 100 audience toad impressed.

Super Mario Run is what you call a 2.5D visual style. Characters are 3D models moving over 2D platforms, with a foreground and background layer that’s only a simple image, but scrolls and zooms in and out depending on your actions. 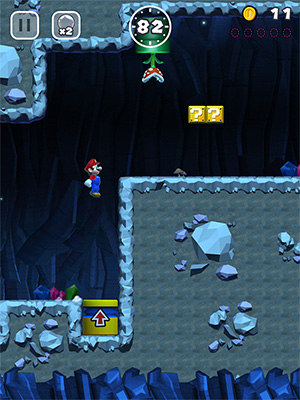 The worlds enviroment start just like in Super Mario Bros. World 1-1 is a forest, then you enter an underground level, later you’re in the sky jumping over big mushroom platformers avoiding flying koopas, and finally you get to Bowser’s Castle, full with lava pits, spike traps and Dry Bones. The characters look nice and are very well animated, but the platforms and backgrounds are static 2D. There are a few special effects like when Mario lands on an enemy and you can see sparks and little dust clouds lifting from the ground when he runs and jumps, and the sparkles of the Star power up look pretty good. Overall, is not really the best looking mobile game out there, but it has the classic Nintendo visual style that it’s always appealing to everyone, specially younger players.

If you’re expecting Super Mario Run to be in the same level of quality as the series Console games, you’ll be disappointed. Here you have an enjoyable runner game meant to be played with one hand in your phone or tablet, a casual adventure meant for the common mobile user, not a great adventure like Nintendo’s mascot always has in home systems. 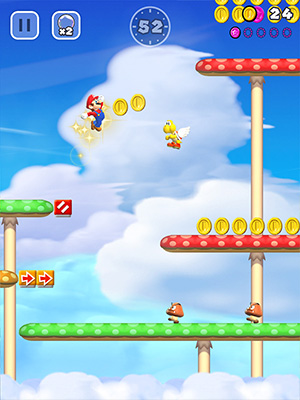 Besides the main platforming levels, you have a “building” aspect in the game, you have a world map where you can set shops with items and bonus stuff, as well as just place some ornaments like green pipes, Yoshi figures and other common elements for the Mario franchise. The music is pretty good and nice to listen to, mostly re-arrangement of classic tunes, and all the familiar sound effects from Mario games are here. Besides this game is translated to 11 languages, so more people are able to enjoy it.

You can download Super Mario Bros for free on Google Play and the Apple App Store, but you can only play the levels of the first world, if you want the full experience, you’ll have to pay $10 to unlock the full game. For a mobile game, that is way too much. Mario games on 3DS may be worth $35 and even $60 on home system, but those are much bigger games than this casual mobile title, and for the average casual user, anything over $5 is just too expensive.

Super Mario Run is a nice runner title, but at its current price, is just too expensive for the average user. If you’re a big fan of the series, check out the free levels and then decide for yourself if you want the full experience. Pros Cons