Guide two brothers on a quest around the world to save humankind from a massive alien invasion! Pang Adventures brings new features and gameplay to this arcade legend while keeping true to the original spirit of the series.

Pang Adventures is the 5th entry in a series of mid 90’s shooter platformers where you take control of a hero using a harpoon to pop giant alien bubbles that split into smaller one when you hit them. 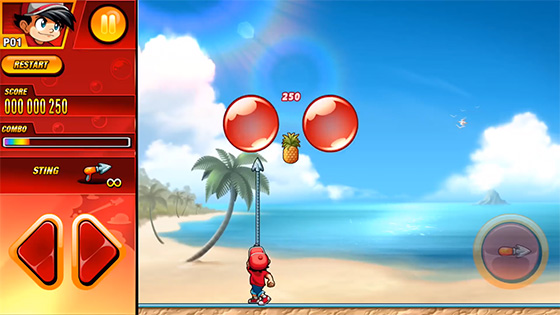 In the lower left corner, there are arrow buttons to move left and right, and you have your weapon icon in the lower right corner to shoot. You start out with a harpoon, that has a rope attached and goes up until it hits the ceiling. If you hit a bubble, you’ll divide it in two, and each half can be divided once again, and those parts can also become appart one last time. You can only shoot one harpoon at a time, while one is in the screen, you can’t shoot again, unless you get the Double Harpoon Weapon. You win a level when all the tiny bubbles bouncing around are popped. At first you’ll encounter giant blue bubbles that bounce up and down like a normal basketball would, going up and down being affected by gravity. Later you’ll see faster smaller ones that behave like a pong ball, bouncing in an angle and going all the wey until the edge of the screen and bouncing back at a constant speed. And there are giant red balls that bounce on the floor like the first ones, but they’re faster. In the levels you’ll also see animal enemies such as giant crabs that attack you, and you can take out by hitting them with your harpoon. If you get hit by some animals, you die, and also when a bubble touches you. Some animals like the hermit crabs just make you dizzy, but then you’re open to get hit by a bubble. There’s a shield item that lets you take one hit without dying. By popping bubbles or colored platforms, you may get an item for score, like candy, fruits or other kind of food. They’re just worth points and don’t have any effect. If you collect a clock, it will freeze time for the bubbles, making them all stop in the air, and you can even touch them without being harmed. As for weapons, you can get a double harpoon, a Machine Gun, a FlameThrower, a ShotGun, a laser ray, ninja stars and a special harpoon that gets stuck in the ceiling and leaves a rope attached to the floor, and it can stay there until the rope gets hit by a bubble. Just keep in mind that all weapons have limited ammo, so don’t waste them. After a few levels, you’ll have a Boss Fight, and you’ll have to shoot one of the space invaders until you defeat it. Once you win, you’ll travel to a different location to pop bubbles. Each setting has different obstacles depending on where you are.

Pang Adventures features hand-drawn 2D visuals that make it look like a cartoon TV Show. The characters move around nicely, are quite expressive and each weapon has unique ways of affecting the heroes. Like the shotgun that makes the camera shake everytime you shoot. 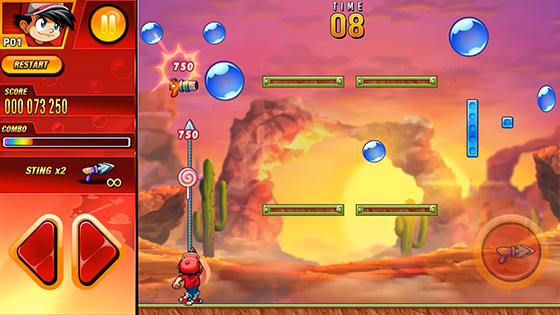 When you hit a bubble or enemy, you’ll see sparks coming out of the hit spot, and all weapons have special effects that make the game look gorgeous, like transparency in the fire of the flamethrower for a more realistic look, or the smoke leaving the machinegun after a burst of bullets. The bubbles have a shiny design, with brighter and darker spots for a more 3D dept feel. Besides bubbles, there are some colorful platforms that you can also shoot to make disappear, and they go away leaving fading sparkles in their place. The backgrounds look like paintings, with the sun light causing lens flare effect, and depending on the stage you can see the sun rays passing through some elements in the scenery. They’re mostly static, but the beach has very realistic looking water, with animated waves, and it looks great. Overall, it may not be the best looking 2D game available for mobile devices, but the visual style it’s sure to be remembered given its quality.

Pang Adventures has oven 100 levels to play in 3 different game modes. World Tour, Score Attack and Survival. There’s a 2 player mode and for the first time in the Pang series, you have boss fights after winning all the levels in each location. 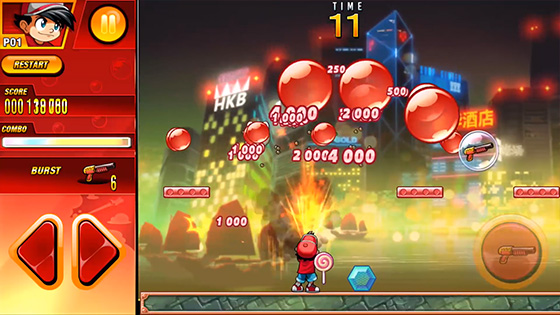 Each level has a unique design, and they’re not easy at all. You can expect the level of challenge of a 90’s arcade, which means that you’ll probably won’t beat each level on the first try; but don’t worry, you have unlimited continues in Arcade Mode. The first levels starts pretty simple, only you and the bubbles in a square. Later on, there will be enemies, static platforms, moving stage elements, and hazards like bomb bubbles, electric ones and even some filled with lava that you must avoid. In previous Pang games, you couldn’t jump, but there where stairs to go up and down in the stages; here you won’t find them, but given the excellent level design, you’ll probably won’t miss them.

Value for your money 87%

Pang Adventures is worth $3.99 on Google Play and the Apple App Store. For most people, it may seem like a bit much, since there are comparable games worth 3 dollars or less. It’s a very reasonable price for fans of the classic series, who surely spent much more in quarters back in the day with these games; but for a new player, it may be a dollar too much.

Pang Adventures is a great arcade title that it’s recommended for those that enjoyed any game of the franchise in the 90’s, now with more weapons, enemies, types of bubbles and even boss battles; and of course, the 2-Player mode, that not much games feature nowadays. The asking price isn’t cheap, and users that aren’t familiar with the series may think twice before buying it, but if you’re looking for a revamped arcade experience, you should try it out now. Pros Cons