Beneath the Lighhouse is a puzzle game where you have to get a round character inside a turning room to the exit. You do this not by rolling the ball-boy, but by spinning the whole room he’s in. 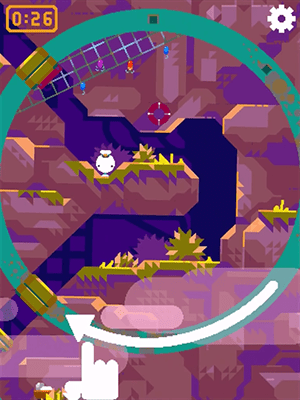 You can see a blue circle surrounding the room, and you turning by touching it where you want and then dragging your finger left or right. The whole room will spin, and gravity will take its course, making our round hero move around. The objective is just to take him from the entrance of the room to the exit, which is marked by golden rings around tunnels. There are traps to avoid such as spikes on the floor. When you touch them, you’ll be teleported back to the beginning of the stage. There’s a time counter on the top left corner of the screen. And when the time is up, you’ll also go back at the entrance, so you should hurry up. Sometimes spikes will be on both sides of a path, so you’ll have to time your wheel turning just right so the character passes right in the middle of them. The first levels work as a tutorial, giving you easy obstacles to overcome. But later on you’ll have to be fast and accurate when spinning the room, and will find moving platforms and some other challenges to keep going and discover the mistery of this old sea building.

Beneath the Lighthouse features pixel art, but in high resolution. It’s not blocky and colorful like old 2D console platformers, which is a style Nitrome’s known for. 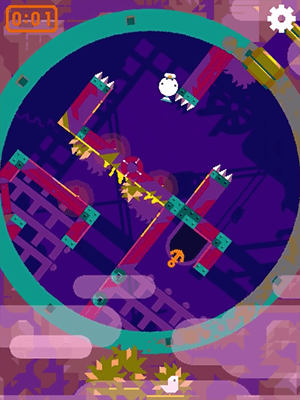 You can notice that the elements on screen are made of geometric figures, with many blocks, traingles and figures with sharp edges. The background is pretty detailed, you can see bolts and rusty metal in the platforms. The room you turn is bright and you have no problem noticing where you can stand on, and what kills you, and there are silhouettes in the back layer adding more dept feel to the game. On the edges of the screen, you can see animated birds on their nests, clouds moving with the wind and other details that make things more lively. The main character may be just a white ball, with it actually has expression, and you can see it opening his mouth when landing from high up, and getting up shaking his head in a dizzy state. Sometimes if you stay still, you can see the round-boy looking at the exit and staring at stuff on the level, which makes him entertaining to watch.

Beneath the Lighthouse has a style of gameplay not commonly seen, some similar titles have you turning the device instead of using touch controls, but do not have the range of motion this puzzle platformer offers. 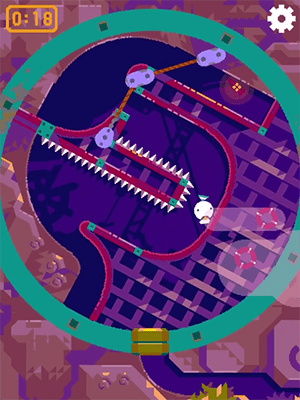 The ball boy has voice over work, the sound effects fit the overal theme of the game, and there’s even a story told by animated cutscenes. There are ambient sounds, like wind blowing waves, seagulls chirping and such, which make you feel like you’re at the sea. The game has some music, but it’s not very memorable and you won’t even notice it while playing. There aren’t many achievements or extra content here. Just beating a level quickly or on the first try. A cool feature would’ve been to collect coins or something in a level, or maybe change the color of the character or have him wear accesories like other similar games.

Value for your Money 84%

Beneath the Lighthouse is free on Google Play and the Apple App Store. You will see video ads after a while, and it’s to be expected, but for  $2.99 there’s a premium version available. Maybe $2.00 would be a more reasonable price, but if you enjoy the experience and want to support the developers, go ahead.

Beneath the Lighthouse is not the first of its kind, but the gameplay here is much more polished than other similar titles, and that along with great level design, nice graphics and a story, makes it a recommendable choice. The price for the premium version may be a dollar too much for the average user, but you can enjoy the full experience with non-intrusive ads. Download it for free and decide for yourself. Pros Cons