Seven Knights: Counter Attack of Dellons by Netmarble, is an Epic Adventure with beautiful art style and great music every fan of the RPG genre should try out.

The game is a Turn Based RPG. You have a party of up to 5 heroes, and go to adventures to fight monsters along the way. You can select 2 characters for the front line, and 3 for the rear. There are mahy characters of many classes to choose from, like Healer, Snipper, Warrior, Fighter, Mage, Knight and more. Depending on they’re attributes, you plan the best strategy for battle. 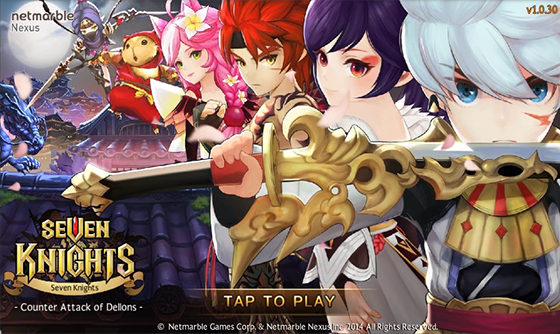 Once in battle, the fight takes place automatically, with the heroes and monsters attacking each other in every turn. You can select special Skills such as a powerful combo, a healing magic, or you can use Summon and have a special hero help you in battle. Like it’s common in RPGs, some attacks trigger status effects, such as Poison, Paralysis, Sleep and such. There are also Deadly Hits and skills that boosts stats, like Defense Up and chance for critical hits. You can equip weapons and armor and evolve items into better forms. Heroes can also evolve and even fusion with other characters to become more powerful.

Seven Knights is one of the best looking Mobile Games right now. The 3D characters are colorful and feature lots of animation. Battles have tons on Special Effects like those seen in Fighting Anime productions. Lighting, motion blur, animated lines, explotions, objects appearing and many other elements that truly create an awesome visual experience. 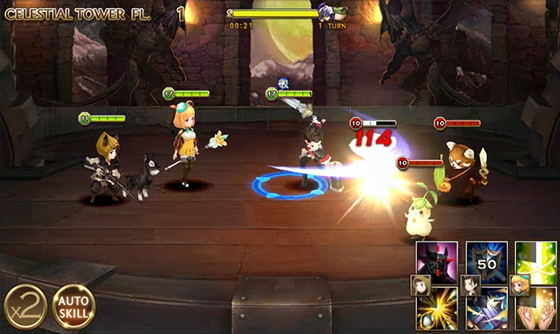 You also get to see great 2D drawings such as pictures that tell the story in cutscenes, and in the game, there are characters portraits, maps, items, skills icons and more. Everything is really detailed, making for an art style really pleasing to the eyes. The backgrounds seem to combine retouched hand drawn images with 3D, with added effects like light, shadows and weather elements such as snow and wind. Another example of such details are the sakura petals falling down in the title screen. There are many layers for scrolling and the camera is pretty dinamic in battles, giving an impressive illusion of dept to the game. Overall, Seven Knights seems to be live world, and it has nothing to envy PC or Console RPGs.

Like many RPGs, the story is really taken care of, with voice acting and beautiful paintings that show how events flow. There are also real time cutscenes that take place while in battle, and even the loading screens show great works of art. 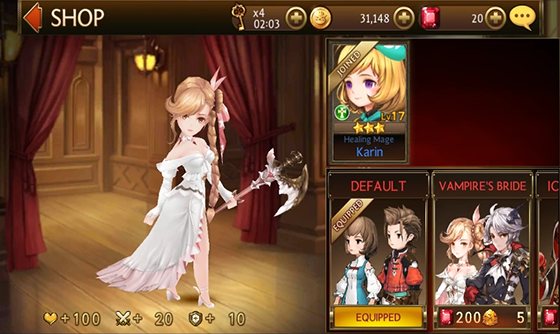 Seven Knights has hundreds of characters, stages, items, enemies and just so much to discover. No complain in the features department… It should keep a user immerse in its universe for quite a while, just browsing around the costumes shop seems to be an enjoyable visual treat. Aside from the main adventure, the game has Battle Mode, Celestial Tower, Daily Dungeon, Castle Rush… Enough to make a player come back every day to level up heroes and keep getting new features.

Seven Knights is free to download in both Android and iOS. It’s a huge game with a whole world to discover without spending any real money. It does not show any annoying advertising, banners or video commercial, you can enjoy the full experience with no need to make an in-app transaction for extra items and such; but you may consider buying extra costumes as fan service to support the developers.

Seven Knights is a game every RPG player should download, it’s a great experience for fans of the genre and one of the most complete feature heavy mobile games there is. Best of all, it’s free. Try it out for yourself right now. Pros Cons