Cannon Land is all about simple but very addictive one touch gameplay that rewards focus and timing, all with super cute art. How far can you make it? Focus and FIRE with simple one touch controls!

In Cannon Land your objective is to shoot a pet character from cannon to cannon to get as far as you can. You start out in a cannon that rotates automatically, just tap anywhere on the screen to send the bullet pet flying; but you have a time limit, if you don’t tap the screen, the cannon will explode by itself. 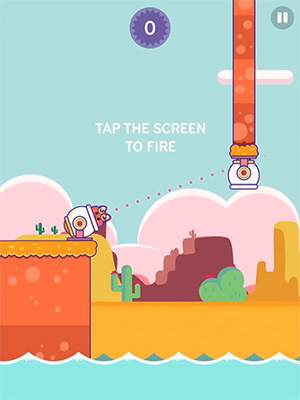 On top of the screen, you’ll see your score. Everytime you move to the next cannon, you get 1 point; but if you manage to go pass your closest cannon and land in the 2nd one, you get double points. Since the screen is vertically oriented, you can’t see very far away. Between cannons there are coins you can collect to buy new characters, some of them play in a unique stage with a custom background. The level layout itself is random. You’re always seeing the same columns, that have the base on the ground, or upside down; but everytime you play they’re arranged differently, so you can’t know for sure where to shoot yourself pass 3 or 4 cannons. When you lose, you can exchange 50 coins or watch a video to continue, or start over. Sometimes you get a gift reward, that can be a new pet, coins or a continue.

Cannon Land features a hand-drawn 2D visual style. The pets are round and cute, have simple costumes and a happy expression. The game uses pastel colors, with just a little shading in some areas, since most of the drawings have a flat single color. 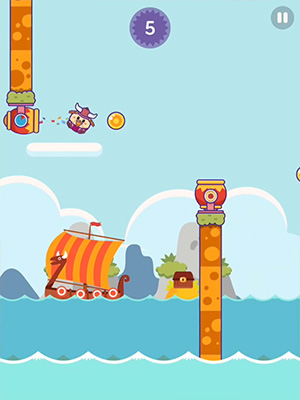 When you shoot a pet, you’ll see that it leaves a trails of tiny golden stars, white sparkles, blue smoke or something unique depending on the character. The backgrounds don’t have many elements, but some characters have interesting settings, like the panda in china, the ox with viking boats, and there’s even a “classic” mouse that plays in a black and white world, with the screen displaying dirt and tiny scratches like in old films. There isn’t much animation to see here, cannons and pets just rotate and translate, with a little size change in the cannons when they shoot and when the pet lands; you can also see the ocean waves moving and boats in some stages, and that’s about it. Still, you can unlock 33 pets, each with a unique design, and there are 7 stages, so there’s more variety here than in other similar random generated games.

Cannon Land features 19 achievements, dozens of characters and many stages to play in. The music is arranged for the custom levels, and in the vintage B&W stage, you can even hear the record skipping sound of old vinyl discs. 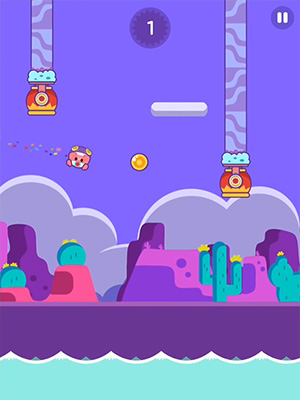 As you play you’ll find some special cannons, and the game will get more challenging; while there aren’t big levels with set objectives to beat like in Barrel Tap Boom, it’s entertaining to play trying to beat your previous record and get on the leaderboards, and it’s always nice to see how you unlock a new pet. It’s also worth mentioning that the game is translated to Spanish.

Cannon Land – Cute Pet bullets is free on Google Play and the Apple App Store. After playing many times, if you don’t see a video ad for continuing the game, you may see some banner advertising, and that’s to be expected. You can buy coins to purchase new pets in the game’s store using real money, but is not that hard to unlock everything the game has to offer just by playing.

Cannon Land is a nice cutesy game to pass some time shooting barrels; it has simple controls and soft lovely graphics, with enough content to make you want to try out a new pet just to see the stage. While most people may stop playing after reaching the 10th cannon, it’s meant for casual players that enjoy cute pet apps with easy gameplay. Check it out if you want to shoot out some adorable animals. Pros Cons