Journey through different worlds as Fred, a charismatic piece of bread who’s goal in life is to not become toast. In this side-scrolling adventure you will battle against numerous foods and enemies alike as they try to turn you into toast.

Toast! is a simple infinite runner game, where you are a slice of bread trying to survive the attack of other foods that want to put you into the toaster and get eaten. 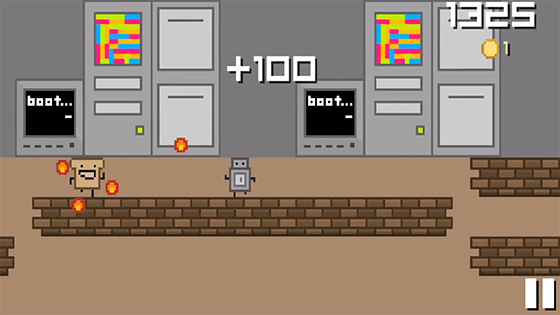 The only thing you do, is tap anywhere on the screen to jump over enemies and from platform to platform. You can’t hurt adversaries by landing on their heads like in other similar games, so you must not touch them and wait until you get a weapon to attack. Along the way you will find items like a giant red chili that gives you 4 fireballs, and you shoot them automatically when an enemy appears. There’s also a block of ice that freezes all characters in place, so you can avoid them easily. You can also collect golden coins to buy new characters, and there’s a magnet item that attracts them to you for a limited time, so you don’t have to worry about jumping to get them; and finally, there’s an “Invincible” rocket you can get into, which advances a great distance while getting rid of whatever foes you find. The objective of the game is just to survive and run the longest distance you can. You will notice that the game becomes gradually faster, hence, more challenging as you go on.

Toast! has a minimalistic pixel art design, the visuals look silly and cartoony. The elements on the screen aren’t very detailed, but you can notice what everything is supposed to be at a glance. 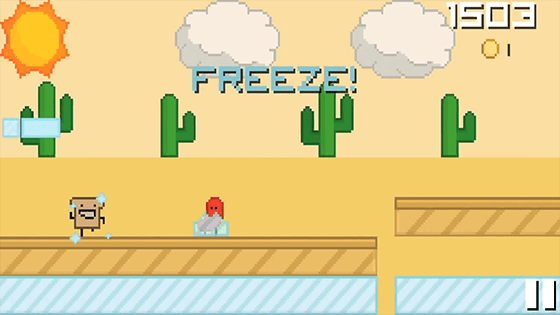 The animation is also kept to the minimum, which characters just having one single motion with another frame, and the backgrounds being static; but at least the scrolling goes on pretty smoothly, and really competes agains a Sonic game when you cover over 10,000 meters and get to the high speed gameplay. The front layer platforms have some diagonal pattern lines, and the backgrounds only a flat color, or just a few objects here and there so it does’t look so boring. Still, the graphics could’ve been so much better with gradient colors or more layers, the way it is, it’ll become a little hard on the eyes pretty fast.

Toast! doesn’t have much going on for it that really sets it appart from all the other infinite runners you’ve played before, just the concept of a bread running around avoiding other edible characters, which sounds funny, but the game itself doesn’t really live up to the expectations you have of a quality mobile sidescroller. 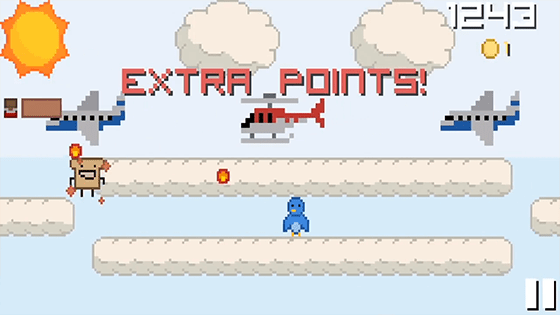 While you change areas every time you cover a certain distance, since the graphics are so simple, you probably won’t play again and try harder to see what comes next, everything feels pretty much the same. To give the game a little variety, you can play with other breakfast such as freid eggs, bacon, a carrot and more, but since they run and jump just the same, you won’t really try to collect a lot of coins to buy them. There are leaderboards where you can compare your distance with other players, and a few achievements you can try to get, but compared to other games of the genre, Toast! is not something you’d try out for more that a couple of playthroughts.

Toast! is free on Google Play. You will see video advertising when you lose, which is to be expected from a title like this, but nothing really bothersome since you can last quite a while everytime you play. Also, every other character is worth 100 coins, which won’t take long to get by an average gamer.

Toast! is just a pretty average runner game. It has just the bare minimum of what a game like this must have, but with a mediocre level of quality overall. It may be amusing to play at the high speeds that you get after covering a certain distance, but most players will probably get bored having to start over from the very slow paced scrolling every time. Pros Cons