Control 24 paws with just 2 thumbs tapping the left or right side of the screen. You’ll be surprised how easy it is to climb, swim, jump and run. Just don’t forget to bring the right cat for the job!

Super Cat Bros, o Super Cat Tales as it’s known on the Apple App Store, is a 2D sidescroller platformer where you take control of Alex The Cat that explores the world trying to reunite with his 5 siblings while collecting golden coins and cat bells. 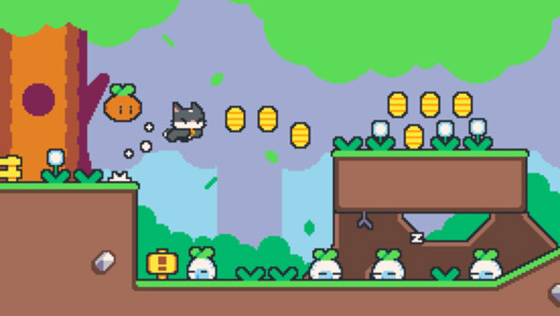 To control your cat, just touch one side of the screen to walk in that direction, and when you encounter a wall, the cat will climb it and go up until it loses momentum and then starts sliding down, but you can tap the opposite side of the screen to jump there. If you tap twice and hold you make the cat run, and this way when the platoform ends, it will jump. If you bump onto a wall, you’ll crash and make the screen shake, which can stun some enemies. If you touch an enemy, you’ll eliminate it, but you’ll get stunned, and if you get hit before recovering, you’ll lose your life. Once you reunite with other cats, you can play with them, and each one has unique abilities. The light gray cat can climb a lot higher than its siblings, the big yellow one can break blocks by running and crashing into them, the blue cat can swim against strong currents and a tiny calico cat can enter narrow passages. On the levels you’ll see pink platforms, and once you’re on them, a button on the top left side of the screen will appear, and you can use it to change character. With the coins you collect, you can buy “helpers” in the store, special friends that attack your enemies, like a floating flower that throws seeds, or a cloud that shoots a thunder. There’s also a ghost that can find secrets in the levels, and a medusa that can attack under water in all directions. The objective of each game is just to reach the goal at the end, but you can collect cat bells and keys hidden among the stages. In some levels you’ll need a golden key from a previous stage to open it and continue your adventure, and sometimes a guard will ask you for a certain amount of cat bells to let you pass. 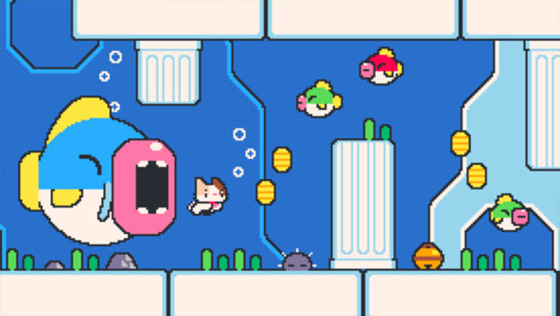 All the animals have nice animation and are always moving around, ad have different reactions according to what’s happening in the game. Like the monkey enemies that get scared when you get close, and get “X” eyes when you stun them. The backgrounds are a little simple, there aren’t many elements, and you’ll see big areas with a single color, but if fits the game style just right. Some platforms could’ve have used “patterns” like lines or spots to be a little more appealing, but the children coloring book style of Super Cat Tales fits the overal feeling of the game just fine.

Super Cat Bros is a perfect example of how to make a mobile platformer using the touch screen. There isn’t a virtual joystick or buttons to use, instead you use the two halves of the screen, so you won’t have the common problem of missing the tiny icon to touch since you can’t feel them. 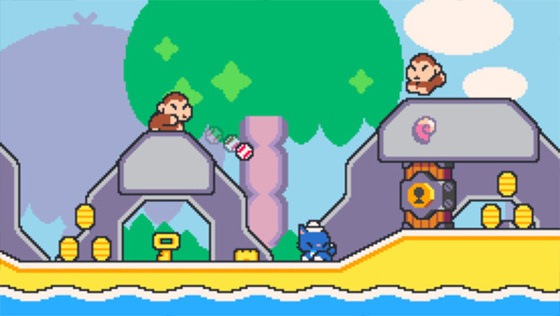 The gameplay is very easy to learn and get used to, and you’ll be running, climbing and swimming like it’s second nature pretty soon. You can just go for the level goal, but it’s fun exploring the level and finding all the secrets, like the hidden red coins among the golden ones that give you a cat bell if you collect them all. The music is made of chiptune tunes that will take you back to the Super Nintendo era, and all the cats meow different, the same way as the enemies sound different when they perform their actions. There are many things you can buy in the store, and once you get into the game, you’ll notice how complex it can get, but the whole game has simple controls that just use two sides of the screen and that’s it. It’s perfect for new players and experienced old school gamers.

Super Cat Bros y free on Google Play and the Apple App Store, you’ll see some banner advertising every few minutes, and you can choose to watch a video ad at the beginning of some levels to get a free helper if you don’t want to spend the golden coins collected in game. The no-ads version is worth $1.99, which seems reasonable if you really enjoy this title. You can buy premium version with everything unlocked for $4.99, but you can get everything just playing normally.

Super Cat Bros is a very enjoyable platformer made from the ground up for touch devices in mind. It may appear simple, but the gameplay is actually pretty deep. If you’re a fan of the genre, casual player, or just like cats, it’s worth cheking out and going over the 50 levels to play with lots of secrets to discover. Pros Cons