Play the world’s most hilarious INFINITE SLIDER today! Ever wanted to torture a small, helpless computer game character? Well now you can in 8-BIT WATERSLIDE! Take control of a screaming coward, TIPLER as he hurtles along this awesome pixel death slide.

8-Bit Waterslide is an infinite slider where you take control of a dude called “Tipler”, who thinks it’s a good idea to jump on pipes that have cracked wooden and glass sections, as well as deadly traps such as flamethrowers, lasers, acid guns and even a huge boot that hits you in the gonads. 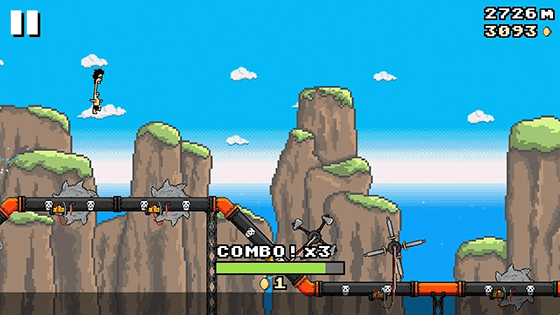 The objective of the game is to survive as long as possible avoiding the sharp swords, axes and saw machines, while collecting coins to buy power ups. Like a regular runner title, you advance automatically and only leap in the air or lie on your back to pass below some spinning blades. In order to jump, just tap on the bottom right part of the screen, and to lie down, press the bottom left side, and you’ll be flat on your back for as long as you keep your finger pressed. Besides those moves, if you press the lie down button while in the air, you can perform a powerful stomp, that can break the weak parts of the waterslide. This is useful to get into alternate paths and get to the torture traps. In the middle of the screen, you’ll see a combo meter, that goes up everytime you avoid a trap, but just barely. Like when you wait until the very last second to avoid a metal saw. You’ll notice when the time is right because you’re already by sliding on a black pipe with a skull on it. The combo multiplies the amount of coins you collect while you keep going at it, and once the green bar empties and the combo is done, you’ll get all those coins multiplied. But if you die in the middle of a combo, you’ll get nothing. Besides the things that cut you, you can touch yellow blocks with a “?” sign that have not deadly traps inside; this are only there for slaptick comedy, but they also add to your combo meter, and fill up another rainbow colored bar at the bottom of the screen. If you touch 4 non-lethal traps, you’ll get the Hyper Mega Boost Pipe, a bonus part of the level where you only worry about collecting coins for as long as it lasts. When you die, you’ll have to start over, and each time you play the track will be arranged completely different. Also, at 1500 meters, you’ll see new harder to avoid traps such as crossbows shooting arrows, and at 3000 meters you’ll start seeing powerful cannons blasting to obliterate you. So keep buying power ups if you plan to survive long enough to reach 5 km.

8-Bit Waterslide features bright an colorful graphics that remind of early 90’s console platformers such as Sonic the Hedgehog. The background is always the sea, the sky, and a few mountains with grass on top here and there, but a nice detail is that you can see the sunset and play at night, so the time passing as you keep playing is a good touch to keep things a little more interesting. 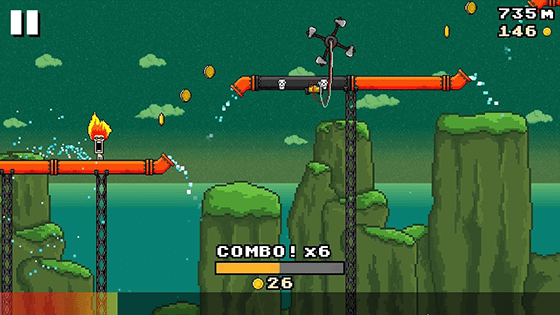 The best part of the game is the animation of Tipler, who has very funny reactions to everything it happens to him, and even if his look is kinda “blocky”, it’s greatly exaggerated so you can crearly see him yelling with a huge mouth and when you hit a torture trap there are very original animations to amuse you… At least the first dozen times you see him on fire/acid/kicked in the groin.

8-Bit Waterslide doesn’t really innovate the genre, there are a lot of runner titles available with exactly the same gameplay and even a similar visual style, but it tries to be different in the mood it sets, with cartoony ultra-violent over the top humor. 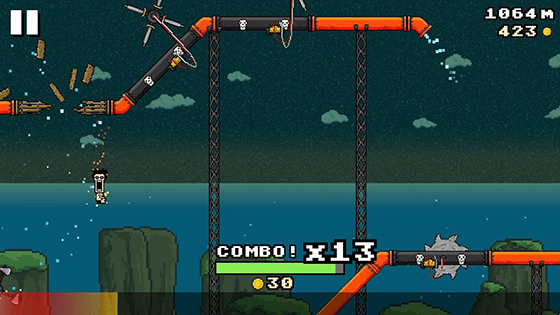 Tipler voice is funny, and there’s an announcer with a lot of catch phrases that wants to sound epic like the Movie Trailer Voice guy, and it sort of accomplishes it. The music is OK, an old school original chiptune like an arcade from the late 1980’s, and the sound effects are also kept “retro” to complete the package. Gameplay wise, it lacks extra challenges or achievements so it isn’t just trying to collect more coins or surviving longer each time you play, but that in itself will be amusing enough to give you several minutes of fun.

Value for your Money 83%

8-Bit Waterslide is worth $1.99 in the Apple App Store, which may seem reasonable, but there are many similar titles available for a dollar. The android version is free, but it has video ads, like you’d expect, and since you can die pretty soon in each playthrough, it can become annoying.

8-Bit Waterslideis an entertaining cartoony title that doesn’t take itself too seriously, and while the gameplay is something you’ve probably played before a hundred times, its unique theme is something not so commonly seen, and it may keep you busy for about half an hour trying to get at least half the power ups, because is always funny to see new traps for Tipler to fall in. Pros Cons