Snow Bros by Isac Entertainment is an upgraded version of the classic Arcade Game by Toalpan. Help the Snow Men brothers Nick & Tom save the world, by turning monsters into snow balls!

Snow Bros is essentially a platformer, since you walk around and jump on different floors, but the main gameplay mechanic is how you eliminate enemies. There’s a virtual joystick on the left side of the screen to move, and on the right side you have 2 buttons, one for jumping, and the attack button to throw little energy “bullets” that turn enemies into snow balls. Just one shot will start building the ball around an enemy and paralize him, you need to keep shooting to complete the snow ball, and then you can push it and make it roll, so it runs into other enemies. 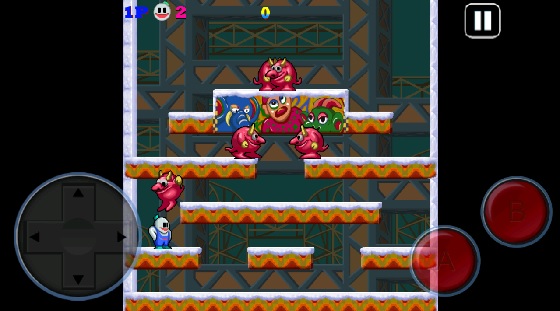 You can kill a monster either by turning it into a snow ball and throw it into wall, or by running them over with the ball. When that happens, the monsters fly around the stage and when they land and disappear they leave an item, such as food that gives you points, a power up, that can improve Walk Speed, Shot Power or increase the magic bullet throw distance. As a bonus, if you manage to eliminate all enemies in the screen with only a snow ball, making a “strike” like in bowling, giant yen bills will fall from the sky, and they give are worth lots of points, so be sure to try out to perform a strike in every level. Finally, sometimes an enemy will leave a Snow Brother face, when you take it, the screen will flash gray and 4 blue jelly-like monsters will fall down to the level. When you eliminate one of them, you get a letter, either S, N, O, or W, if you get them all and collect the four letters, you get an extra life.

The original Snow Bros was released in the Arcades back in 1990, and it’s 16-Bit graphics looked OK at the time, but they may look a little dark by today’s standard, specially considering that platformer mascot games are usually very colorful and feature great animation, specially in game coming out today. Still, Snow Bros look acceptable, and their original pixel graphics have been updated for a smooth look, but without taking away the much of it’s “retro” look, so it holds up today, but still has the old school feeling. 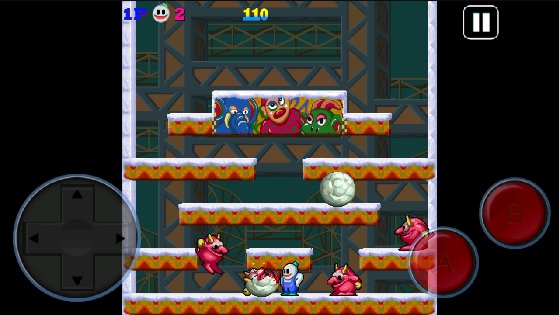 The Title Screen, Menus and World Map are new additions, and they look a little simple, and could have used more motion and details to be eye catchy. Also, the virtual controller on the lower part of the screen is pretty simplistic, just a gray D-pad and red buttons over black. Nothing to really complain about, but there are games such as Slayin’ that have custom artwork over the controller, so it would have been a nice feature.

Snow Bros for Android and iOS brings back the classic game with a little graphic upgrade, and that’s about it. While Retro Game fans will appreciate the effort in this port, there really isn’t nothing much. 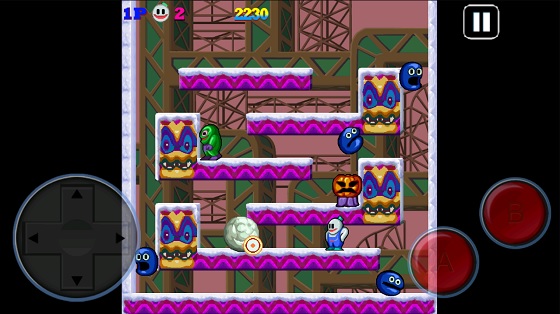 Just like the original game, it features 50 levels. You play the 9 regular Clear Screen floors full of monsters, and then there’s the Boss fight. Repeat the same formula 5 times. It may not look like much, but throwing snow balls for “strikes” it’s a unique twist to single screen platformers and created a lot of addicted gamers back in the day, and this gameplay formula still holds up today, so give it a try.

Snow Bros is valued $3.99 in the Apple App Store, and it may be a little overpriced compared to similar games available on iOS. Specially considering that there are meny free games in the same style, but there’s a Lite version you can try. People that spent dozens of quarters on this Arcade, may consider buying it just for the nostalgia, but the full price is not really recommended for new players. The game is free on Google Play, but you need to watch an ad to get more Credits, and that can get a little annoying. But if you’re good at the game, you won’t be bothered by that many ad videos and banners, so check it out.

Snow Bros made is comeback to Mobile devices, and while the full iOS version is a little overpriced and recommended just for fans, old and new players should download the free version to see why it got popular over 25 years ago. Make those Strikes! Pros Cons