Good Knight Story by Hot Chilli game is a Connect-3 Puzzle RPG adventure about a medieval armored warrior with no memory of what happened the night before. Join our unlikely hero as he awakens in a dungeon with a sore head and no memory of how he got there.

Good Knight Story is a Puzzle RPG where you battle monsters by lining up elements in a board. You have Ice, Fire, Poison and Thunder pieces in the grid, to attack, touch one of them, and drag your finger along all the close ones of the same element you can. If 3 or more are connected, once you lift your finger, the knight will attack. 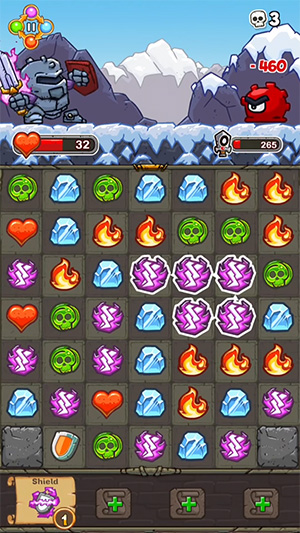 The monsters have a sword with a counter on them, when it reaches zero, they’ll attack you after finishing your move. To defend, connect shield in that turn. If you don’t defend and get hit, you’ll lose health, collect hearts to regain some life points. In most dungeons, the objective is to defeat a sequence of monsters, one by one, or maybe two at a time; once you beat ’em all, you’ll win the stage, earn coins and get experience to level up your attack power, defense or life points. Then you go to the world map to continue your adventure. Sometimes, the objective will be to collect keys or other items to escape a dungeon, in which case the monster will have infinite health, and you have to connect the pieces and make them disappear to make the special items get to the bottom of the board and collect the. Once you get 3, you’ll escape. There are also Special Attacks you can use at any time if you buy them, like a fire magic that makes a rain of fire damage all monsters, or a Magic Defense that will protect you for 3 turns. You can buy these Boosters with the coins you earn in your quest.

Good Knight Story features a cartoony 2D art style. The overall “feel” of the game is that of a funny flash animation, with the characters moving and reacting to attacks all bouncy and in a humorous way. 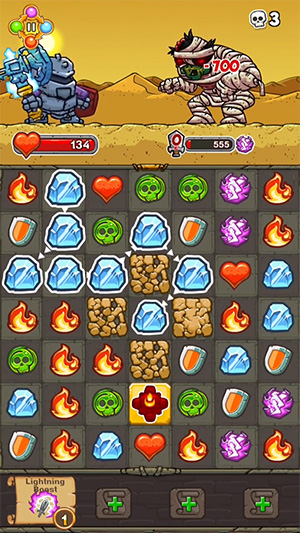 When you start connecting to charge up an attack, you’ll see the elements in the board get bigger and glow with a white outline, and the knight’s weapon will get that element magic power. All the attacks are well animated, and there are lots of enemies to encounter. The story is told by simple animation at first, and then by interactions with a narrator in battles or tavern owner in the world map. All characters are pretty detailed with shading and shadow effects in the design, the don’t look “plain” or “flat” like flash games with a similar visual style. There are many locations where to fight, castles, dungeons, caves, forests, the desert… And you can see the knight advancing in the top part of the screen after defeating a monster. The grid itself doesn’t change, and it’s just a checkerboard with light gray and dark gray squares.

There are other Puzzle RPG in the same style as Good Knight Story, but few of them have the funny and creative story writting this game offers. It’s very entertaining just to read the jokes they throw at you. 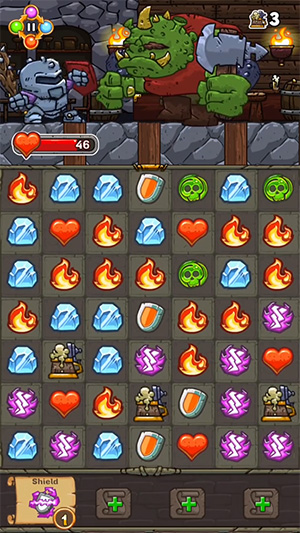 There are lots of enemies, scenarios, treasures and items to collect, and weapons to use. The level up system makes you want to go back to battles again and again, the music is pretty good and the story is actually worth reading. There are also achievements and the game is translated to 12 languages.

Good Knight Story is free on Google Play and the Apple App Store. You won’t see any advertising with just normal gameplay, but you can double up the coins you earn after you beat a level by watching a 30 seconds video ad, and if you die, you can revive with half your health by watching another game commercial. You can also purchase coins to by in-game items and level up your weapons using real money, but just collecting enough coins by going to battles won’t take you forever like other similar titles.

Good Knight Story is among the high quality Puzzle RPG you can find. It’s similar to the pixel art title Maid & Slime, but the story here is so much better and it’s fun going into taverns just to read the jokes. There’s room for improvement in some aspects, but as it is, you should definetely try it out if you enjoy connect 3 board games. Pros Cons