Clockmaker by Samfinaco is a Match-3 Puzzle game that takes place in a late XIX British town. Match colored jewels to solve the mystery in this realistic painting world.

Clockmaker is a casual Match-3 puzzle where you line up colored jewels to beat a stage. As usual in games of the genre, you touch a piece, and move your finger up, down, left or right to trade places, if 3 or more jewels of the same kind are lined up, they’ll disappear, if no match is made, they’ll return to their original spaces. 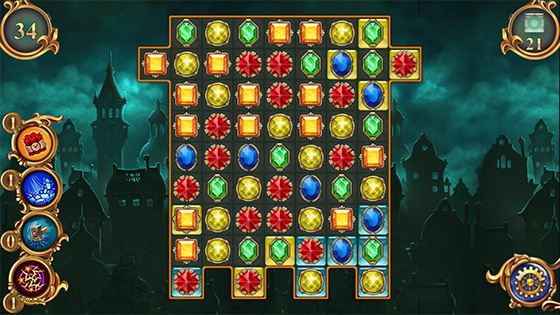 When you line up 4 or more jewels, you’ll get special bombs that can take out a whole column or row. If you manage to line up 5 jewels in a T or X shape, in a way that you’re making a 3-match horizontally and one vertically at the same time, you get bombs that explode affecting the surrounding spaces. The power ups you can use are a hammer that let’s you hit whichever space you want, a thunder that takes out all the jewels of the same kind, a bomb that explodes in a + shape and you can choose the center of the explosion, and magic spells that melts frozen spaces, that you find in later levels. The objective of each stage can be to collect a certain number of a specific jewel, clear golden spaces by making matches on them, or get rid of obstables by lining up jewels next to them. An original feature, is that you don’t unlock a new stage just by beating the previous one. To enter a new area, you need items that let you pass, and you win them by beating certain levels. So, one stage has 3 possible rewards when you beat it, and one of them may be the key to the latest level. If you earn it, you can continue, if not, you have to play the same level again in hopes to get the right key. The levels you’ve already completed will have a few changes, so as to not become too repetitive.

Clockmaker features a visual style that looks like realistic paintings, or maybe ilustrations in a late XIX century tale book. Everything is pretty detailed, and the grim choise of color may remind of classic mystery novels like Sherlock Holmes. 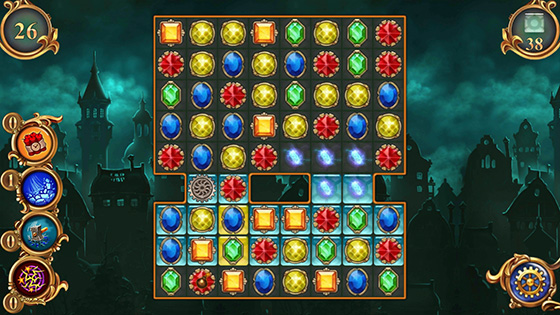 There isn’t much animation in the game, you just see the jewels disappear in a bolt of lighting; they don’t shine or seem to be “bouncy” like in other more lively games. Give the dark design and mysterious theme, it works out OK, but it could use some elements moving, like the clouds in the backgrounds could’ve been moving a little, or maybe light sources in some buildings… As it is now, completely static until a match is made, it looks kind of dull. When you win a stage, you suddenly get a win screen and then go to the world map. There’s not transition, or maybe a counter with your points or some cinematic showing what you won. It is a little boring how the screens you appear, and you only see character protraits in the menus. Still, the art featured is pretty good, just may not be of the taste of everyone.

There are thousands of Match-3 Puzzle games available now, and only a few of the great ones stand out, and Clockmaker, doesn’t really has anything truly ‘unique’ to be part of the not so common ones. 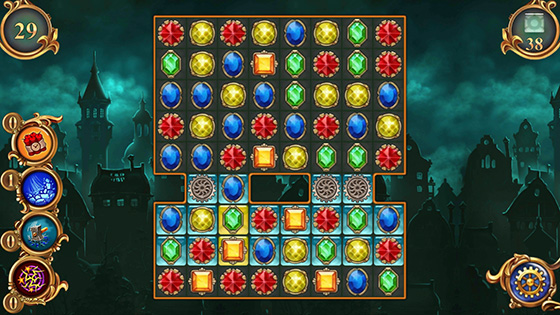 The gameplay is pretty generic, and it’s does not offer anything you haven’t played before. The music is forgettable and even this graphic style has been used by popular titles many times over. It has over 500 levels to play; some of them with a few twists so you go back to them, but if you’re fond of puzzles, you may want to play something else with a level up system, likeable characters, more lively look, animation or different challenges that the ones every single game of this genre has. Clockmaker just doesn’t have something to ‘hook you’ into playing more that 10 stages.

Clock Maker is free on Google Play, the Apple App Store and even Facebook. You won’t see any advertising, as this game earns money for the developers via in-app transactions. You won’t need to purchase anything at first, but later on when you play the same level 4 times and you don’t get the key you need for the latest stage, you may feel like you buying the item, and it seems to be a common ocurrence in later levels.

Clockmaker is a casual Match-3 puzzle game like many more you surely have played before. The controls work fine, and the realistic art style is well done, but gameplay wise it just doesn’t offer anything original, and overall just feels generic. If you’re a fan of puzzles and must try every game of the genre that’s “OK”, check it out, if not, there are better options out there. Pros Cons