Join Sonic, his friends and a bunch of classic Sega characters in an incredible race by land, air and water!

As any Racing Game, the objective is to reach the goal first, or at least get to 2nd or 3rd Place. Controlling the vehicle is pretty simple, it automatically accelerates and you only need to steer the wheel. There’s a virtual joytick in the bottom-left corner, and it works perfectly. Many mobile games don’t have a very responsive joystick, but here, no complains at all. It takes a while to get used to if you played the Console version of All-Stars Racing, but after a couple of courses you’ll have no problem. 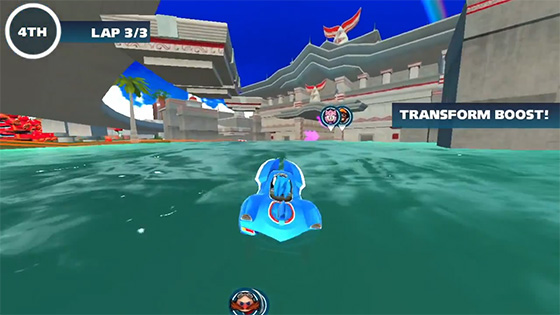 You can also drift in corners using a button on the bottom-right corner of the screen. Just turn to a side and touch it to start drifting. While doing so, the vehicle starts building up Turbo, which gives you a Boost when you release the button. The secret of the game is to master the drifting techniques and use them whenever possible. You can add up to 3 Levels of Turbo for a Super Boost. Like in ‘Mario Kart’, you can collect power ups and weapons along the road which can be activated with a button just above the Drift Button. You can get Rockets and Ice Missiles to attack your oponents, or use traps such as a swarm of giant hornets or blowfish. There’s also a glove Remote Control Car-Bomb that follows the racer in front of you and explodes when it hits, a twister that make a car confused so when you press left on the joystick you turn right, and a huge motor that gives a vehicle quite speed, but explodes when overloaded. Finally there’s a power up called ‘All Star’, which makes your character invincible and really fast for a while, depending on the character, it gets a Special unique attack based on the original game where it comes from.

Sonic & All-Stars Racing is originally a Console game, and the mobile version is a downgrade of those versions. While the game looks great in a Gaming PC or current generation console, the iOS version looks a little dated, like an average PS2 looking title. Even in the App Store you can find 3D games that look way better overall; also, there are some dropped frames here and there when the action is heavy. 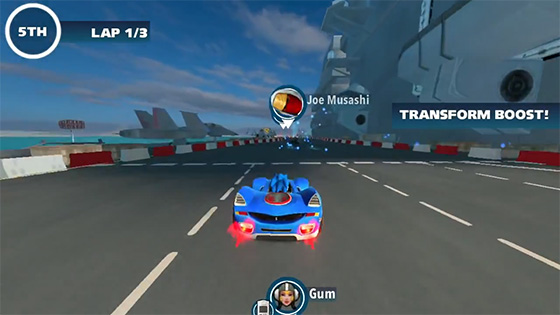 Taking all into consideration, the game still looks pretty good, with bright and colorful graphics, and characters have many animations and dialogs. The may stand up or clap when getting into first place, get dizzy and move their heads around when crashed, and they do stuff from their original games from time to time, like the ninja Joe Musashi from ‘Shinobi’ who takes on a fighting pose and throws a kick, or Sonic who jumps around spinning in ‘All Star’ mode. The ‘transformed’ part of the game’s title comes from the ability to turn your vehicle into a plane to fly or a boat to travel in water. The water looks really cool, with nicely animated waves and lighting effects reflecting the sun rays. The vehicles also show some reflection on them, such as Sonic’s blue car reflecting a white light when coming close to a concrete wall.

There are many tracks, characters, items and challenges to discover. Sega did managed to bring to the mobile version most of the original console version content. The music and dialogs are all there, the gameplay is kept simple yet really fun, and while it may lack the dept of the Adventure and World Tour mode found on the consoles, there’s still much to do here, and it should keep you entertained for quite a while trying to beat all the Challenges and Cups. 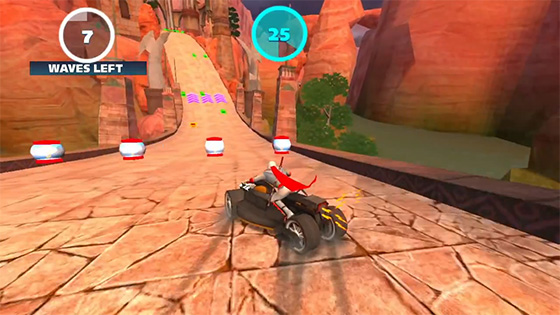 There’s also an OnLine mode for Multiplayer, and you can record gameplays and send them to your friends. As a bonus, there are daily challenges to keep you getting back for more even after winning all events. Overall, is a great free game you should try out if you want a decent racing game on mobile, and haven’t gotten one Console, PC or 3DS/Vita versions.

Sonic & All-Stars Racing Transformed is free to download, but you can buy the ad-free version for just 99 cents. There are also many packages you can get, such as the VIP version which unlocks 10 characters for $5 or the Premium that gives you even more characters and content for $10. You may want to make a transaction only to get rid of the advertising, which shows up after each race, but in reality, unlocking characters, tracks and everything else, takes just as much time as in the Console versions. And that’s part of the fun.

Sonic & All-Stars Racing Transformed is a great option for racing game players on the go. It is not as good as the original console version, with its shorter tracks and just 2 laps per race, but it’s an excellent port for iOS and Android that kept most of the content, and you should check it out if you feel like playing ‘Mario Kart’ with Sega characters. Pros Cons