Sonic Dash 2: Sonic Boom by Sega is an Infinite Runner with platformer elements based on the Blue SuperSpeedy Hedgehog latest game. Great graphics, perfect motion controls and lots of content make for one of the best free Apps of this kind out there.

Sonic Dash 2 is an endless runner featuring Sega mascot “Sonic The Hedgehog” and his friends. The game play is simple, the blue hero will run automatically, and the player can only control actions such as jumping or rolling with touch screen motions. In order to perform a jump, you touch anywhere on the screen and swipe up, you can collect rings and attack enemies this way. In order to perform a roll dash, you swipe down, and this makes Sonic able to pass below some obstacles. 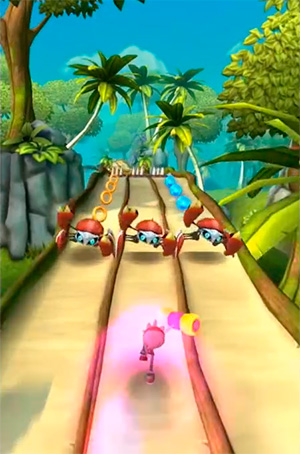 Common dangers are spikes on the floor, fallen trees in the forest levels, and the “badniks”, robotic bad guys made by Sonic’s archnenemy. You can also change rails by swipping left or right (even when jumping or rolling), and finally you have the “Sonic Dash”, when you fill an Energy Bar and tap the screen twice, Sonic will become invincible and start running at full speed. Along the way you can collect rings, that serve as Sonic’s life, and as in-game currency to unlock characters and other featurres. Just like in the classic Sonic games in the Genesis, Sonic can take damage as long as he has rings with him. When he gets hit, he’ll lose all rings, and then he’s vulnerable, in the next attack, game over. In order to start saving rings to buy items and the like at the game’s store, every once in a while there’s a check point, a detour you can take where you’re rings will go to your “bank account”, and you can also change character here. Enemies are usually robot crabs you can jump or attack by rolling, giant hornets flying around you can pass running below them or hit with a roll jump, and Dr. Eggman, who shoots steel balls at you, but some of them you can hit and send back with a rolling attack. The objective of the main game is to reach the end of the level, travel a certain distance, or defeat Dr. Eggman, depending on the level.

Sonic Dash 2 looks great on mobile devices. The 3D models are based on the latest game in the series “Sonic Boom”, and even if they were a little downgraded, still look smooth, colorful and are nicely animated. The look overall is kinda cartoony, even the bad guys are round and “cutey”, appealing to a young audience. 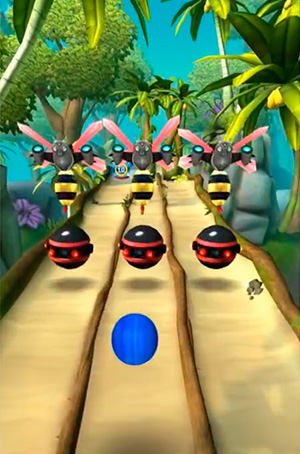 The game runs at a steady framerate and the action is no-stop, even in the “Sonic Dash” state where your character runs really fast and everything has motion blur added for a “Speed” effect. The are also many explosions, flashes and other special effects when attacking enemies, collecting coins and power ups, griding on steel pipes, using Amy’s hammer and much more. Sonic Dash 2 certainly looks better than its predecessor, and it’s on par with the 3D Mobile Games made by big AAA companies nowadays.

As expected from Sega’s mascot, Sonic Dash 2 is packed with content and it’ll take a while to get all characters and beat all individual challenges. As Infinite Runners go, this is one of the best out there, and it does a great job at adapting Sega’s classic franchise in a mobile title. 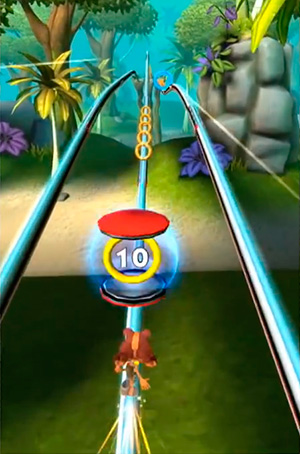 The motion controls work perfectly, and you’ll have no trouble cruisin’ through the levels. There’s quite a challenge in later levels for more experience players, but starting out, Sonic Dash 2 is a perfect family friendly App that really stands out from mobile games from the same genre.

Sonic Dash 2: Sonic Boom is free on Google Play and the App Store. You won’t see any video advertising or ‘click here’ banners, but the game has in-app transactions, and you’ll see some offers from the in-game store after you lose or beat a level. It’ll take quite a while to unlock every feature without expending some real money, but the game is pretty enjoyable without maling a purchase.

Sonic Dash 2: Sonic Boom is one of the best free Infinite Runners out there. The way Sega’s mascot universe was adapted to a mobile device is great, and you should try it out even if you’re not a Sonic fan. Is more appealing to young kids, but even seasoned Genesis gamers should have a fun time for a while. Pros Cons