Kick the arcade action into top gear as you dodge enemies, fling bombs and grab the treasure – before making a mad dash for the exit. Do you have the skill to find the secret levels? Can you use all the different the power ups to dominate the environment?

Dyna Bomb is an action platformer about exploring levels by walking around and flying with your jetpack to find the exit, while collecting gems to buy power ups and stars to boost your score. 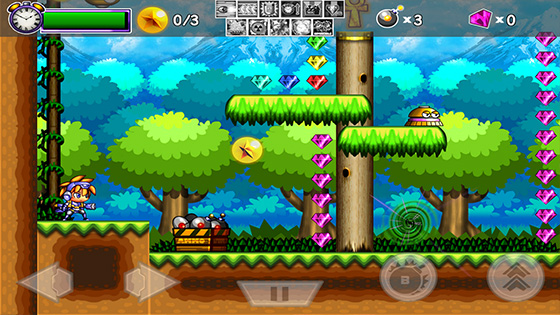 On the bottom left side of the screen you have arrow buttons to walk to the sides, and on the right side there’s a button to throw a bomb to blast enemies, and an up arrow to use your jetpack. Unlike many similar games, you can use your jetpack indefinitely, so you can fly as long as you want. You start each level with only 3 bombs at your disposal, but you can collect more, and there’s a power up you can buy in the game’s store that gives you twice the amount a box of bombs normally gets you, so while it’s not necesary to collect gems on the levels, it’s a good idea to buy power ups. When you throw a bomb, you use your arm and they don’t get very far, there’s a power up to make them long range missiles. In the top left side of the screen, you’ll see the timer, you must find the exit before the bar gets depleted, so hurry up. You can also buy a speed boost and extra time, and a shield that let’s you take a hit. Normally you die just by getting hit once by an enemy or enviromental hazard, like an electric zap. At the beginning, the levels will be small and you’ll be able to explore them completely just walking around and using your jetpack a little bit, but soon you’ll find portals that teleport you to different sections of the levels, so you can use switches to de-activate electric force fields and similar barriers. There are 64 levels, and they only get more complex as you advance.

Dyna Bomb features a 2D ahnd-drawn visual style that looks like a flash based web game. The animation is simple, and most enemies just mode to the sides but without having a different frame of animation. 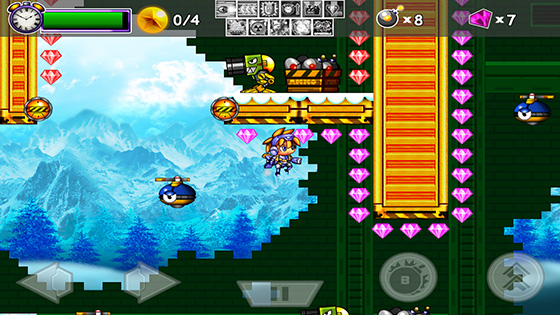 There are 2 heroes to choose from, but they look like just a color swap and play the same way. You only see them in stance, walking and using jetpack position, and not much else. The explosions look OK, but nothing fancy. The levels have an interactive foreground layer, and the camera follows you so you can see how all elements move with you, but the background layer is completely static, and that looks a little weird, specially since videogames have been using multi layer parallax scrolling since decades ago. Overall, Dyna Bomb seems maybe a little above average, but it isn’t that detailed or well animated, and it just doesn’t have something truly noteworthy. Also, since the gameplay is kind of slow paced, it’s pretty forgettable; unlike Wild Runner Adventure, that looks like an Anime production.

Dyna Bomb has 8 worlds, each one with 8 missions to play, and there’s a hidden level on each world, each one with increasing difficulty, so it’ll take a while to finish. 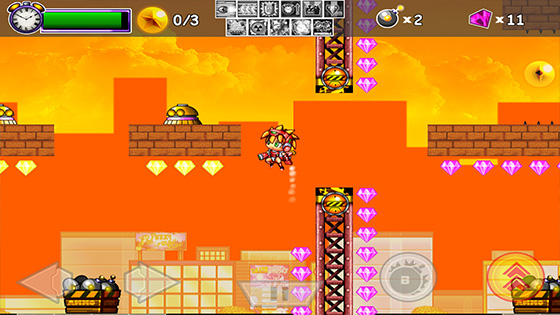 Gameplay wise, it’s kinda simple and the pasing is slow-ish, so while it may keep you entertained while you’re learning all the game’s dynamics and discovering power ups, after a while exploring and collecting gems gets boring. As a platformer, it’s just not very exciting, the graphics and animation aren’t that good and the music is nothing memorable. For people that enjoy similar titles, it may be recommendable to try for a while, but very few players may want to play all 64 levels, or collect everything to unlock the hidden ones.

Dyna Bomb is free on Google Play and the Apple App Store. You’ll see a few ads, but that’s to be expected, and you can also buy power ups with real money, like in any other mobile title. This game has a PC version worth $4.99, so since you can play it for free on your mobile device, it’s worth trying out wihout spending a dime.

Dyna Bomb is your average platformer adventure with some puzzle elements. Overall the game is just average and it may keep your attention for only about 5 levels or so. Once you try out some power ups and see all you can do in the game, it becomes repetitive and it isn’t really exciting or anything. It’s meant for casual players that like collecting all gems and secrets in levels, so if you want a slow-paced game about exploring with a jetpack and occasionally throwing a bomb, go ahead and try it, at least it won’t cost you 5 dollars like the PC version. Pros Cons