Prepare to fall in love with the sweetest worms of all time in this one-of-a kind line-matching game! Step in this colorful world full of surprising puzzles and lovely characters! Join the playful worms on their way to the next exciting puzzle adventure!

Sugar Worms – Sweetest Line is a connect-3 puzzle game where you draw lines over colored cartoon worms close to each other to make them disappear in a flash of light. Just Touch a worm to start, and then you’ll only be able to move to another worm of the same color that is close to it; drag your finger to connect all the ones you can, and when you release your finger, they’ll disappear, and new sugar worms will take their place. 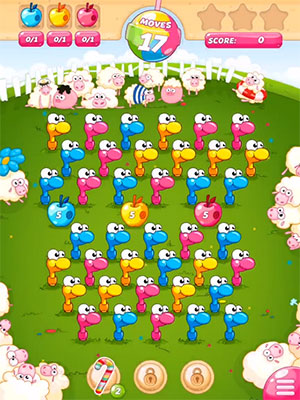 At first the objective of the level will be to reach a certain score. You earn points depending on how many worms you connect before making them disappear. You’ll earn more than twice as much points with a 6-match than just matching 3. Later on you’ll find apples in the stage, that will need to be connected to a certain number of worms so you can get rid of them. After that, you’ll find 4 colored lollipops that will be in the same space, and you’re gonna need to connect them to all 4 colors of worms, 1 on each turn to collect them. There are also worms with a golden padlocks that you can’t connect until you make a match next to them so they’re free to use. After a while, levels will have a combination of all this special worms and elements on spaces. There are power ups you can use like a Super Worm, a glowing one that when used in a match gets rid of a whole row, horizontally or vertically. You can buy a Super Worm as a booster before starting a level, or get when by making a 6-line. You get two Super Worms when creating a 12 line, 3 with 18 and so on. Another power up is a candy stick that let’s you get rid of anything on the space you want, and finally there’s a thunder that eliminates all worms of the same color. Before starting a level, you can also buy 3 extra turns with the coins you collect just by playing. Every day you get some kind of bonus like coins to buy boosters, or by beating stages, you’ll reach treasure chests in the world map, that will have items to make your sweet adventure a little easier.

Sugar Worms features colorfull hand-drawn 2D graphics. The characters have a cartoony style, like out of a children’s book, and the worms are animated nicely; but not the sheep, pigs and other animals on the background, they do not move at all. 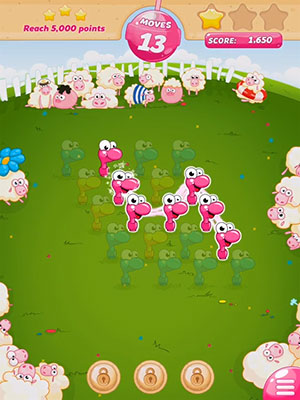 When you start drawing a line, the worms that can be connected together will be highlighted and the rest will fade away a little. When you touch a new worm, it’ll shine and get golden sparkles around, and the lines you see is made of a glowing beam of a tint of they color. Also, you can see their expression change, and all the other worms looking at the line being made. When they disappear, you’ll see a golden tiny explosion and if it was a big line, you’ll see text appear like “Wormstastic” and “Wormdenful”, which is common to see in this kind of games. The background don’t look as nice, they’re pretty static and there’s not much variety, but you will see some small, medium and big maps, and the farm animals around arranged in new ways; but they could have done a better job with the scenery.

Sugar Worms has nice gameplay and the worm characters look and sound pretty good, but it’s much too similar to many other connect-3 puzzle games, and while it has decent quality overall, it’s really an average title, specially compared to the popular match-3 franchises. 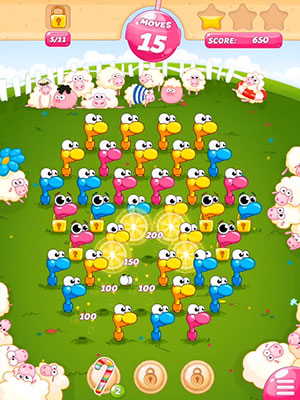 There are 240 levels to play, but after just a dozen they all start feeling the same. The items and power ups are nothing you haven’t seen before, and overall this game does not stand out among its genre. It’s an OK choice if you want to try a connect-3 title, but there are better ones, like Blossom Saga.

Sugar Worms is free on iTunes and Facebook. You won’t see any advertising unless you want to earn some extra coins after beating a level, so your gameplay experience won’t be interrupted. There are in-app transactions to get coins and be able to buy boosters and extra turns, but a good player won’t need to do that.

Sugar Worms: Sweetest Line Puzzle has everything you’d expect from a game of its kind. The gameplay is simple and fun for those who enjoy connecting elements on a grid, and the worms themselves have a nice look and personality; but overall, the game feels pretty average, and it feels like any other title of the same genre you’d played before; and you can tell that there are much better ones with more original content. Anyway, it’s free, and it’s not a bad game to spend a few minutes on, so go check it out for yourself. Pros Cons