Clear the orange pegs as you rack up bonus points, and hit style shots that’ll make you smile for weeks. Learn from Peggle Masters and harness their powers to score big in peg-popping challenges.

Peggle Blast is a game inspired by pachinko, where you shoot a ball from the top of the screen and make it bounce around blue and orange pegs until it hits the bottom, then you shoot another one until you hit all orange pegs or run out of balls. Just aim the cannon by draggin your finger left and right, and tap to shoot. 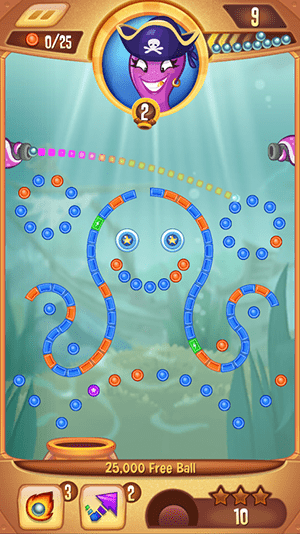 The objective of the game is to reach a certain score. Even if you hit all orange pegs, if you don’t reach the requiered points, you have to start over. The are also stages where you need to hatch phoenix eggs by hitting them 3 times, or boss fights where you need to score more points than your rival. There are special green pegs that activate your character’s power up. The unicorn Bjron let’s you see how the ball will bounce, extending the cannon visible trayectory. The beaver gives you 3 nuts that act as multiple balls, the octopus makes 2 extras cannons appear on the sides, that can catch balls to shoot them again, and there’s a bird that makes feathers appear where the ball bounces off, affecting the surrounding pegs. The violet pegs give you extra points, and there are many ways to boost your score. If you make the ball bounce off an orange peg and hit another one far away, you get extra points for “long bounce”, and if you hit the ball on the side wall and then land on an orange peg, you also earn more points. In some levels, the pegs form shapes and slides, and by making the ball roll over them like a roller coaster, you can earn lots of points. On the bottom of the stage, there’s a pot that when a ball falls in, it gives you another one. And you can also get another free ball by earning 25,000 points, and a 2nd one at 75,000. Once you clear all the orange pegs, some poles with a sphere on top appear on the lower art of the screen. If you hit them all, the word “Blast” is written, and you win 100,000 points. You can also buy boosters to use before the start of the level, like a fire ball that affects all pegs surrounding its hot aura, perfect aim with a long shown trajectory, 3 extra balls and 3 extra green pegs.

Peggle Blasts features great 2D hand drawn graphics, with funny cartoon animal characters which are very expressive and you can see them reacting to what’s happening on the screen on the circle in the middle. 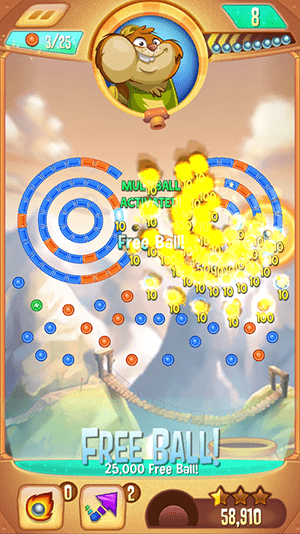 Depending on your location on the world map, you’ll see a different background stage. The beaver is in a forest, the octopus under the sea, the unicorn in a medieval fantasy land and so on. Is cool to see them get worried when you’re running out of balls and there are still many orange pegs left, and how they celebrate when you win. There are flashy visual effects when the balls hit something, and when you make a special bounce you can see tiny explosions and other nice effects. You can also see a point counter and words appearing when you make a great play, like “Awesome” and “Keep it Up” Between stages you can also see tutorials and characters talking to each other, like in a comic book. They’re not animated outside the stage protrait, but still look pretty detailed and are very well designed, like cereal mascots.

There are many games with similar ball bouncing mechanics, but don’t offer the dept of Peggle Blast. Here every few stages you get to play with a different character in a new setting, and there’s enough variety in level objectives to keep things fresh. The game also has achievements and weekly challenges, to make you comeback for more. 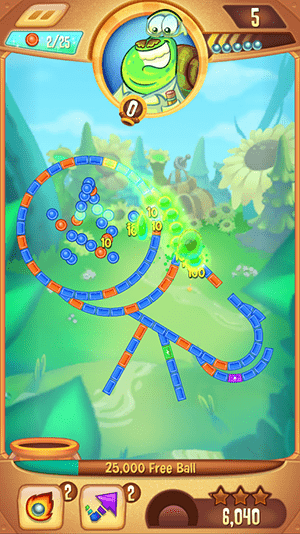 The music is nice and fits the game, but a really nice touch is when you’re about to hit the last orange peg, the whole game slows down and it zooms in on the ball, and if you get it right, classical music sounds and you shoot out all the remaining balls for a super extra bonus score. Levels get quite hard without the use of power ups by the end of World 3, but this is a title with such a high quality level that you’d want to play until you run out of lives, and then wait until you get a new one to keep going.

Peggle Blast is free on Google Play and the Apple App Store. You won’t see any advertising, but you’ll take forever to get power ups just by playing, and by World 4 some stages seem almost impossible to beat without buying boosters or extra turns through in-app transactions.

Peggle Blast is a very interesting title with funny cartoon characters that will have you bouncing around balls for hours. Even though you don’t really interact that much gameplay wise, it’s fun seeing what happens everytime you shoot, and you’ll be trying to beat that hard stage over and over again because you just can’t get enough of this peggle adventure. If you already have enough of match-3 puzzles and infinite runners, definetely play this one. Pros Cons