Pop the Lock by Simple Machine is a minimalistic casual game with simple tap controls, that will test your reflexes to the max! Become the faster locksmith in this padlock adventure.

Pop the Lock is a simple but strangely addictive game that will test your reflexes and timing making you open several padlocks in a row at blazing speeds. 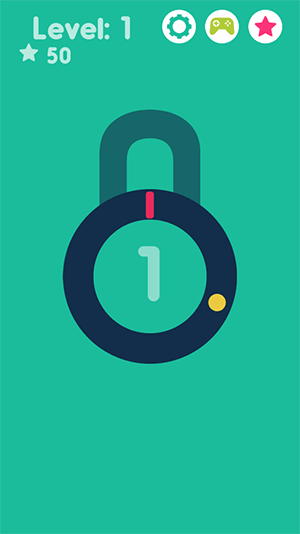 To open the lock, you only have to tap on the screen once the red line in the middle of the circle gets right on top of the yellow dot. In level 2, another yellow dot will appear, and the red line will change direction to pass over it. Just tap again to win the level, and on the next one, the line will go backwards one more time and so on. If you miss the yellow dot, the background will turn red and you’ll start over. In later levels, you may miss the dot, and a text will appear asking if you want to watch a video ad to continue where you lost, so you don’t have to do all the unlocking again from the beginning. Some yellow dots have a star symbol on them, and when you tap over those, you earn star coins to buy hats, which are ornaments on top of the circle. They don’t change the gameplay or anything, but it’s a nice touch, and even if you lose the level, you still get to keep the starts earned. Besides just playing the regular game, there’s an endless mode where you have to beat every level in a row, and when you lose, you start over from level 1.

Pop the Lock features a dark circle over a blue background with a clear number in the center, and the only elements you see at first are the red line moving around and yellow dots popping out, that’s it. 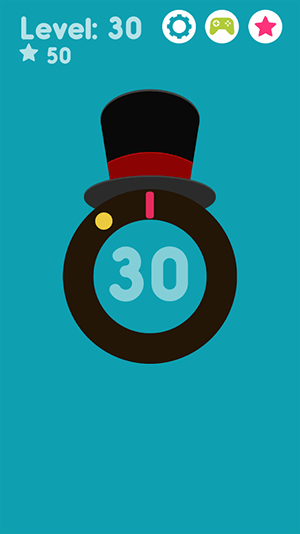 The only animation you see, is that the background changes color gradually every 10 levels; also, when you get a new hat, confetti pops out from within the circle, which looks really nice, but is not going to make you want to keep buying hats just to see that. The hats you get aren’t animated, and most of them don’t even look that detailed, but there are some that are amusing when you first see them, at least for a few seconds before you want to change them.

Pop the Lock keeps things simple, and there really isn’t much to do besides the gameplay. There are achievements, but they’re not something extra or different from regular gameplay, since “Reaching Level 10”, is something you’re still going to do. 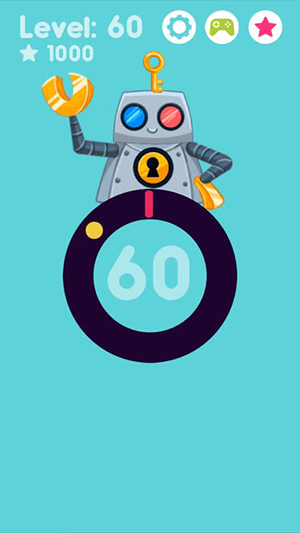 The isn’t any music, and the sound effects are nothing out of this world, and while some of the hats have cool designs, few players will bother trying to get all star dots they can to buy them all.

Pop the Lock is free on Google Play and the Apple App Store. You won’t see any advertising unless you want to, in order to continue from where you lost on a level, or want to earn 70 stars, so your gameplay experience will never be affected if you don’t care about start collecting and are winning every level without much trouble.

Pop the Lock is a perfect casual game that doesn’t offer much besides the core reflex testing gameplay. While it starts easy, it won’t take long before you start missing your 15 unlocks in a row, and is so addictive that you will try to beat the same level several times given the simple and enjoyable tap control that anybody can play whenever there’s time for a quick locksmith test. Check it out if you want a casual but challenging app and don’t care about graphics or music. Pros Cons