Smove by Simple Machine is a casual game based on swiping your fingers to the four directions collecting cubes and avoiding black balls. Push your reflexes and index finger speed to the limit or you will lose before getting 30 points.

Smove features simple touch controls meant for casual mobile players. You take control of a white circle in the middle of a board divided in 9 spaces, like a Tic Tac Toe. You objective is to collect blue or yellow cubes that appear in one of the squares, while avoiding the black circles that come from outside the screen. To move the white ball one square, you just swipe up, down, left or right. 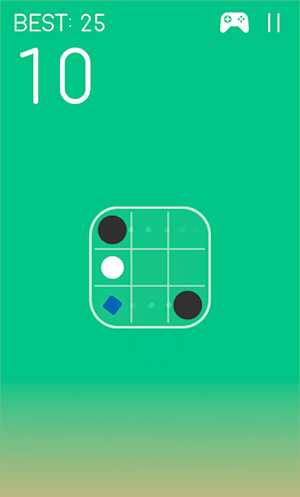 Each playthrough is divided in Levels. At first, you’ll only have 2 black circles at the time trying to touch you, by the time you get a 10 score, the background color will change and you’ll get to level 2, where 4 black circles can appear at the same time. By level 3, the game’s speed will be faster, and at times 2 balls can come from the same side, but with different speed, making it difficult to plan ahead where to put your white ball. Smove is an infinite level and you just play to break your HighScore, but by 20 points the game is pretty challenging and can get very addictive for players that enjoy to test their reflexes in this style of gameplay.

Smove features simple game elements over a color gradient. Nothing fancy, but it fits the game and it works for the type of players it’s meant. There’s a white grid in the middle, the board has smooth corners, there’s the white circle you move, the spinning cube you have to get, and the black circles that appear from all 4 directions, which leave a trace of white fading circles when the move. 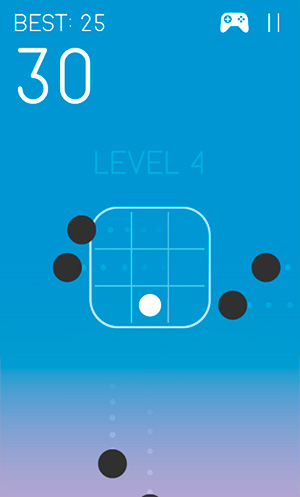 The background is just a color with gradient, which changes every level. At least it keeps things a little more interesting that some similar games that only have a blank gray screen. Finally, the score counter has a little transparency effect when it ads a point, small detail, but it does look better than just replacing the number. Overall, pretty simplistic, but nothing to complain about, since for a mobile casual game of this style, it just fits.

Smove features an infinite level, and your interaction with the game is just swipping to move a ball in 4 directions. You only hear one sound effect and the music is quite plain. It lacks characters, story and all that elements that “draw you into” a game, but where it shines, it’s in its addictive gameplay. 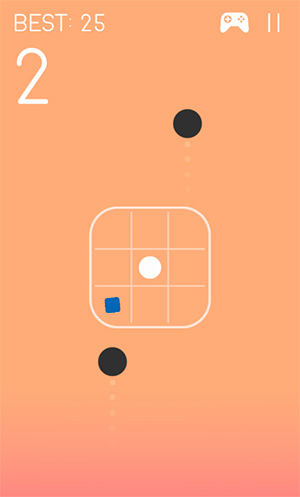 Most users may play the game for a while, just until they get to a desired record like 50 or so, and then look for something else. It should be said that it’s a fun app while it lasts, but that’s about it, it’s not really memorable, and you may not recommend it since it doesn’t stand out that much among similar titles.

Smove is free to download on Google Play and the App Store, but the ad-free version is worth $1.99, which it’s kind of expensive, similar paid apps like this one are worth just a dollar. The game’s advertising consists in a banner that’s always at the bottom of the screen, not really intrusive, and a banner that appears when you lose, which it isn’t very often since a playthrough can last quite a while (if you’re good) so you can try it out and enjoy the game fully without spending a dime.

Smove is a simple casual app that accomplish the goal of a videogame, to entertain. It can get pretty addictive and you’ll be trying to beat your previous record for a while, but after a few minutes, it just doesn’t offer something to keep you going. But still, if you enjoy this kind of games, it’s worth checking out. Pros Cons