Tetris Blitz by Electronic Arts is the classic addictive puzzle game everybody loves brought to the new generation with an awesome visual style and perfect touch controls. Check out the Power Ups and ‘FRENZY’ Mode.

The game is the classic 80’s Tetris with improved graphics and touch screen controls. The objective is simple, pile up figures composed of 4 squares, called “tetromino”, in a 10 blocks wide grid. When you create a line, it will disappear, making the blocks on the upper lines fall down. The tetromino to place appears in the upper part of the screen, you can touch the ‘cycle’ icon in the left part of the screen to rotate it 90 degrees clockwise, and then just touch the part of the grid where you want it to fall down. You can also tap on the figure and drag it to the sides. 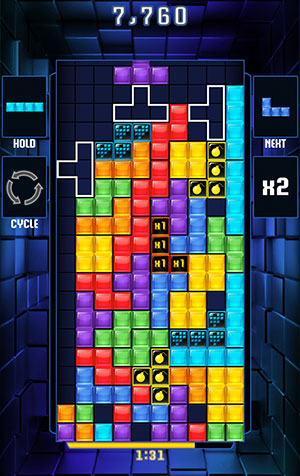 The objective of the game is to get the highest score possible in a ‘two minute blitz’. It’s a battle against the clock to reach a certain amount of points. Each level will challenge you to earn more points than a CPU player, and to do so you have power ups at your disposal, they’re special blocks that when included in a line, trigger a special effect. There’s the ‘Laser’ that erases 4 lines, the bomb that makes a certain area disappear, and the magnet that drags all squares to the left side, making it really easy to make a line with the next “S” or “L” figure. One of the best features of the game, it’s “Franzy Mode”. Each time you make a line, the frenzy bar will begin filling, if you make many lines in a row, you’ll trigger this mode, and special squares will start appearing from the bottom of the grid. There will be 9 squares per row, making it really easy to create lines and earn points. Finally, when the time is up, you have “Finishers”, a Power Up that’s used at the end of the play that can help you earn extra points, such as the “Mino Rain”, where individual squares fall down, and can create some more lines to finish up the game.

Tetris Blitz looks great. Even if it is the basic grid with figures made up of 4 squares, it has so much color and added lighting effects for a modern “neon style” look. The squares have smooth gradients and fading effects, giving it an appealing visual style, and the power ups have icons that clearly show what they do, even if it is just a tiny square, you’ll quickly notice the hourglass, 1X multiplier or magnet, and the effects of each one of them is a feast of animations such as explotions, fading/transparency effects, shining figures and screen flashes. It may not be recommended for photosensitive people. 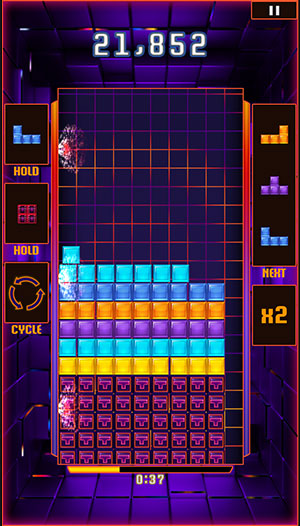 The screen looks nice. The background is made up of cubes arranged to give a visual feel of 3D dept, with a circular dark blue gradient effect, not taking any attention from the main gameplay, creating an elegant aesthetic fitting for a modern puzzle. Once in “Blitz Mode”, the background changes to a Purple tone, with the lines between the squares flashing with red lights going up in the background, and the tetrominos shining in yellow. It’s visually enjoyable to watch, kind of like look at Las Vegas neon signs.

Overall, even if it is the basic old school Tetris  formula, the Touch Screen controls and Power Ups give it a fresh look, totally worth playing for retro Tetris fans and casual gamers just looking to pass time with a fun puzzle. 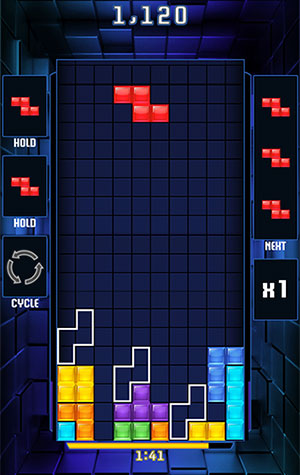 EA made a great job of adapting this classic portable game to the new generation. The classic gameplay is as addictive as ever, the visual look is just what a modern square/geometry based puzzle should look like, and the touch controls are perfect. It may have been a good idea to have “Endless Tetris” like in the original GameBoy title, but the pick-up-and-play formula of “2 Minute Blitz” make it a great choice for casual gamers just looking for a quick entertainment. You may find yourself going for just another “Blitz” more times than you thought at first…

The game is completely free to download on Google Play and the Apple App Store. You should just download it and try it out for yourself right now. Fans of the original game where you had a D-Pad and buttons to rotate may not like it much at first, but give it a chance, after a couple of plays, you’ll get hooked.

Tetriz Blitz brings the classic game we all know to the new generation. It’s visually appealing, the touch controls work perfect and the power ups give it the much needed fresh take on the good old puzzle gameplay formula. Check it out. Pros Cons