Geometry Dash is back with a brand new adventure! New levels, new music, new monsters, new everything! Discover the lands, play online levels and find the secrets hidden within the World of Geometry Dash!

Geometry Dash is a series of rhythm based runner platformers where the square character is always moving to the right side automatically and you just tap on the screen to jump. 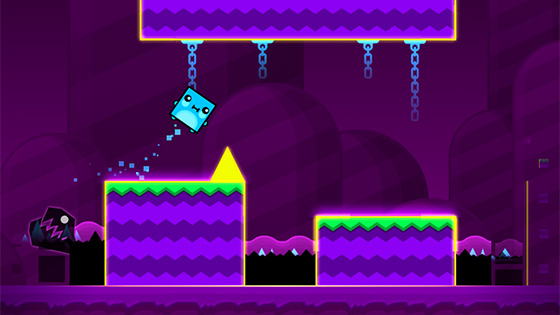 As you advance, you’ll find yellow trampolines that make you go up in the air twice as high as a normal jump, and sometimes you have to avoid them since there’ll be spikes in the ceiling, or making a giant leap will make you fall down on lava. In the later stages, you’ll find magic circles that let you perform a mid-air jump if you tap the screen while passing through them, and most ofthe time you’ll have to use them to survive, or maybe reach a higher platform to get an item. Besides the normal platforming, in some sections you’ll enter a portal and get a plane to fly around. In this mode, you touch the screen to go up, and when you lift your finger the plane will start coming down; the timing here is crucial to get to the end of each level. The stages are short compared to previews entries of the series. When you beat one, you get a star rank depending on your tries, number of jumps and time it took you to complete the course, then you can go to the world map to play the next stage. You also unlock characters or new colors for the ones you already have.

Geometry Dash World features 2D hand-drawn graphics with a neon look, and the elements in the levels seem to bounce and change size according to the beat, it looks like a disco party. 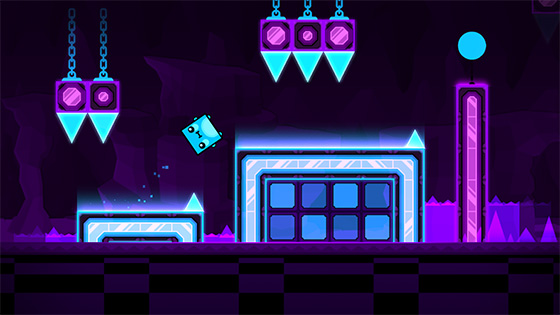 The backgrounds are dark, but you can notice the patterns in the platforms at the back, and the glowing foreground objects have nice visuals. This time around, besides the square shapes, you have more lively characters with faces and funny cartoony expressions, which look better than the prequels. Your character leaves a fading trail of colored neon sparkles, and there are arrows and other visual cues to tell you where to go, which platform to take and other actions to perform. Overall, there’s an improvement in the graphics of the previous titles, and the nice animation that goes according to each song is here to make for a great visual experience.

Goemetry Dash retains the gameplay and music that made the series popular, and you can notice the better graphics, but the level design isn’t on par with the original game or Meltdown. 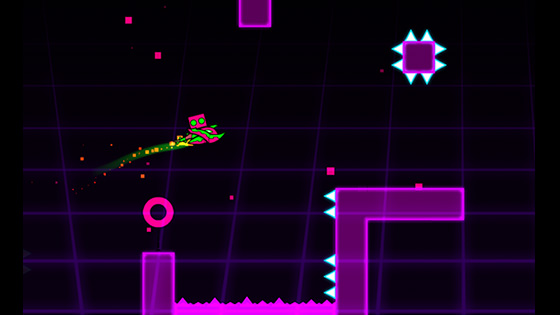 This time around the levels are way too short and easy to finish compared to the games that came before; while there is more stuff to unlock on the store and the addition of a world map is welcomed, fans of the series may be disappointed; but new players have a nice way to discover and enjoy the series, given the lower difficulty.

Geometry Dash World is free to download on Google Play and the Apple App Store, but everytime you beat a level, you’ll see a 30 seconds video ad, and since the stages here are kinda short, it’ll become pretty annoying. You can buy the no ads version for 3 dollars, and that’s an expensive price to pay for only 10 levels that aren’t as long as the other games in the franchise.

Geometry Dash World is recommended for players that haven’t tried the previous game and want to enjoy a good runner platformer with rhythm elements and great tunes. If you’re a fan of the series and were expecting the same challenging long levels, you may be disappointed, but still, give it a try. Pros Cons